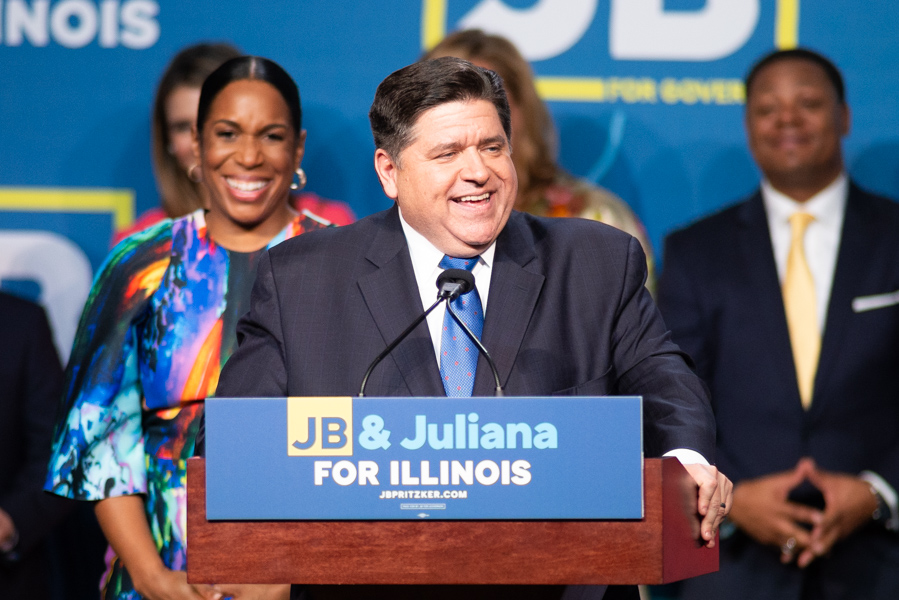 Gov. J.B. Pritzker speaks at his victory party at the Marriott Marquis hotel in downtown Chicago. At his inauguration, Pritzker said he would work with the legislature to pass a balanced budget.

In a speech directly following his inauguration, held at the Bank of Springfield Center, he emphasized the need for Republicans and Democrats to pass a balanced budget, something Illinois lacked for two years of Republican Gov. Bruce Rauner’s term. Between 2015 and 2017, Illinois was in a fiscal impasse, and lawmakers only managed to pass a budget when the state legislature overrode Rauner’s veto.

“But be clear about this: I won’t balance the budget on the backs of the starving, the sick, and the suffering,” Pritzker said in a prepared speech. “I won’t hollow out the functions of government to achieve an ideological agenda — I won’t make government the enemy and government employees the scapegoats.”

Pritzker outlined other progressive policy initiatives, including the legalization of marijuana and a $15 minimum wage. As one of his first acts in office, he said Illinois will join the U.S. Climate Alliance, a collection of states upholding the goals of the Paris Climate Accord. President Donald Trump withdrew the U.S. from the agreement soon after he assumed office.

The success of these policies will rely in part upon the governor’s ability to work with state House Speaker Mike Madigan — now in his 18th term — the longest serving speaker of a state House in U.S. history. Madigan is considered by many to be one of the most powerful forces in Illinois politics, and his interactions with governors and fellow legislators have shaped much of the state’s recent political past.

Pritzker said the state government needs to be more efficient, and that the current regressive tax system is “unsustainable,” making the middle class pay twice as much as the wealthy pay. The Illinois state constitution currently mandates a flat income tax in which all citizens pay the same rate, regardless of income. A report by the Center for Tax and Budget Accountability found that “the top one percent of income earners pay just 4.6 percent of their income in State and local taxes, while the middle 20 percent of workers pay more than double that, coming in at 10.8 percent of income.” He added that with less government waste, he will be able to attract new jobs and businesses for Illinois.

“The most pressing issue is establishing a tax plan: a real, cohesive, actual tax plan that can get passed in the capital,” de Boer said.

Pritzker’s inauguration — along with those of Lt. Gov. Juliana Stratton, Comptroller Susana Mendoza, Attorney General Kwame Raoul, Secretary of State Jesse White and Treasurer Mike Frerichs — means that Democrats now have control of every statewide office. The “incomparable” Stratton, as described by Pritzker, drew much applause from Monday’s crowd as she became the first African-American lieutenant governor in Illinois history.

Pritzker said his cabinet will be the most diverse of Illinois’ history, bringing to the table backgrounds and experiences that he said he does not have.

“To lead well, all of Illinois must be represented in the decision-making,” Pritzker said. “I want all of the children of Illinois to see someone that looks like them in our government.”