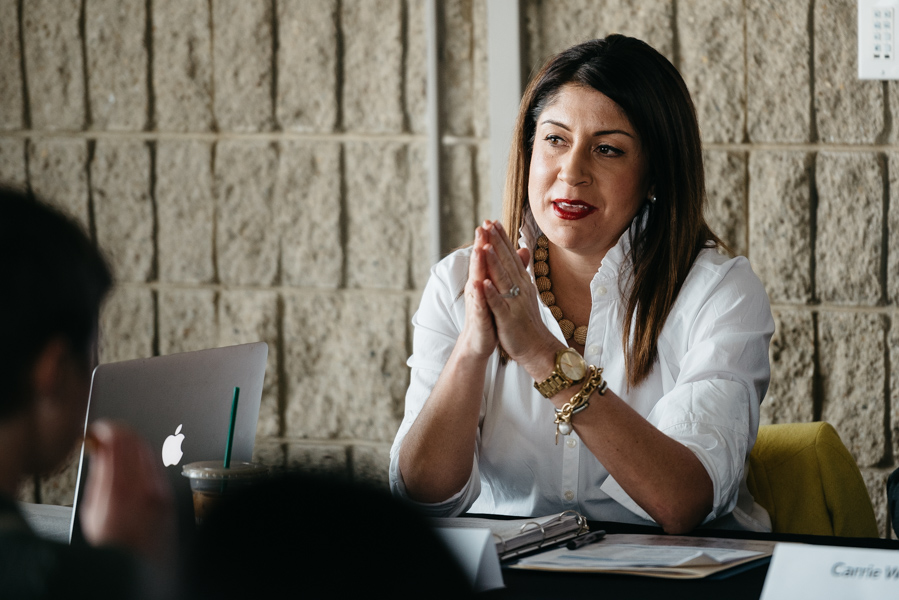 Sarah Wake, the University associate vice president for equity, speaking on a panel about upcoming changes to Title IX. Panel members expressed their concerns that these changes would make universities less safe.

Officials from the Center for Awareness, Response and Education and the Office of Equity expressed concern that proposed changes to federal Title IX rules would make students feel less safe.

During a Friday panel hosted by student groups and the Office of Equity, students and University officials said changes in the process of Title IX investigations could make complainants feel isolated.

The panel comes during the 60-day period leading to the finalization of the proposed changes by the U.S. Department of Education. During this period, the public can submit comments for the government to consider. The panel was an attempt to provide students a better understanding of the proposed changes, said Serene Singh, the director of the Sexual Health and Assault Peer Educators. SHAPE was one of the student groups that hosted the panel, along with Men Against Rape and Sexual Assault and Associated Student Government.

“We wanted to put together a space in which we could, with representatives from Northwestern, outline how this Title IX process works currently at Northwestern and what the current changes made at the federal level were and in turn how those would affect us,” Singh said.

Under the rules, colleges would be allowed to chose one of two standards for investigating complaints — so long as it is consistent. Some choose the “preponderance of the evidence” to assess a case, while others demand “clear and convincing evidence,” the higher of the two. This however, leads to differing standards of judging discriminatory activity or assault, Law Prof. Deborah Tuerkheimer said.

Under Illinois law, Northwestern will be required to keep the “preponderance of the evidence” standard.

Another change –– implemented to ensure a fair investigation, according to Secretary of Education Betsy DeVos –– would require cross-examination by both the accused and the accuser. Tuerkheimer said cross-examinations can get “ugly” and can easily lead to equity issues.

Wake also expressed concern over changes that would no longer mandate investigations into off-campus incidents. This would limit the role universities play in ensuring students’ safety and maintaining a secured community, she said.

The definition of “sexual harassment” will also become more rigid, which may lead to certain acts of sexual aggression being dismissed as “not bad enough,” said Carrie Wachter, the CARE assistant director.

Wake, however, clarified that NU would still have resources available to aid students despite these proposed changes. The University has always adapted its model and has taken deliberate steps to refine the process, she said.

To promote community involvement, the event gave students an opportunity to voice their opinions through handwritten postcards to the government. These letters included changes they feel should be made to the proposed regulations.

“We as students have a powerful voice for several reasons,” said David Fishman, a former Daily staffer and the director of MARS. “We are young voters and we represent the future and we have to live with and engage with this process. So we need to raise our voices in objections to parts of the process we don’t agree with.”