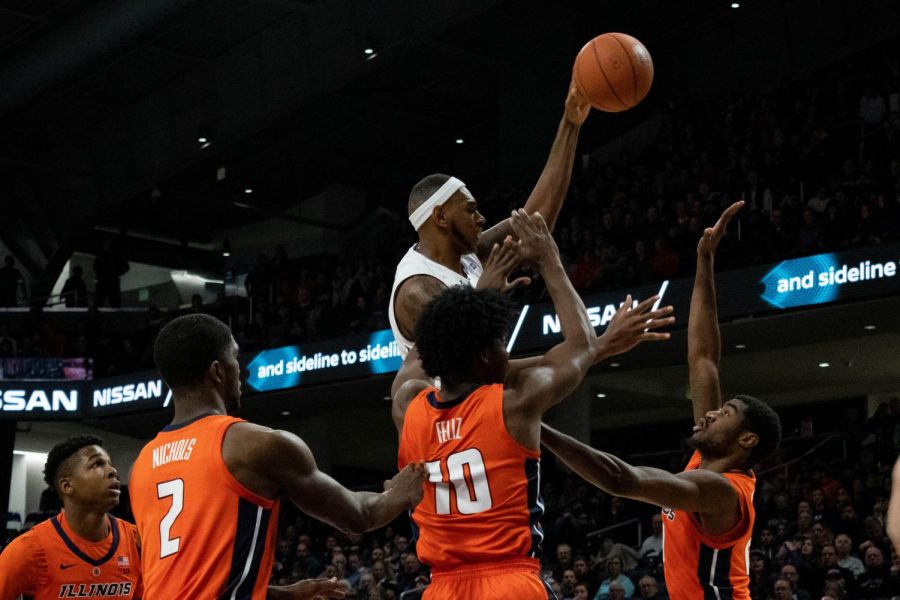 Dererk Pardon looks to pass. The senior center was a bright spot for the Wildcats on Sunday.

Eleven days ago, Northwestern traveled to the state of Michigan looking for a season-changing upset win. The game, against then-No. 8 Michigan State, ended poorly; the Wildcats were blown out by 26 points.

But the Wolverines reacted well to NU’s pregame changes; Michigan started the game on a 10-0 run and forced Collins to call a timeout less than three minutes into the matchup. Pardon and Kopp scored 16 early points for NU and began to find a rhythm for the Cats, but NU struggled to hold on to the ball and turned the ball over four times in six possessions.

The Cats made relative adjustments at the break and started the second half attacking the rim, cutting Michigan’s lead to 13 at one point. But the Wolverines kept rolling, riding a career-high 24-point performance from guard Zavier Simpson and a monster first-half showing from Jon Teske to claim the win.

1. The Cats missed Vic Law. It would’ve been difficult for a healthy and complete NU to stop a Michigan team with this caliber of talent. It was therefore nearly impossible for the Cats to pull off the upset without their leading scorer. Law’s absence was felt on both ends of the floor. Offensively, the Cats relied on and forced the ball into Pardon’s hands. Defensively, NU couldn’t get any stops and struggled to defend Michigan’s perimeter attack — the Wolverines’ 40 percent was the third-best an opposing team has shot from beyond the arc against the Cats this season.

2. Despite the loss, Pardon had another strong showing. In an offense missing its leading scorer in Law, Pardon took a season-high 16 attempts and finished with 20 points, cracking that number for the third time this season. He’s continued to bring his best game against the top opposition; those three 20-plus points performances have all come against Big Ten teams. If Law’s injury keeps him out of any of NU’s next games — an away trip to Rutgers and a home rematch against Indiana are coming up on the schedule — Pardon will likely continue to see more attempts and more points.

3. Michigan is a Top 5 team for a reason. To put it bluntly, NU was overmatched and outplayed. Jon Teske and Zavier Simpson scored more points together for the Wolverines (29) than the Cats scored (28) in the entire first half. Teske, a center by trade, hit three 3-pointers and shot an astounding 88 percent from the field on eight shot attempts during the first half. Michigan struggled briefly with foul trouble in the second half, collecting seven fouls in the first ten minutes, but a handful of explosive plays assured that the Wolverines would claim their 17th straight win and keep their undefeated season alive.