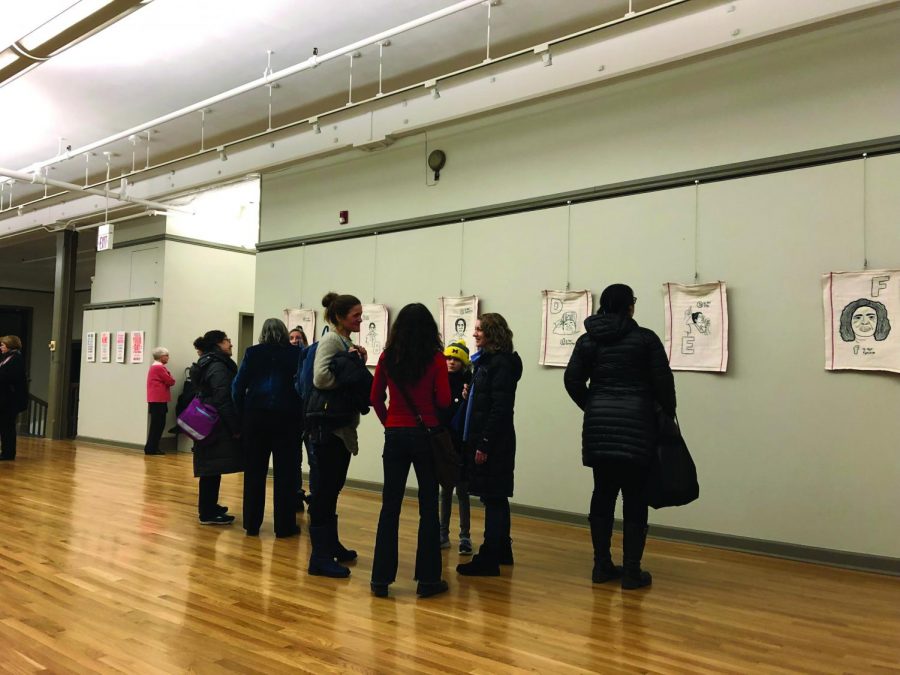 Attendees of the exhibit view Melissa Blount’s dishtowel portraits. The exhibit, “Word,” debuted at the Noyes Cultural Arts Center on Friday and will run until March 7.

A pair of Evanston artists are honoring the contributions of black women throughout U.S. history in a new exhibit unveiled on Friday.

With Billie Holiday music in the background, about 50 people browsed Ben and Melissa Blount’s letterpress prints and embroideries at the Noyes Cultural Arts Center on Friday. The exhibit, titled “Word,” will be on display until March 7.

“I thought it would be nice to talk about the contributions of black women,” Ben Blount said. “Thinking about politically how black women have made such an impact and when you think about stuff like the #MeToo movement, even going against politicians in Chicago and Black Lives Matter—all kind of spearheaded by black women.”

Ben Blount used a letterpress to create word-based art, featuring phrases like “Mother of Civilization,” “Toasted With Beauty” and “Bronzed in Elegance” over brown-and-pastel-colored backgrounds. He also created a series featuring the words and accomplishments of black female authors like Maya Angelou, Alice Walker, Toni Morrison and Octavia Butler.

Melissa Blount’s pieces depict the faces of prominent black women embroidered in yarn, with one person for each letter of the alphabet. She used dish towels as her canvases for faces like Assata Shakur, Fannie Lou Hamer, Ida B. Wells and Josephine Baker.

“It was fun because we got to do a lot of research and learn about people beyond Rosa Parks and the people you hear about every year in Black History Month,” Ben Blount said. “We got to kind of dig a little deeper.”

Angela Allyn, the cultural arts coordinator for the City of Evanston, said she originally approached Ben Blount about contributing to the center’s annual Black History Month exhibit. The exhibit, though it started in January, will run through Black History Month in February.

Melissa Blount will also host an embroidery event in the future, and Ben Blount will bring his letter press for people to make their own prints as part of the gallery.

Allyn got the idea for the gallery while thinking about the power of language. The title comes from her musings about the word “word” and its colloquial meaning as an expression of truth. She was also particularly interested in Ben Blount’s art with the letter press, the same tool used by 19th-century abolitionists to spread the word and print newspapers.

Allyn said she was impressed with the Blounts’ pieces, especially Melissa Blount’s work with the “iconic” dish towels.

“The idea of taking this humble object that’s for cleaning up messes and using that as the background for these women is so important,” Allyn said. “This idea that African-American women had been pressed into servitude, and now we are sort of elevating that servitude and that ability to clean up a mess to an art piece in an art gallery.”

The gallery also features several interactive pieces. At the end of the exhibit, viewers are invited to answer the question, “What is your word?” on a whiteboard. Visitors can donate books by black authors in a “Reading Corner” at the end of another hall.

Yvette Granberry (SESP ’79), who attended the event on Friday, said that black women are the key to black history.

“I’m always proud to see black artists in particular, female black artists showcased so that folks know their work,” Granberry said. “We’ve made lots of contributions and a lot of them have been overlooked over time.”