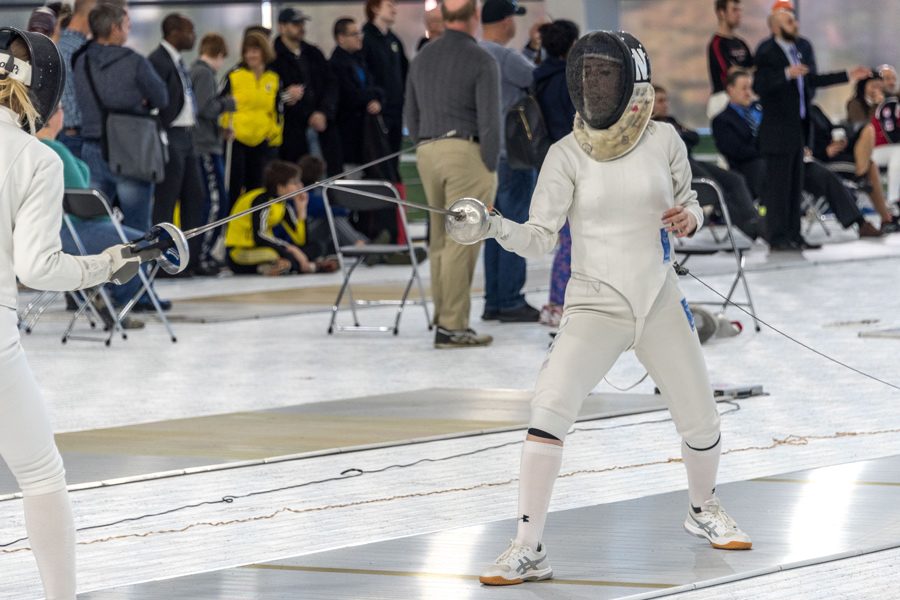 A Northwestern fencer fences. The Wildcats hope to go undefeated this weekend.

Northwestern has simple expectations for its first collegiate competition of 2019: win every match.

The Wildcats will return to the duals format this Sunday at the Western Invitational in Colorado Springs, Colorado. The deep team comes into the meet with a 16-1 record for the year and is fresh off a solid showing at the USA Fencing January North American Cup in Charlotte last weekend.

Coach Zach Moss is confident in his team and its growth. About two-thirds of his fencers are underclassmen, and he said he’s seeing strong performances from first-years all the way up to seniors so far this year.

Lombard pointed to the team’s depth in explaining what makes practice so competitive and beneficial for the team.

“I think that every single squad has a ton of potential, just down to the last person,” she said. “We have the ability to really challenge each other and push each other, and there’s really not a clear consensus of ‘Oh, these four people are always going to win everything.’”

In this environment, Lombard never feels complacent around the team. That’s especially important in meets like the Western Invitational, where the Cats are favored.

“We focus on what we can control. We focus on making every single bout, every single round the best that we can, not only from a fencing perspective, but also in supporting our teammates.” she said. “We need to invest as much energy and as much focus as we can, and that should hold true whether it’s someone that we, on paper, should easily beat, or whether it’s the defending national champions.”

First-year Robyn Song, who placed 27th in Division I sabre at NAC, noticed NU has better teamwork than most college teams. The Cats always huddle and give shoutouts after meets, and as Song was adjusting to collegiate fencing during fall quarter, she found leaders all around.

“There’s not only one person that tries to help me, it’s like my entire team,” she said. “Even if they’re not my weapon, not just sabre squad, like foil and epée, they’re also all trying to help.”

Lombard said she is pleased with the direction the team is headed, and is glad to see the new class working hard as a team. Moss said NU’s process is the same, whether they’re facing powerhouse Notre Dame in a few weeks or the seven-team field in Colorado Springs on Sunday. Lombard and Moss both said they trust the established process.

“It’s going to come down to just performing consistently, approaching each bout, each match the same way,” Moss said. “If we do that, we should walk away 7-0.”