Day of service to replace Chicago Women’s March this year 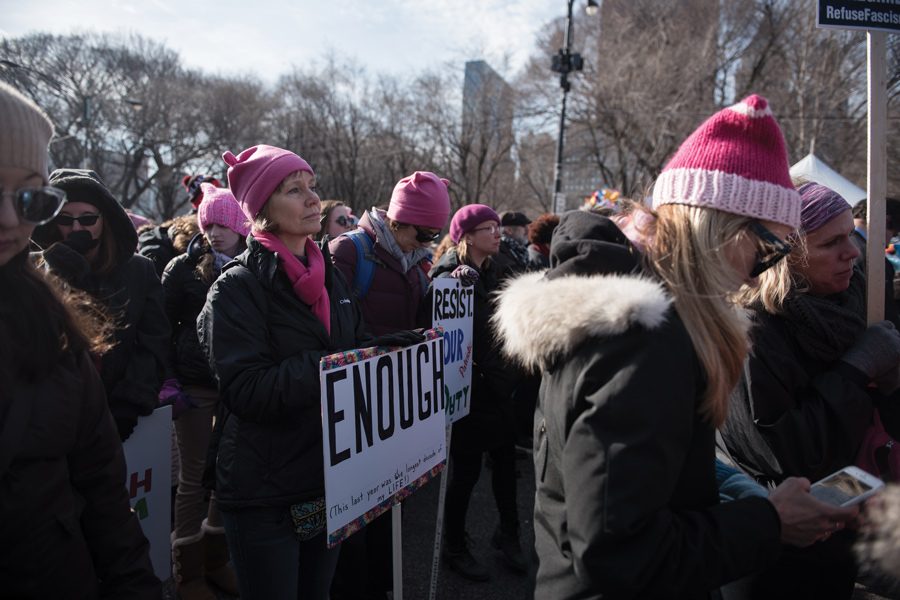 A woman holds a sign saying “Enough” at Women’s March Chicago 2018. The organizers announced a service day in lieu of a march in 2019.

In lieu of a march on Jan. 19, Women’s March Chicago will host Operation Activation, a day of community organizing to help others feel safe, included, respected and empowered.

Chicago organizers announced in November they will not host the annual Women’s March amid rising controversy about the national organization’s link with Nation of Islam Leader Louis Farrakhan following his anti-Semitic comments.

According to a Jan. 9 news release, Women’s March Chicago created a page on Persist List — a website listing political events in the city — to promote the events scheduled for January 19. If people register their event at the march’s official website, it will be added to the page, Women’s March Chicago’s website.

So far, events for Operation Activation include sorting and collecting clothing for Chicago’s homeless and volunteering with Planned Parenthood. Participants also have the option to write postcards to legislators advocating for automatic voter registration, sensible gun laws and the DREAM Act, a bill granting legal status to certain undocumented minors.

In the release, Women’s March Chicago board president Jaquie Algee said all types of action can help.

“We applaud social actions, civil actions, roundtables and fundraisers — any action, large or small — that aligns with Women’s March Chicago’s mission, which focuses on women and their allies in our communities,” Algee said.

Samantha Baldwin, a Medill sophomore, went to the Chicago march in 2018. Though she was surprised that Chicago would not march on the anniversary, she said doing something tangible this year could be meaningful.

“I actually think that the day of volunteering will be really awesome and go well,” she said. “I think it would be really cool for people to feel like they’re getting involved not just by marching, but by physically doing something where they can see results. I know I would definitely be interested in doing that.”

Medill junior Emma Steinberg, who marched in San Francisco in 2017 and Chicago in 2018, said she was upset Chicago wouldn’t host one this year.

“It was really important in 2018 to show that we’re still here, and we’re not going away — that’s why I actually cared more about going the second year,” she said. “I guess I’m kind of disappointed that it’s not happening because we’re not having that powerful stance again.”

In the release, Women’s March Chicago said they encourage individuals who want to march to join in other Illinois marches in Rockford, New Lenox and Geneva.

Algee also said that Chicago would host a Women’s March in 2020 encouraging people to turn out for the elections.

“The 2020 elections are going to be the elections of our lifetimes,” Algee said. “We are going to pull out every stop to make sure that voters are educated, registered, energized and, most importantly, that they vote.”