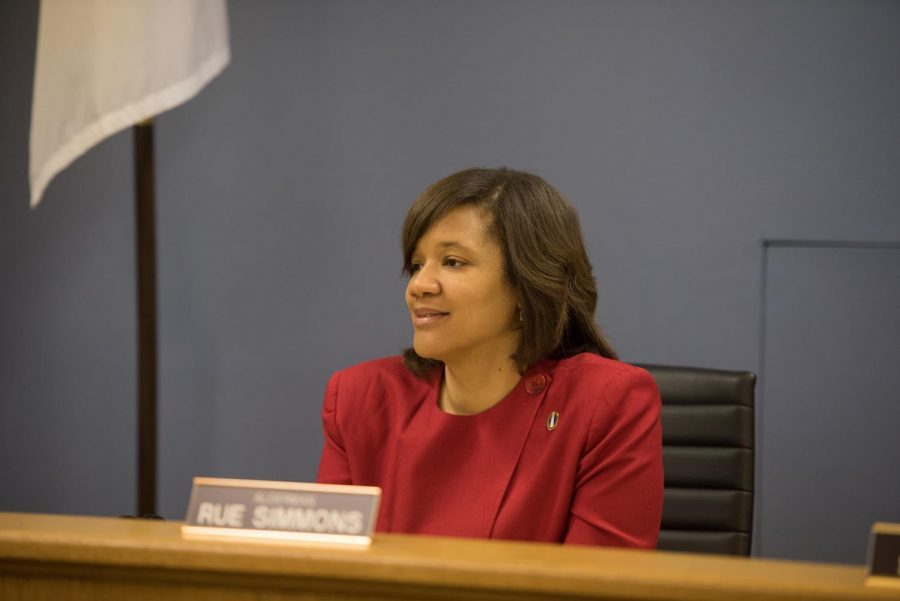 Ald. Robin Rue Simmons (5th) sits at a city council meeting in 2017. Council approved a resolution to allow Kane, McKenna and Associates, Inc to complete a study and redevelopment plan of a new tax increment financing district in the 5th Ward.

City residents raised concerns about a recent land acquisition of over $2 million at a 5th Ward meeting Wednesday.

The lot, which was purchased by Domanus Development, starts on the corner of Jackson and Emerson and stretches to the informally-named “graffiti house.” The acquisition only has one sign on one yard but, in reality, “represents many lots,” said Ald. Robin Rue Simmons (5th), who hosted the meeting.

The developer plans to turn the land into micro-luxury units of townhouses and condos, according to Rue Simmons. The developer’s website already details how the unit could look, but Rue Simmons said the developer has made no effort to attend a community meeting.

“It’s a lot of working investment before (coming) to the community,” Rue Simmons said. “I have reached out to them … and told them it’s mandatory they come to a meeting.”

Evanston resident Danyiele Francello — who lives at 1917 Jackson Ave. — said she will be affected by this acquisition. Francello received a text from her landlord earlier today, informing her that the building had been sold. Even with a full-time job at Evanston Township High School, she doesn’t think she can afford higher rent rates.

“I feel like they’re trying to uproot us out of the 5th ward for these prime properties and lots, that is very valuable,” said Francello. “Just the essence of Evanston — we’re being stripped, we’re being robbed of that. Everything is a condo, everything is a townhome.”

Evanston’s inclusionary housing ordinance requires developers to make 5 percent of their units affordable, but the developer choose to pay a fee-in-lieu — a flat rate paid out instead of including affordable units. The properties to be demolished include affordable units rented by families. Rue Simmons said she has has already spoken to the developer about rectifying this issue.

The 5th Ward is home to the first four units of inclusionary housing in Evanston, located on Noyes St. across from D&D Finer Foods. Although her ward leads the way on affordable units, Rue Simmons recognized there is still work to be done.

Francello noted rents, in general, are at an all-time high. She said a unit she used to live in for $500 a month currently sells for $1,100.

Local landlord Tina Paden of Paden Properties said the city won’t aid her or the landlords in providing affordable housing.

“If I can’t get help, how am I going to help anyone else?” Paden said. “I need to put my oxygen mask on first.”

In 2018, Rue Simmons got a matching grant approved for property owners who rent to qualifying low-income residents. The grant is intended for home improvements. However, Paden said she has to come up with the money first before she can get the rebate.

If the development goes through, Rue Simmons said she plans to use the money from the acquisition toward affordable housing.

“They have to go through dapper, planning commission, there might be zoning variances,” Rue Simmons said. “It is an extensive process. You don’t come to Evanston and decide what you are going to do and just move forward without a lot of checks and balances.”