Zhang: I don’t major in RTVF for the classes 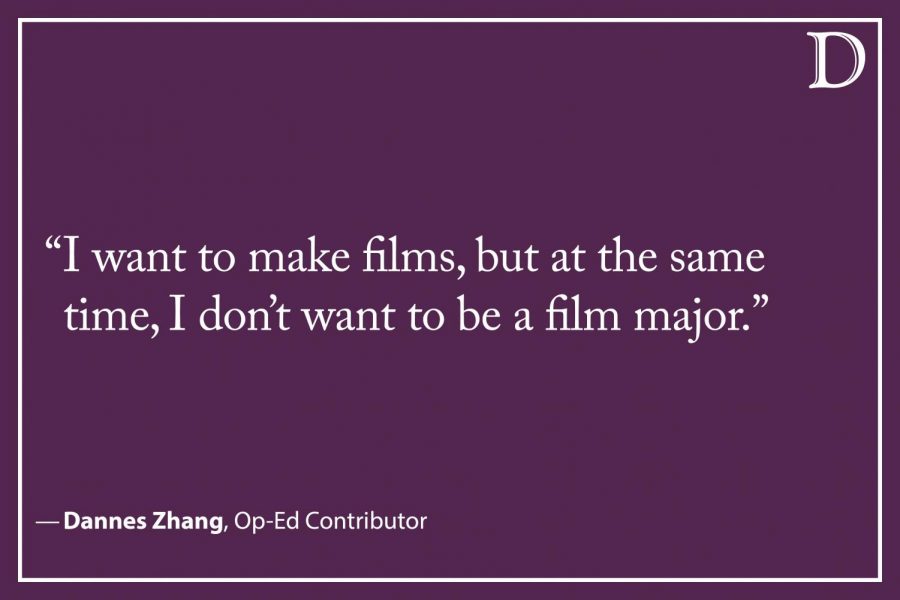 Every week in high school, for two or three times a week, I would walk down the art hall, enter classroom A107, and sit down among a clutter of documents, misplaced SD cards and stationery. My teacher Mr. Gran taught me about Marxist theory, the French New Wave and David Lynch’s “Twin Peaks” in that classroom, but the most memorable lesson I learned from him was that film teachers didn’t need to be organized. He made sure to drill that in our heads whenever a student questioned how he was able to find anything on his chaos of a desk. I always found his messy classroom to be an expression of who he was and felt comfortable in his authenticity. In that room, I began my journey into the world of cinema. In that room, I developed a love for film history, film theory, and of course, filmmaking.

But I knew there were a multitude of paths I had not yet explored. I was fortunate to have attended a high school that offered film classes, but there were other classes I didn’t even know existed. I was not under the right environment to pursue many of my interests. That was why I chose Northwestern (AND is in our DNA, am I right?) and, since I wanted to major in film, applied to the School of Communication.

Recently, I have been questioning whether I should remain an RTVF major. At Northwestern, so many disciplines pique my interest. As a starry-eyed little freshman girl, I find everything absolutely fascinating. Yet I find that other majors tug at my sleeve, pushing me to drop out of RTVF. Especially when I account for factors that go into pursuing a film education.

The popular opinion among filmmakers is that attending film school is not necessary to become a filmmaker. In fact, most directors whose names you see on the big screen did not get a film degree: some majored in something else, some majored in film but dropped out, and some did not attend university at all. Quentin Tarantino, Edgar Wright, Wes Anderson, Christopher Nolan, Alfred Hitchcock and David Lynch are just some of those directors. They thrived despite their lack of a film degree.

When I graduate, I want to have the ability to direct and shoot my own films. Yet I remember Mr. Gran telling me that film school doesn’t cultivate directors. This is even truer at Northwestern, where there is not a single film directing course (aside from a Directing Sequence program offered only to seniors admitted through an application process). Film school graduates who enter the film industry often become film critics, gaffers, grips, producers, assistant cameras, production assistants — usually anything but a director. And why would we test our luck in uncharted waters, when we can rely on our degree that trained us only in film analysis and technical aspects of film?

But as I was wandering around my hometown during Winter Break, I had a realization. I was genuinely excited when I saw “Sorry to Bother You”, a comedic film about capitalism and modern slavery, at the Norris University Center last quarter. My excitement was a physical sensation. It was a bubble that warmed up my stomach and grew and grew until it burst, out of which flowed a heat that swept over my entire body.

Why was I excited? Yes, it was a great film, but beyond that, its aesthetic and storytelling spoke to me, inspiring within me the desire to create. I assume it’s similar to how dancers get happy feet after watching a great dance performance or how programmers feel when they see a stunning line of code.

My realization complicated things: I want to make films, but at the same time, I don’t want to be a film major.

Thankfully, I’m not a film major specifically. I’m an RTVF major in the process of looking for a double major. Now, what does that mean, exactly? It means I can pursue my love of film while discovering new veins of interest that overlap with film — philosophy, sociology, marketing, etc. Even the RTVF major itself is an overlap of theory and application. As a result, the major can lead to other careers outside of the film industry — media companies, online publications, advertising agencies, etc.

It is true, people can obtain a film education without a film degree. But it is difficult to obtain an interdisciplinary education incorporating film without an RTVF degree. The degree is not just lectures inside of a classroom. It comes with resources, extracurriculars, friends and professors that allow students to learn any and all reaches of film.

Navigating a film education is difficult, as I’m sure other disciplines are as well. Each path is different for every person, and when the receipt of a good education is in my hands, it takes a long time to customize my education. But college is the time to explore, get lost and feel confused. Honestly, it’s not just defensive film teachers who don’t need to be organized. It’s also me.

Dannes is a Communication first-year. She can be contacted at [email protected] If you would like to respond publicly to this op-ed, send a Letter to the Editor to [email protected] The views expressed in this piece do not necessarily reflect the views of all staff members of The Daily Northwestern.