Men’s Basketball: Northwestern dominated by No. 8 Michigan State in 81-55 loss 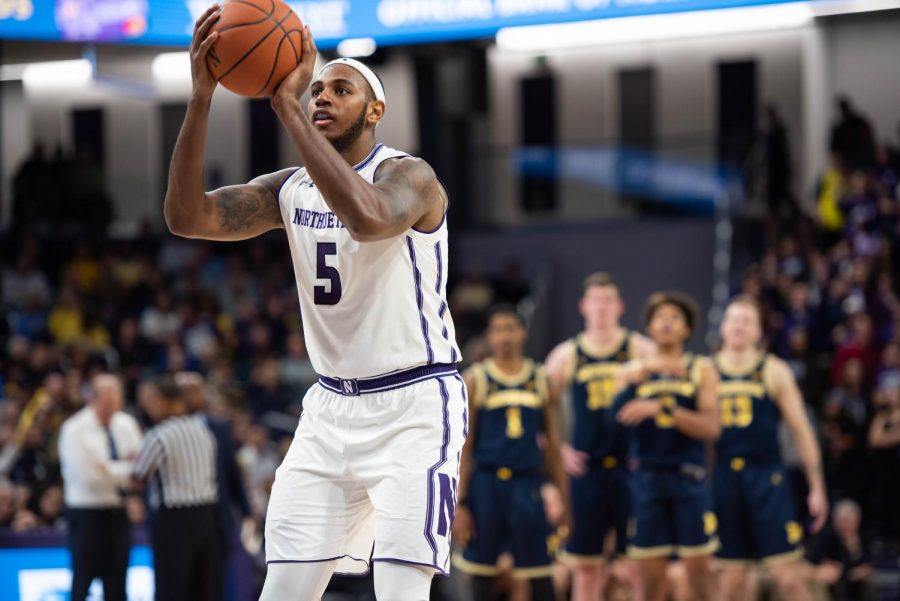 When Northwestern and Michigan State last met on Feb. 17, 2018, the game was defined by its second half: the Spartans, then ranked No. 2 in the country, mounted a 27-point comeback to squeak out a 65-60 win.

When the two teams met again to start the new year, it was the first — not the second half — that was the game’s defining moment, but the end result was the same.

Battling foul trouble and a dominating Michigan State performance down low, the Wildcats (9-5, 0-3 Big Ten) were steamrolled by the Spartans (12-3, 3-0) in a 81-55 loss in East Lansing on Wednesday. Michigan State scored nearly as many points in the first half and in the paint — 52 in both — as NU scored in the game.

“A lot of times as a coach, you always think about the things you didn’t do and you get disappointed, but you also have to understand that you’re playing against a really good team that makes you do things poorly sometimes,” coach Chris Collins said in the postgame news conference. “It wasn’t our finest hour, but a lot of it also has to do with how good Michigan State is.”

Senior forward Vic Law, junior forward A.J. Turner and senior center Dererk Pardon each racked up three personal fouls in the first half and struggled to get anything going offensively as a result. NU shot 34 percent from the floor, its worst showing of the season so far. Pardon finished with a team-high 19 points, but his absence hurt when foul trouble sent him to the bench, and Law — NU’s leading scorer — managed only two shots for 5 points the whole game.

The Cats started the game off on a strong note, shooting 5-for-7 from the floor and limiting the Spartans under the basket, but near the halfway point of the first half the tide started to turn. NU was called for seven personal fouls in the first ten minutes of the game.

As Michigan State center Nick Ward — who scored all of his 21 points in the first half — found his rhythm underneath, the Cats were unable to adjust to the Spartans’ toughness and physicality.

“You try to simulate what they do, and it’s impossible in practice,” Collins said. “They’re a really physical team that puts a lot of pressure on the officials with the way they post and the way they drive the ball.”

When Pardon headed to the bench with two fouls with 11 minutes to go in the first half, the Spartans took advantage, scoring 12 points and forcing the center’s replacement in junior Barret Benson to also collect his second foul. Once Pardon checked back in, Michigan State went on a 21-2 run, and eventually took a 52-32 lead into halftime.

Not much changed in the second half — after starting the game with a strategy of not double-teaming Ward to prevent open outside shooters, Collins said, the Cats were forced to bring more help to the paint to slow the Spartans down. NU showed some signs of life in the second, forcing 11 turnovers and holding Michigan State scoreless for a six and a half minute stretch, but the damage had already been done.

“That wasn’t the Northwestern team that I’ve seen,” Spartans coach Tom Izzo said after his team’s win. “They’re better than that. It was just a bad night for them, and yet I thought there was about a 16-minute point in the first half that Michigan State played as good as it’s played this year.”

The Wildcats have beaten Michigan State just four times in 40 matchups since Izzo took over in East Lansing in 1995 and will have to wait a little longer for win number five. The team’s focus now turns to Saturday’s home contest against Illinois (4-9, 0-2) and finding the group’s first Big Ten win of the campaign.

“Whenever I’m a part of something where you get beat like that, you get knocked back initially but there’s got to be a little bit of anger too,” Collins said. “It’s not fun to get beat like that, so you’ve got to turn that emotion into controlled anger as you get ready for your next game, and hopefully that’s what we’ll do.”