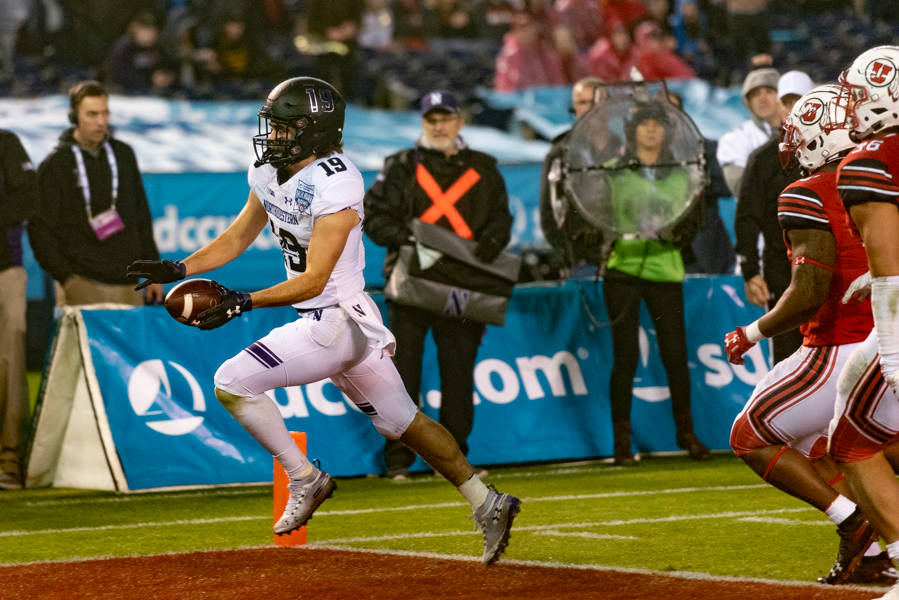 Riley Lees lunges into the end zone for a Northwestern touchdown. His score was one of four in the third quarter that propelled the Wildcats past Utah in the Holiday Bowl.

SAN DIEGO — This coastal, tropical city seemed an unlikely locale for a driving deluge on New Year’s Eve. Northwestern’s depleted defense seemed an unlikely unit to suddenly scoop up takeaways like it made tackles. The Wildcats’ offense, all but left for dead in the first half, showed few signs of getting hotter than the chilly night.

The decisive quarter unfolded in almost surreal fashion for the Cats, who scored on a two-play drive, returned a fumble 82 yards for a touchdown and forced forced two turnovers in a five-play span. By the time those fateful 15 minutes came to a close, NU — which tallied six total takeaways — had a two-possession lead and was well on its way to a third straight bowl victory for the first time in program history.

“You could just feel the momentum shift,” a jubilant coach Pat Fitzgerald said. “To get the turnovers and create short fields was the key. … We settled in, we settled down and the guys, credit goes to them.”

That performance came in sharp contrast to the first half. NU punted on four of its first five drives — including two consecutive ones that ended with negative yards — as Utah scored a pair of touchdowns just four minutes apart.

Momentum turned away from the Cats on several occasions. They were stopped on fourth-and-inches at their own 45 after the first Utah score, giving the Utes a short field for their second touchdown. Later, after consecutive chunk plays got NU to the 3-yard line, the Cats stalled and were forced to settle for a field goal.

But in the second half, the momentum ricocheted back in NU’s favor.

The first touchdown, on a two-play drive punctuated by a 53-yard catch by sophomore receiver Ramaud Chiaokhiao-Bowman on the Cats’ first play of the half, came less than two minutes into the third quarter. NU then rattled off 21 points in exactly five minutes of game time despite running just eight offensive plays and gaining only 98 yards.

Instead of plodding, methodical drives, NU made its mark with several explosive plays. It began at an unlikely place — the Cats’ 6-yard line — when defensive end Joe Gaziano forced a fumble and Jared McGee picked up the loose ball. Eighty-six yards down the field, the senior safety had made the game a one-possession contest.

“The big guys up front were doing a great job all game flushing their quarterback out of the pocket, and they really got home on that play,” McGee said. “I was like, ‘Oh! Ball!’ I scoop it and take it to the house. … I told (my teammates) I’m fast now.”

Rarely used superback Trey Klock put NU ahead with a trick play touchdown — on the first catch of his career — after another Utah fumble, then receiver Riley Lees added a rushing score from a Wildcat formation to give his team a two-possession lead.

The shellshocked Utes didn’t again get over the 50-yard line of the soggy, muddy grass.

“Did I think we were going to be able to create that amount of turnovers?” Fitzgerald said. “I love San Diego, but man I love it when it rains on gameday. That was sweet. … It was raining harder coming out of halftime than before the half, and I think that played a role on the field.”

But that didn’t tell the story of the most pivotal 15 minutes. As Utah coach Kyle Whittingham said of his team: “Everything in that second half was like a nightmare. One thing after another.”

For the Cats, however, it was a triumph on many levels. NU won nine games for the third time in four seasons. It won a bowl game for just the fifth time in program history. Thorson broke the program’s all-time passing yards record in the first half. And the three straight postseason victories represents one more history-making notch on Fitzgerald’s resume.

Fittingly, the Cats closed an unusual season in unusual fashion. NU rebounded from a woeful 1-3 start to win eight conference contests and reach the Big Ten Championship Game for the first time in its history. And when the horizon looked bleak, once again, on Monday night, the Cats roared back.

For Thorson, that means one indelible memory of his final college game.

“Winning. That third quarter, coming back, scoring 28 points, our defense kicking the crap out of them,” he said. “It was awesome.”