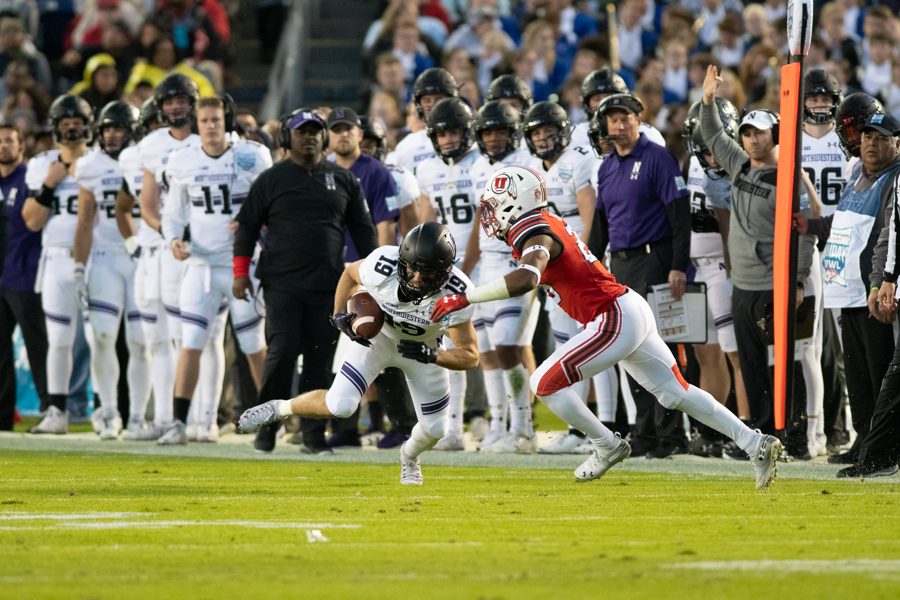 Riley Lees makes a move. The sophomore receiver and the Wildcats launched a stunning comeback to win the Holiday Bowl on New Year's Eve.

SAN DIEGO — In Northwestern’s stunning 39-34 loss to Akron in September, the Wildcats led 21-3 at halftime before collapsing in the second half with three game-changing turnovers that directly led to Akron points.

Against No. 17 Utah in the Holiday Bowl on Monday, it was No. 22 NU (9-5, 8-1) who channeled its inner Zips, storming back from a 20-3 halftime deficit to romp to a 31-20 victory inside a soaked SDCCU Stadium on New Year’s Eve, giving Pat Fitzgerald’s team a third consecutive bowl win for the first time in program history.

The Utes (9-5) were the better team for long stretches of the evening, dominating the line of scrimmage on both sides of the ball and finishing the game with more first downs and more yards than their midwestern counterparts. But they committed six turnovers to the Cats’ one, with four of them coming in an insane third quarter in which NU scored 28 points to take a 31-20 lead into the final frame.

The Utes looked to have things nearly salted away when they snapped the ball on the NU 6-yard-line leading 20-10 with 6:40 remaining in the quarter. But as Jason Shelley rolled to his right, he was strip-sacked by junior defensive end Joe Gaziano, and senior safety Jared McGee scooped the ball up for an 82-yard, game-upending touchdown.

The Utes next possession ended with a fumble, and Clayton Thorson then hit rarely used superback Trey Klock for a 20-yard touchdown pass that propelled the Cats ahead for good.

1. It was wet. It’s unlikely that any of the 47,007 people who purchased tickets to Monday’s game expected it to be played in 50-degree weather punctuated by driving rain, but that’s what they got. The surprising conditions greatly hindered the Utes offense, which fumbled four times while Shelley tossed two picks, one of which bounced off the hands of his intended receiver. It’s quite possible that without aid from the elements, NU would’ve had a different fate at the end of the game.

2. Thorson went out in style. The signal-caller carried the offensive load from the Cats in his final collegiate game, as NU tallied only 81 yards on the ground. He dropped dimes both to the sidelines and over the middle of the field, to everyone from Nagel to Trey Klock. Midway through the second quarter, he hit Kyric McGowan for a 32-yard gain that gave him the all-time Northwestern passing record. He finished with 10,731 career yards and will likely be a mid-round pick in the NFL Draft in April, though he departed Monday’s game in the fourth quarter after a hard hit along the sidelines.

3. It was a bizarre end to a bizarre season. Before McGee’s fumble return, ESPN gave NU only a 5 percent chance of winning. It’s safe to say the Cats’ chances of racking up nine wins were similarly low following the Akron loss. And yet they both won the Big Ten West — for the first time — and stood on the field at SDCCU Stadium as Holiday Bowl champions. It was a masterful turnaround by Fitzgerald’s squad and certainly one of the most memorable in program history.