Associate provost for University enrollment to retire after 14 years 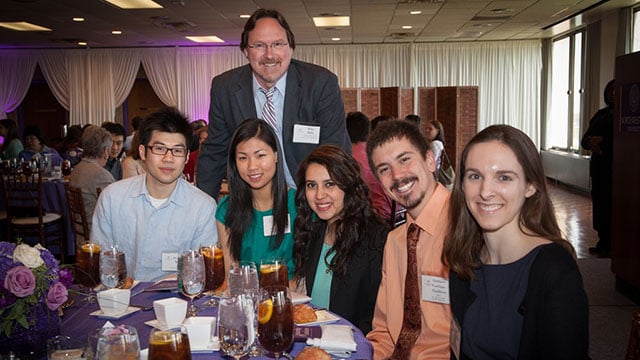 Michael Mills, above, with scholarship recipients in 2013. He will retire in April.

Michael E. Mills, the associate provost for University enrollment, will retire in April after working 14 years for Northwestern.

His retirement comes at a time when the admission practices of elite universities like Northwestern are under heavy scrutiny. Under Mills, the student body has included more students from underrepresented backgrounds.

As the associate provost, Mills oversees admissions, financial aid and the University’s registrar.

Mills said he was motivated by personal reasons to retire and that it felt like the right time to move on, according to a news release earlier this month. Before coming to NU, Mills served as director of admission at Miami University in Ohio, Alaska Pacific and the University of Alaska Fairbanks.

Provost Jonathan Holloway said in the release that he is grateful for Mills’ services.

“The academic qualifications of entering students, the presence of low-income students and the proportion of under-represented students are at all-time highs,” he said.

But similar efforts by other schools have gained the attention of critics. The U.S. Justice Department is looking into whether Yale’s and Harvard’s admissions are biased against Asian-American applicants, and some rejected applicants are suing Harvard claiming a similar bias.

Northwestern has said the outcome of the suit will likely not impact its own practices significantly, and has mostly stood idle as its peers are scrutinized.

Under Mills’ supervision from 2005 to 2018, application numbers rose from 16,229 to 40,425 and acceptance rates dropped sharply from 31 percent to 8.4 percent. Low-income students, who are defined as those eligible for a federal Pell Grant, increased from 8 percent to 20 percent.

Mills also encouraged more students from Chicago public schools to attend the University by helping create the Good Neighbor, Great University Scholarship, according to the release. The scholarship provides additional money for high school students in Chicago or Evanston who have demonstrated financial need.

Mills said his role has been “the job of a lifetime,” according to the release.

“In 14 years, I never experienced a single instance — not one — in which I didn’t look forward to going to work each morning,” he said. “I don’t know many people who can say that, and believe me, I know how fortunate I’ve been to be able to.”