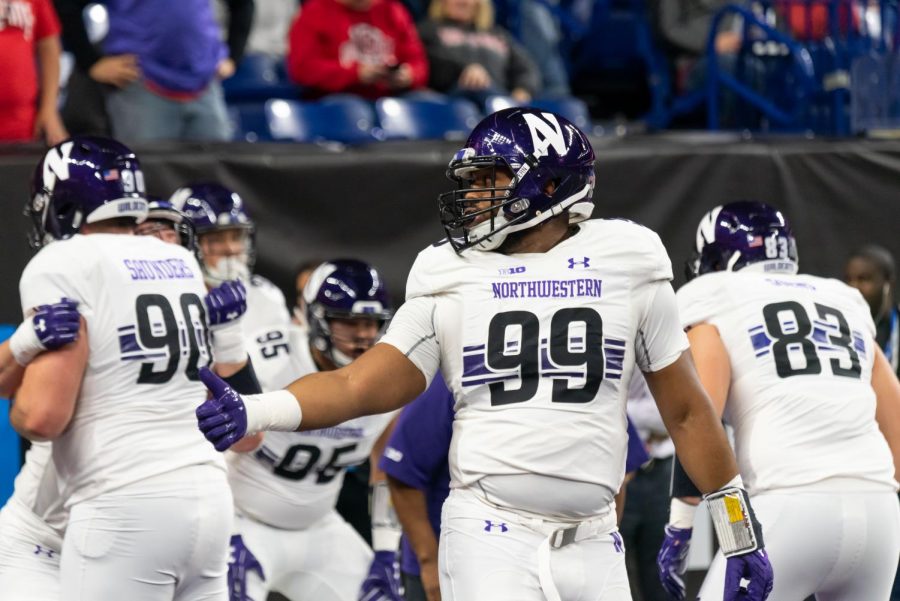 Jordan Thompson gestures before the Big Ten Championship Game. The senior will not play in the Holiday Bowl.

The last time Utah quarterback Jason Shelley took the field, he was held without a touchdown and to just 137 yards in the Pac 12 Championship Game by Washington’s defense. Against Northwestern in the Holiday Bowl on Dec. 31, the field might open up a little more for the No. 17 Utes against a defense that will be missing two key starters.

Senior linebacker Nate Hall and senior defensive tackle Jordan Thompson will both be missing the last game of the season, as announced on their Twitter accounts.

“Unfortunately, I have put on that purple helmet for the final time, as I had shoulder surgery that will cause me to miss the 2018 Holiday Bowl,” Hall said in a statement on Twitter. “Now I look forward to doing everything I can at practice and on the sideline in San Diego to help my classmates, my teammates and my university end 2018 with one final victory.”

Though Hall battled shoulder issues throughout the year and missed four games, he finished the season with 51 tackles, 5.5 tackles for loss, three pass deflections and All-Big Ten Honorable Mention recognition.

In 13 games, Thompson finished with 30 tackles, six tackles for loss and three pass deflections, but a recent knee surgery will force him out of the postseason game.

“Playing D-Line for Northwestern these last four years have been the best years of my life,” he said in a statement on Twitter. “I want to thank Coach Fitzgerald, Coach Long and all of our coaches for believing in me and making me the man I am today.”

Sophomore linebacker Chris Bergin and junior defensive tackle Alex Miller project to fill in the holes in the starting lineup ten days from now against Utah.