Women’s Basketball: Wildcats overwhelmed in paint in loss to No. 18 Marquette 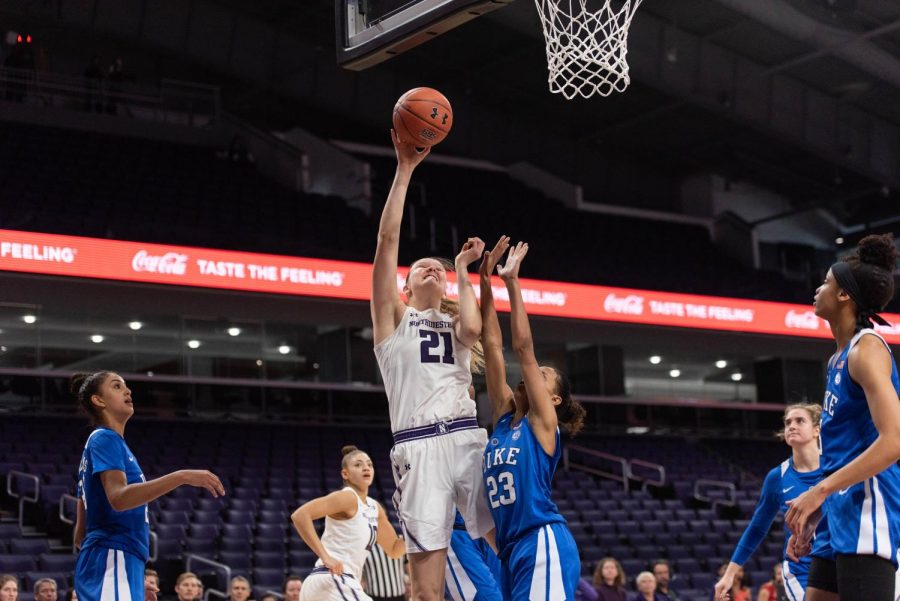 Abbie Wolf shoots a layup. The junior center had 11 points in the Wildcats’ win over Toledo in the second round of the WNIT.

The return of Pallas Kunaiyi-Akpanah was supposed to give Northwestern a paint presence the Wildcats sorely missed in Wednesday’s loss at No. 20 DePaul after she left the game less than a minute in due to injury.

The senior forward had a good game Sunday against No. 18 Marquette, earning a double-double with 14 points and 15 rebounds, but the rest of her team could not pick up the slack.

“Their quickness won out in transition,” coach Joe McKeown said. “When we were able to get the ball inside, our size hurt them, but we couldn’t do it enough.”

The star of the day for Marquette was 5-foot-8 guard Natisha Hiedeman, who finished with 17 points and 15 rebounds. Hiedeman did not start the game, but played 36 minutes off the bench and also led all players with six assists. She consistently beat out her taller opponents, like 6-foot-2 junior center Abi Scheid and the 6-foot-2 Kunaiyi-Akpanah, on the boards.

“They have five seniors that start the game, so you can see how they play off each other,” McKeown said. “They make you pay for the little mistakes that other teams don’t.”

The Cats’ offense struggled throughout the afternoon pushing the ball up the court, as the Golden Eagles’ swarming defense forced several tough passes. Marquette entered the game in the top 50 nationally in steals per game with 11.1, and the Golden Eagles maintained that pace Sunday, finishing with 11.

NU tried to keep feeding its post players — usually Kunaiyi-Akpanah and Scheid, as well as junior center Abbie Wolf for stretches when Kunaiyi-Akpanah needed a breather — but Marquette kept limiting the Cats’ opportunities inside.

“She’s a force down low, so give a lot of credit to her,” Marquette coach Carolyn Kieger [CQ] said of Kunaiyi-Akpanah. “We just tried to put different bodies on her, and try to react before she did.”

The Cats took the Golden Eagles out of their comfort zone briefly late in the first half and early in the third quarter, rallying to tie the game at 34 just two minutes after halftime. But after back-to-back 3-pointers restored Marquette’s lead for good, the Golden Eagles continued to punish NU in transition and on the boards. All but two of the Golden Eagles’ 19 fourth-quarter points came on either layups or free throws.