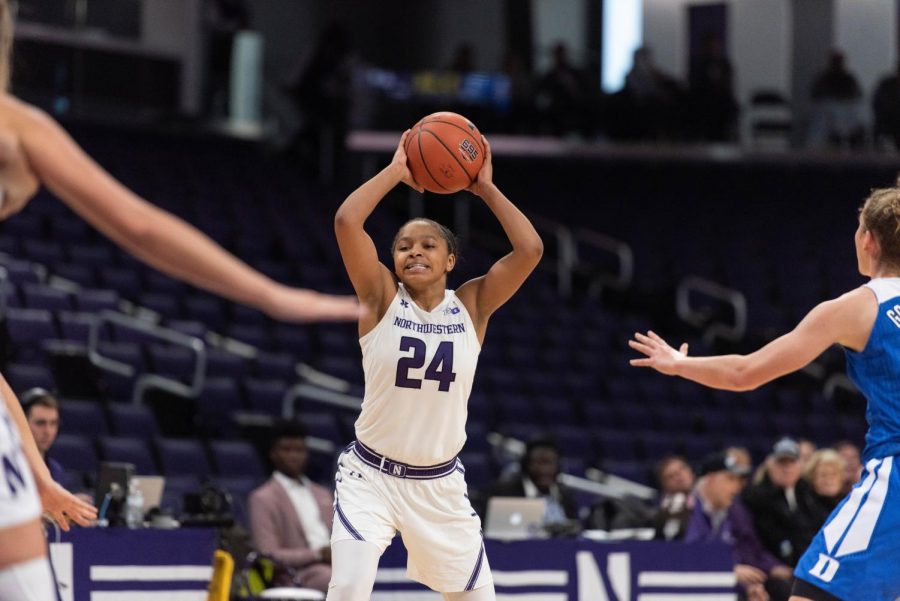 Jordan Hamilton looks to make a pass. The sophomore guard had 11 points before leaving the game with an injury.

For a moment in the third quarter of Northwestern’s nonconference matchup against No. 18 Marquette on Sunday, it seemed as though the Wildcats had put Wednesday’s defeat to No. 20 DePaul — one in which they’d scored a whopping 32 points in the first quarter before losing by 16 — and the first quarter of this one — in which they had scored only nine points — behind them. NU had tied the game at 34 at the 8:01 mark, and the Cats had a chance to take their first lead of the game.

But Marquette responded with back-to-back threes. Still coming off an injury suffered against the Blue Demons, senior forward Pallas Kunaiyi-Akpanah checked out of the game and made her way to the bench. Without Kunaiyi-Akpanah on the floor, the Cats’ momentum disappeared, and the Golden Eagles went on a 12-4 run.

NU (5-3) couldn’t get close to Marquette’s (7-2) lead again, and dropped its third game in a row with a 76-57 loss Sunday afternoon at Welsh-Ryan Arena. Sophomore guard Lindsey Pulliam finished with a team-high 15 points, despite shooting 5-for-19 from the floor, while Kunaiyi-Akpanah finished with 14 points and 15 rebounds.

“They’re a really good team,” coach Joe McKeown said. “There were a lot of runs in this game, and I feel like we struggled to score when we had to… Marquette makes you pay for mistakes.”

NU’s young and multiple-bigs lineup struggled to keep up with the Golden Eagles’ fast pace. Marquette outscored the Cats 48-20 in points in the paint and 21-6 off fast-breaks, and collected 13 points off NU’s 16 turnovers.

The Cats struggled to get going early on, shooting 4-for-16 from the field in the first quarter and failing to score on possessions that stretched deep into the shot clock. Marquette ended the quarter on a 14-0 run, and scored 20 of its 25 points in the first in the paint.

With the help of a switch to a zone defensively and a series of explosive plays from Pulliam and Kunaiyi-Akpanah, NU started to find its rhythm in the second quarter. Guards Natisha Hiedeman and Allazia Blockton — the Golden Eagles’ leading scorers who finished the game with a combined 38 points, 20 rebounds and nine assists — were held to just four total points in the period, and NU won the scoring battle 19-7.

The momentum the Cats rode into the break did not carry over into the second half, though. After NU tied the game in the third, Marquette scored 10 unanswered points and took a 57-47 lead into the final quarter. The Cats’ shooting woes — they shot a meager 8-for-29 in the second half — were especially evident in the fourth, as all but two of their ten fourth-quarter points came from the free throw line, and they couldn’t cut Marquette’s lead down below nine points.

“The biggest thing for us was (to) get back on defense and we addressed that, tried to limit them attacking the rim,” McKeown said. “They made some big threes too when things were really (tight), when we were in a position to keep within a bucket or two.”

The Cats battled injuries throughout once again; in addition to Kunaiyi-Akpanah, freshman guard Veronica Burton also returned for limited minutes after an injury, while sophomore guard Jordan Hamilton left the game hurt in the fourth quarter.

McKeown said the upcoming week-long break for finals gives the team a chance to recover and find its groove before finishing the nonconference season against Chicago State at home on Dec. 17 and then traveling to the Duel in the Desert tournament in Las Vegas on Dec. 19.

“We’ve got to clean up our wounds, have a great finals week and get ready to finish the nonconference and get into the Big Ten,” the coach said. “When we can practice and get everybody together at a high level, we’re capable of beating a lot of really good teams.”