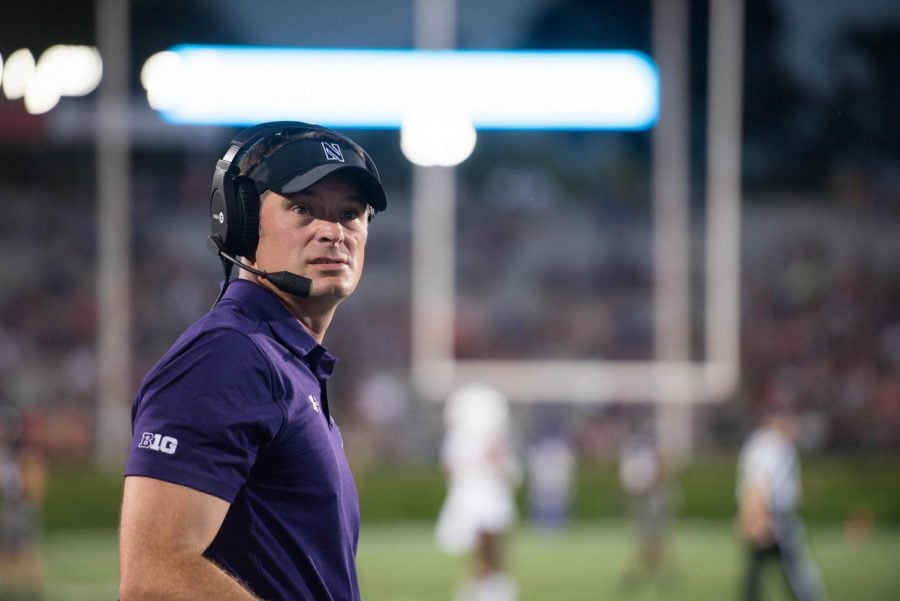 Adam Cushing looks towards the end zone. Cushing is leaving Northwestern to take the head coach job at Eastern Illinois.

According to a press release from Eastern Illinois, Cushing will be announced as the head coach of the Panthers at a press conference Monday in Charleston, Illinois.

“My years at Northwestern were incredible,” Cushing told the Tribune. “But this is an opportunity at a power FCS job, not a casual FCS job. There is a ton of football tradition, lots of Super Bowl rings and lots of potential.”

Cushing will remain with the Wildcats for the Holiday Bowl against Utah on Dec. 31, and will begin with the Panthers on Jan. 2, the Tribune report said.

The Illinois native and University of Chicago graduate has served as NU’s offensive line coach since 2009. He began his time with the Cats as a graduate assistant in 2004, and then coached tight ends and halfbacks from 2005 to 2007 and superbacks in 2008. Cushing also served as the program’s recruiting coordinator from 2008 to 2011.

Cushing is the second coach to head a Division I program after working as an assistant for Pat Fitzgerald at NU. Garrick McGee, who from 2004 to 2007 worked as a wide receivers coach and eventually the offensive coordinator, served as the head coach at UAB for two seasons.

“Adam has been a mainstay on our staff throughout my entire head coaching tenure across a variety of roles, and someone I rely on constantly,” Fitzgerald said in a statement. “He’s a terrific recruiter and a relentless teacher of the game. Over the last five years he coached an offensive line that blocked for the most productive running back and quarterback in Northwestern history. He’s ready for this opportunity, he’s earned it. We’re so excited for Adam, Jaime and their entire family!”