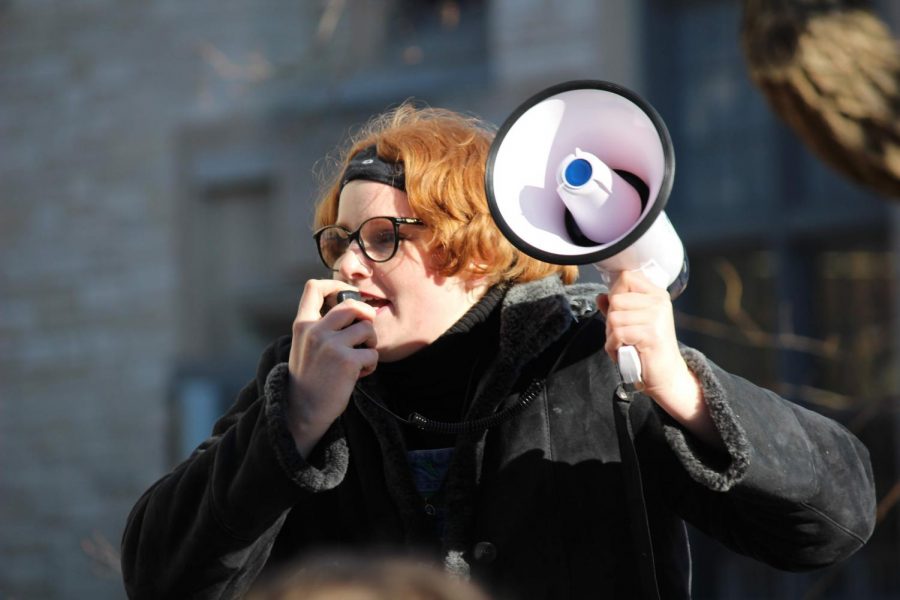 Communication junior Shane Eichstaedt shares their experience with bipolar disorder at the Rock. Many students spoke about their negative experiences with mental health at Northwestern at a rally in December.

The rally follows what protestors called a concerning years-long pattern of inaction and apathy from the University regarding students’ struggle with mental health and student suicides. Students said the school needs to focus on increasing diversity in its counseling staff, and that Northwestern’s preoccupation with its prestige comes at the sake of students’ well-being, drawing a comparison to an employer exploiting employees.

Around 60 students gathered at noon at the Rock to share personal stories before marching to the Rebecca Crown Center and listing demands directly to Telles-Irvin, who came outside around 1 p.m. after protestors demanded she come down from her office and address their concerns.

Telles-Irvin responded to the protesters and said she was “happy to accept” the list of demands put forth by the students. She assured the crowd that the mental health and well-being of students matter to the administration “very much so.”

“You and I, for the most part, probably agree on many issues,” she added. “It’s just a matter of figuring out how we respond.”

Telles-Irvin declined an interview request after the event Thursday evening.

The list of 10 demands includes a funding increase for Counseling and Psychological Services, the hire of additional counseling staff who hold salient marginalized identities and a decrease in the number of credits required to receive undergraduate degrees.

Less than a day before the rally, Telles-Irvin sent an email to the Northwestern community announcing the University’s plan to hire two new staff members to work at CAPS and University Health Services — these new staff members will focus on screening students at high risk for suicide and allow other staff to focus more on students in later stages of treatment. The email also mentioned the creation of a task force, scheduled to meet in January, to address improving mental health on campus.

But students viewed the announcement was a reaction to their circulation of flyers inviting people to the rally rather than a genuine attempt to improve students’ well-being. They also said the process to decide to hire two new staff members at CAPS was problematic because it happened behind closed doors and didn’t include students’ voices. In particular, students called for counselors who are people of color or hold an LGBTQ+ identity.

Some students also told the crowd that administrators had inadequately addressed their concerns about students’ mental health during private meetings. They said administrators downplayed the significance of the problem.

“The last time I spoke to you, you gas-lit our mental health concerns,” another student said, addressing Telles-Irvin. “You talked to us like we were stupid and we don’t know what’s going on.”

The students who organized the event told The Daily they wished to remain anonymous to avoid backlash from the University — last year administrators pursued conduct action against students for disrupting a talk by a visiting Immigration and Customs Enforcement representative.

Some students attending the rally said they were surprised at the event’s emotional rawness and impressed by the activism. Ben Schacht, a comparative literature doctoral student, said it was “moving” to hear students truthfully talk about their personal experiences during the open mic.

At times tearing up and choking, students spoke at length about their experience with child abuse, post-traumatic stress disorder, bipolar disorder — and about their frustrating experiences with CAPS. During their speeches they received snaps, claps and cheers as their words resonated with the audience.

“I’m tired of feeling like I can’t be here because of this thing that I have that makes me more creative, makes me more empathetic,” Communication junior Shane Eichstaedt said about their bipolar disorder. “I want to want to be here, and I shouldn’t have to take all of that on myself. Thank you for listening to this, I wish it could’ve been more poetic. But I am tired of trying to make my mental illness poetic.”

Protestors emphasized continuing to put pressure on the administration, saying true change would only be produced if students continued to voice their outrage.

“We’ve been organizing on this campus for four years and we’ve seen inaction like you could not believe,” one student said, addressing Telles-Irvin. “So please suffer our frustration and our disbelief when you tell us that you care. I have looked you in the eye across tables and you have gaslighted me. You have asked me what the scope of my problems are, as if it doesn’t matter that one person is suffering at this university. Every single person who suffers at this university motherf–king matters. We demand action. We will not stop until we see it.”