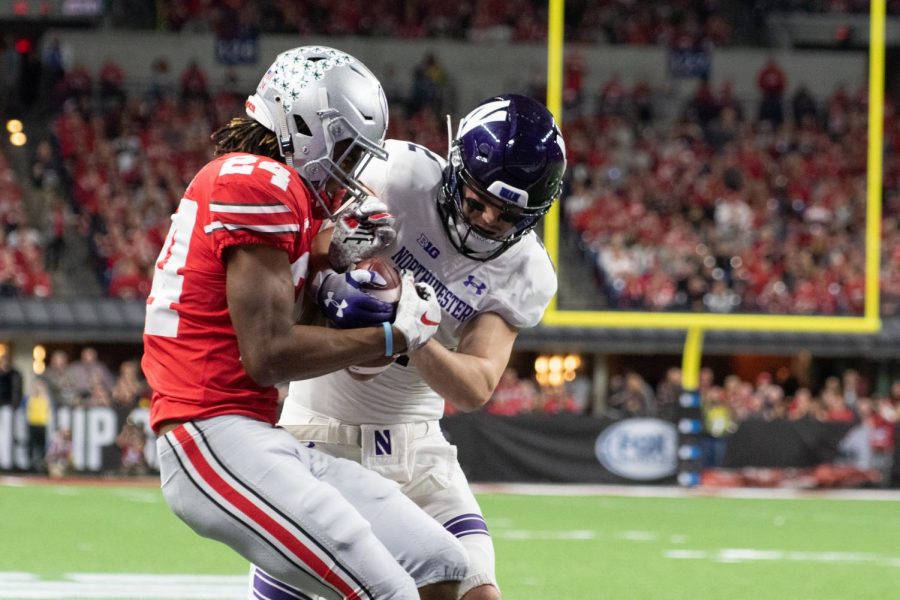 INDIANAPOLIS — Any path to a win for No. 21 Northwestern, which entered Lucas Oil Stadium as 16.5-point underdogs, involved the Wildcats winning the turnover battle.

Instead, they coughed the ball up three times and lost 45-24 to No. 6 Ohio State.

“Against a team like that you have to play clean. You can’t turn it over,” coach Pat Fitzgerald said. “Being minus-one in the turnover ratio against an outstanding football team makes it difficult to win.”

As Clayton Thorson dropped back to pass, the Cats rolled the pocket to the right — and away from game-wrecking defensive end Chase Young. But Thorson wasn’t out of the woods, as linebacker Malik Harrison blitzed, forcing the senior quarterback to release the ball before he got a chance to step into the throw.

Thorson lofted a pass down the right side of the field, intended for senior receiver Flynn Nagel. Nagel tried to make a play on the ball, but it was a much easier one for Ohio State safety Shaun Wade, who ripped the ball away from Nagel and derailed a key scoring opportunity for NU.

Fairly soon after, senior cornerback Montre Hartage secured an interception to get the Cats the ball back at their own 16, but a few plays later they faced third-and-10 from the 39.

Young, unsurprisingly, then made a statement. Dispatching senior tackle Blake Hance with a hand slap and then darting around him, Young gave Thorson almost no time to get rid of the ball. As the senior quarterback reached back to sling it, he was interrupted by a crushing hit from Ohio State’s star defensive end. The ball fluttered hopelessly forward and was quickly jumped on by Jordan Fuller at the Northwestern 46.

Replay review overturned the on-field incomplete ruling, and yet another potential game-tying drive for NU had ended with the ball in Buckeye hands. Ohio State subsequently extended its lead with a field goal.

“Their defensive line is pretty good,” Thorson said. “Chase Young and (Dre’Mont) Jones are big, solid guys. We knew that coming in, and it is what it is. I put my butt out there, and stuff happens.”

Young returned to wreak havoc again after halftime. The Cats had just secured a key defensive stop in the third quarter, getting the ball back down just 24-21 on their own 30-yard line.

On the second play of the ensuing drive, Young grabbed Thorson’s arm at the top of his dropback, causing his pass to come in low and deflect off a helmet at the line. The ball then ricocheted into the air, and Ohio State cornerback Damon Arnette rose to snag it.

The NU defense reclaimed the ball a few plays later on a fumble recovery, but the possession was nevertheless one of two in which the Cats had the ball with a chance to take the lead, and it ended on the second play with an interception.

“There’s not a whole lot a quarterback can do when he gets hit from behind and he’s just setting his feet,” Fitzgerald said. “We’ve got to look at did we help enough protection-wise, was the route too long. … Negative things are going to happen, you have to put the fire out.”