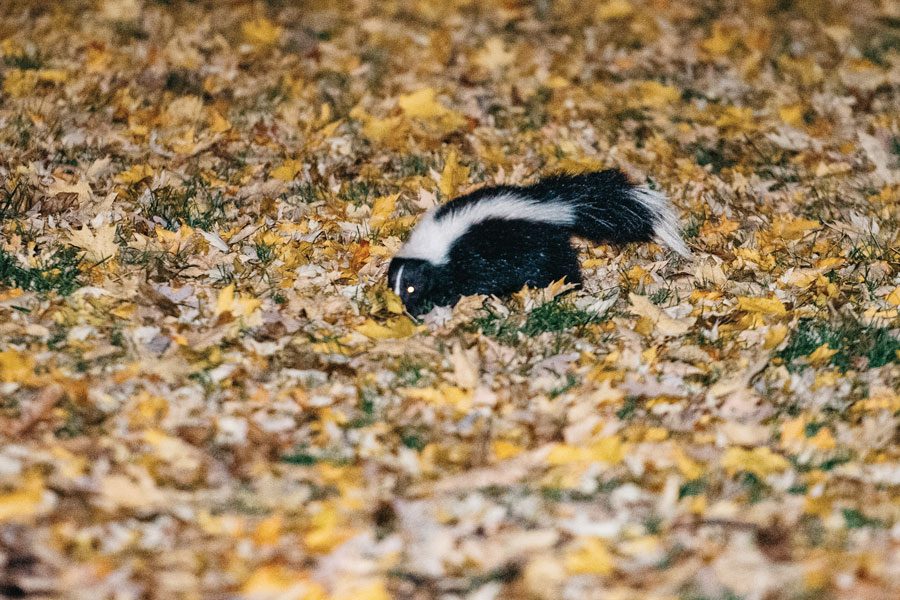 Two weeks into her college experience, Jennifer Zhan was walking back to her dorm. Then disaster struck.

Sitting right in the middle of the sidewalk was a skunk, its black and white tail raised to the sky in a defensive position. She started walking toward it, but as she approached, something strange happened.

“It started running at me, which I feel like is not what a skunk is supposed to do. I turned and I ran away,” the Medill freshman said. “I was chased out of my own home.”

Zhan’s story isn’t unique. There have been countless skunk sightings on campus in recent months, although there has not been a confirmed skunk attack.

In 2010, the number of skunks trapped in the Chicago area sat around 6,700, according to the Illinois Department of Natural Resources’ most recent statistics. Six years later? The figure grew to nearly 13,000.

Last year, Nathan Karnik saw two or three skunks during his eight months on campus. “All of a sudden, on my walks from south to north, I see them all cropped up around the fraternity quad — and I don’t like them. They scare me,” the Communication sophomore said.

“Skunks are horrible, the scourge of the earth,” he added.

Karnik said he’s seen skunks throughout open areas on campus. And other students have reported seeing groups — surfeits — of the nocturnal creatures throughout Northwestern: lounging on the Lakefill, biding their time by Bobb-McCulloch Hall, resting by The Rock and around the Allison Residential Community.

But they haven’t been limited to the Evanston campus.

Though Ald. Eleanor Revelle (7th) said she hasn’t received many complaints about skunks in her own ward, she’s heard of sightings in other parts of Evanston — and she’s even seen them around her own house.

“I’m pro-wildlife and I’m happy to coexist with them,” she said. “They stay out of our way and we stay out of their way. So I think people get overly concerned about skunks.”

During a Human Services Committee meeting in May, aldermen clashed on the issue of skunks in Evanston.

“I think the greatest number of complaints I’ve had are either under someone’s front porch or that someone’s dog decides to initiate an interaction with a skunk which has happened to my own dogs and it’s not very pleasant,” she said. “Frankly I’ve been really amazed at how polite some skunks can be when you’re directly interacting with them.”

Unlike many other pests, she emphasized, skunks largely do no harm. Throughout the Chicago metro area, however, residents have reported damaged yards and ravaged household foundations from skunks, according to the Chicago Tribune.

Though red foxes, wolves and badgers prey on the omnivores, skunks are seldom attacked presumably due to the possibility of being sprayed.

And some students, too, have taken extra steps to avoid being in caught in the mammals’ odorous mist.

Living on the corner of Sherman Avenue and Noyes Street, Celestine He was on her way home one night, walking through an alleyway. A skunk had been hiding around nearby trash cans — both she and it were startled.

“It looked like it was about to spray me, so I ran in the opposite direction as quickly as I could,” the Weinberg senior said. “I slipped on mud and fell.”

A year later, the “traumatic” incident still resonates, she said. If she spots a skunk now, He takes the long way around in avoidance. It’s even made her late to scheduled plans.

“I was walking down Foster — right where Foster and Orrington meet — there was this huge skunk. It was like two feet long (and) I’ve never seen such a long skunk,” she said recounting her walk over to a club event on campus. “I went back to Sherman and walked all the way down to University.”

Still, it’s “common to see increased skunk activity during the fall as they try to gain the extra weight they will need to survive the winter,” an Evanston Health and Human Services Department release said last fall.

The release included advice for Evanston residents in preventing skunk-related incidents including not feeding the mammals, keeping garbage cans indoors if possible and covering window wells.

But even the most deliberate precautions don’t always limit skunks’ impact.

Though Charlie Collar said he doesn’t usually see skunks on campus, he definitely smells them. One could often be found in the courtyard of his apartment complex last year. “It would frequently stink up my entire room if I left my window open,” the Weinberg and Bienen senior said.