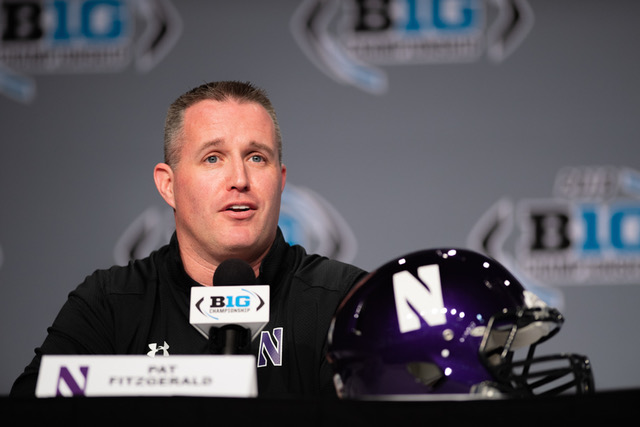 Pat Fitzgerald speaks to the media on Friday. His Wildcats will face Ohio State in the Big Ten title game Saturday.

INDIANAPOLIS — As Pat Fitzgerald stepped off the bus at Lucas Oil Stadium on Friday afternoon, it didn’t take long for him to realize that the spotlight here is brighter.

“When I walked in a few minutes ago here … saw the Big Ten folks getting ready to probably have their big meeting,” Fitzgerald said, “it dawned on me a little bit.”

When Fitzgerald next arrives at the 70,000-seat indoor behemoth in the heart of this city, he’ll lead the Wildcats into one of their most significant tests in years: Saturday’s Big Ten Championship Game against vaunted Ohio State, a national heavyweight and the No. 6 team in the country, with a berth to the Rose Bowl on the line.

Despite the stakes, unfamiliar setting and unusually late kickoff — 8:17 eastern time — Fitzgerald said his team wanted to keep preparations as close to a regular road game as possible. He spoke with his Leadership Council about several “thought-provoking” topics, from uniforms to the itinerary, but also the weekly attitude.

“They were the ones that were very clear that although the obvious outcome could be significant, the preparation has to be consistent,” Fitzgerald said. “How we go about our business, what we do and how we do things needs to be high and tight and ready to go earn a championship. They were great every day. I’m not surprised.”

Northwestern, nevertheless, faces a litany of tests against the Buckeyes. Quarterback Dwayne Haskins earned conference offensive player of the year honors, Ohio State is the defending Big Ten titleholders and Urban Meyer’s team has an outside shot at the College Football Playoff.

Haskins, in particular, will challenge a Cats’ secondary that has struggled at times this season and was depleted in recent weeks. Fitzgerald commented only tersely about the status of his defensive backs, calling them “great” and “awesome.”

Meyer, for his part, pointed to special teams as a likely flashpoint in Saturday’s contest. The Buckeyes excelled in that regard in last week’s 62-39 decimation of Michigan, allowing the East Division champions to score frequently on short fields.

“The matchup I see number one is the field position matchup, especially against this team,” Meyer said. “(It) never has penalties — very disciplined, very few fumbles.”

Challenges aside, Fitzgerald expressed optimism in his team. He pointed to bowl victories each of the past two seasons and NU’s 6-0 record against Big Ten West teams this season. He seemed characteristically unbothered by being the underdog, and sarcastically thanked the media for playing up that narrative this week.

Fitzgerald spoke at length about his two decades in Evanston, from playing for Gary Barnett in the 1990s to taking over the program 13 years ago. Now, more than a dozen years after taking the helm, Fitzgerald has his team on the cusp of a major breakthrough.

“(The division) was the next hurdle for our program to get over to become competitive and successfully competitive. We’ve been that way for a number of years, but to win the Big Ten West and get over that hurdle was the next goal,” he said. “Tomorrow night represents obviously the next goal in that process, and that’s winning the Big Ten Championship. Our guys have earned it. … I hope they’re excited.”