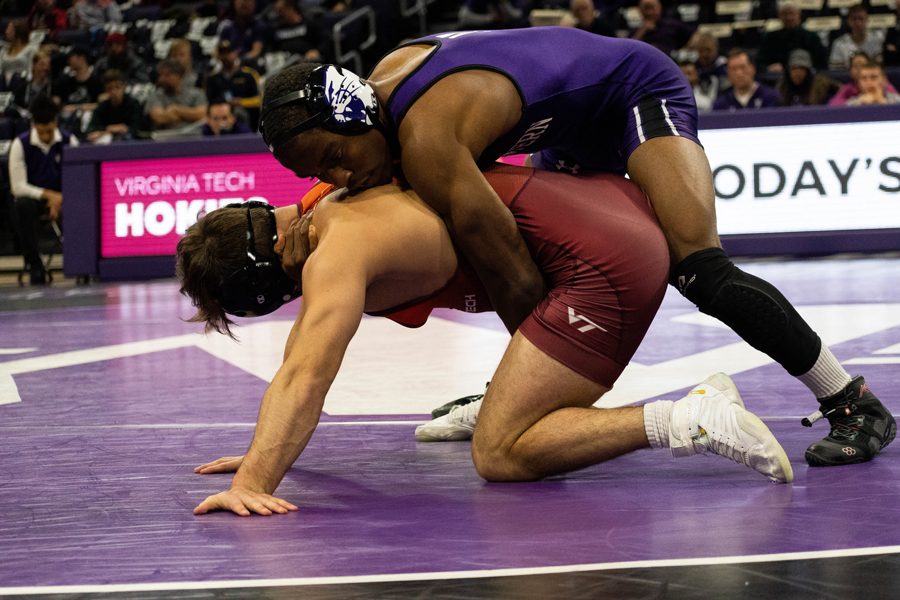 Yahya Thomas wrestles an opponent. The freshman has won his first two matches of the year.

After a shocking loss to unranked North Dakota State the week before, No. 23 Northwestern, (1-1, 0-0 Big Ten) tried something different in the lead up to its last game against then-No. 10 Virginia Tech. Upperclassmen led the team on an impromptu prayer circle, emphasizing unity and strength.

It worked. The Wildcats shocked Virginia Tech 20-16 for their first win of the young season. A 19-6 major decision from sophomore Sebastian Rivera put NU up 4-0 to start the dual and the Cats never looked back. The win was NU’s first against a top-10 opponent since the team beat No. 8 Illinois, 22-11, on Feb. 12, 2008.

Bolstered by the win at Welsh-Ryan Arena, the Cats head to Las Vegas this weekend to participate in the Cliff Keen Las Vegas Collegiate Invitational, their first tournament of the season.

Coach Matt Storniolo said he was disappointed in the team’s first result, but excited about the emphatic way they came back against the Hokies.

“To respond the way we did and get that win over a top-10 ranked team was a good step back in the right direction for our program,” Storniolo said.

This weekend’s tournament is different from the matches NU has seen so far because it involves multiple schools in one location. The team won’t be able to study their opponents as thoroughly as they would when prepping for a dual match.

They’ll also wrestle more, with multiple battles each day. Storniolo has pushed his team to rest frequently in advance of the tournament, something he said he wouldn’t do most weeks.

“As we get closer to competition, workout times decrease and it’s mostly about making sure the timing is right and legs are fresh,” Storniolo said. “You don’t prepare too much differently, you take it one match at a time. The only difference is that you’re gonna have more than one match in an evening.”

Senior Conan Jennings has started the season strong for the Cats, picking up two wins in the first two meets. Against Virginia Tech, he sealed the victory with 12-0 major decision.

“I prepare for every match the exact same whether it’s a dual or a tournament,” Jennings said. “I’m just gonna go out there and try my hardest until I can’t wrestle anymore.”

Jennings said the Wildcats can remain successful if each athlete can pressure his opponent for all seven minutes.

Redshirt freshman Yahya Thomas — who has also won his first two bouts of the year — said the win against Virginia Tech was a wake up call for NU about what it can do on the national level.

“It was awesome,” Thomas said. “It just really showed the kind of shift that we had made as a team. Our coaches were kind of like really worked with us, just making sure we were prepared mentally and physically for the Virginia Tech match.”

Thomas said NU has been working on the mental side of the game in practices, feeling as good about its game plan as possible before each match.

Storniolo said this weekend’s slate of matches will serve as an important indicator of where NU stands relative to other teams at this point in the season.

“When you have a chance to compete in tournaments like this one when the competition is at the highest level, it’s a great litmus test to see where we stack up against the best teams and players in the country this early in the season,” Storniolo said.