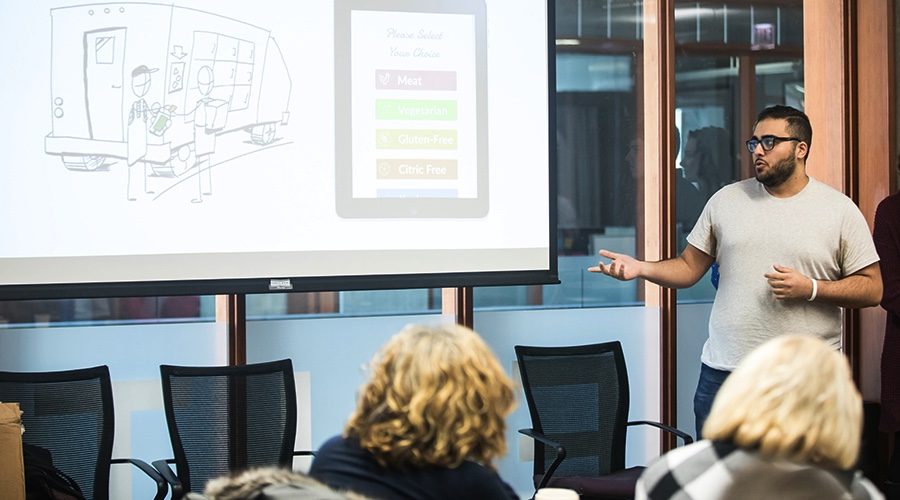 A student presents ideas to Feeding America representatives. NeighbourFood proved to be the most successful of the programs designed in the class.

Before he took Design 401-3: Service Design, Enes Umur, a McCormick graduate student working with the Segal Design Institute, didn’t really think much about food waste or food rescue. Through this class, he learned about an important issue he was unfamiliar with, and discovered how he could make a difference.

“This is one of the classes I’m super grateful for,” Umur said, “and this partnership is an amazing opportunity for students to immerse themselves in a really different shoe, and get into a really new field which I never knew about before, like the food industry, food waste… and try to leverage our education to create real impact in the world.”

The Service Design class is taught by McCormick Prof. Amy O’Keefe, who heads the Human-Centered Service Design Studio. The winter 2018 edition of the course — which teaches how design methods and operations for can be used by charitable organizations — partnered with Feeding America to look at ways to rescue food from retail to address food insecurity and cut down on waste. Students in the class were split into several groups, each of which designed their own method to address this problem.

Umur’s group outlined an idea for a system called NeighbourFood. The program connects people in food insecure areas to act as delivery people who pick up food about to be thrown out from pantries. Delivery people then bring the rescued food to people who do not have the ability to travel to pantries, such as the disabled, elderly, or low-income.

Chris Datsikas, Umur’s classmate, said the group spent a large amount of time working out how to make the service successful. The group visited food pantries and stores, he said, and spoke to workers there to determine the best way to solve the issue. They also worked in collaboration with the innovation team at Feeding America to see what the nonprofit needed.

The class, Datsikas said, and the experience was so fulfilling because it was focused on building up the empathy of students who took it, and fortifying their passion for an issue through a deep dive into it. What was particularly impactful, he added, were his group’s frequent visits to food pantries — where he met many who were stuck in desperate circumstances.

Datsikas said he believed Feeding America — the third-largest nonprofit in the country — also benefited from the partnership because, as young researchers, the students involved helped bring fresh approaches to the issues the nonprofit faces.
“At its core, our program focuses on human centered design,” Datsikas said. “And Feeding America partnered with us to provide a fresh perspective with a new and valuable mindset that they couldn’t have otherwise gotten internally.”

NeighbourFood proved to be the most successful of the programs designed in the class. O’Keefe said the program was one of 12 that received an award last month from the Design Management Institute, an international organization that connects designers to businesses.

O’Keefe added that NeighbourFood set itself apart from the other programs pitched in the class because it ultimately proved to be both the most economical and practical.

The program, she said, is helpful for her students; it allows them to understand how to apply the things they learn behind desks to tangible issues. By giving them the chance to work with longtime professionals, they can better prepare themselves for their future post-graduation.

“It’s really great,” O’Keefe said, “for the students to have the opportunity to engage in real world problems.”