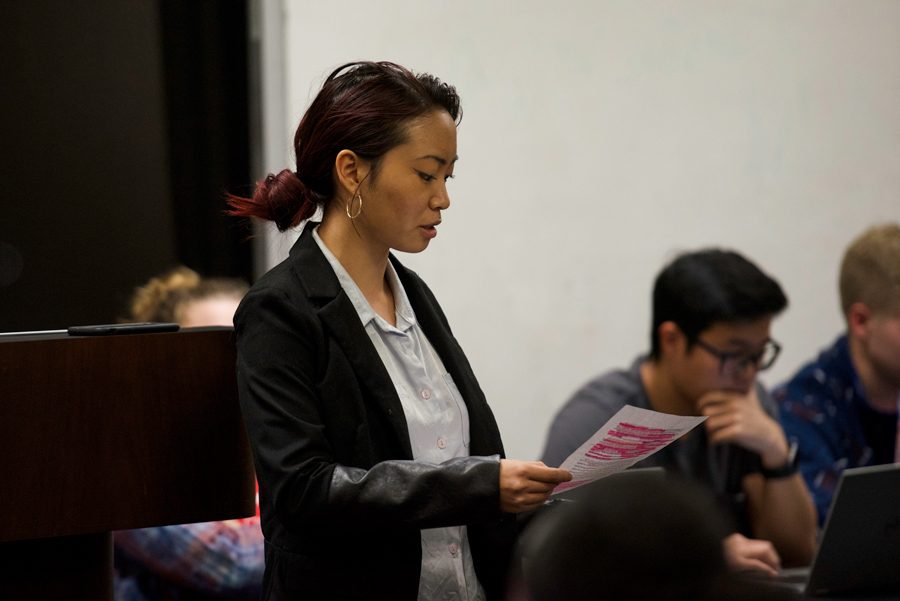 Mayfest and A&O Productions, two groups that take a large portion of ASG’s funding, requested additional supplemental funds at the meeting. ASG vice president for A-Status finances Isabel Dobbel said events are funded based on the cost and outcome of their most recent iterations. Following precedent, she explained, A-Status groups will receive a 3 percent increase from last year’s allocation in supplemental funding if the previous event was successful.

Allocations are made around week five of Spring Quarter, so Fall supplemental funding can be put toward events that occur after that deadline. The funding pool in the spring, made up of money from the student activity fee, was $1.5 million. Supplemental funding available in the fall is about $300,000, Dobbel said.

“Supplemental is a bit of a tease,” the SESP junior told the Daily. “It doesn’t actually mean extra money for something we already gave you. It’s for an entire event that we haven’t funded in our last cycle.”

A&O Productions and Mayfest — which account for about half of A-Status funding — requested supplemental funding on top of what the committee already recommended to them this fall. ASG denied both.

The supplemental funding process includes an initial “add round,” when a student group member can request to add money for a line item; a “cut round,” when anyone at the meeting can move to cut funding; and an additional “add round.”

A&O Productions received almost $300,000 in funds for the 2018-2019 school year, and the organization’s motion to request an additional $7,500 was denied. Some senators felt the money could be better allocated to multiple small-scale events rather than A&O Productions’ large-scale speaker events.

“What we were hoping for was a smaller allotment than we were requesting,” said Communication senior Marley Smith, who proposed additional funding for A&O. “That being said, seeing the way that the room functions, it’s not surprising that it didn’t happen.”

Mayfest’s request for additional funding was also denied. The organization received the second largest allocation from the committee at around $200,000. The student organization requested an additional $3,000 for safety reasons, both for stages and audience barricades during Dillo Day.

Citing similar reasons to the denial of A&O Productions’ request, senators felt that what might be a small amount of money for Mayfest would be substantial funding for smaller organizations and should be used elsewhere.

Dobbel also made an official announcement that students will be able to use Venmo to pay for events hosted by A-Status student groups beginning Winter Quarter. The pilot program — which she helped create in partnership with the Student Organization Finance Office — will expand to cover other events in the spring, Dobbel said.

Senators also announced efforts to make the ASG Code more comprehensive. A vote on the changes will take place at next Wednesday’s meeting.