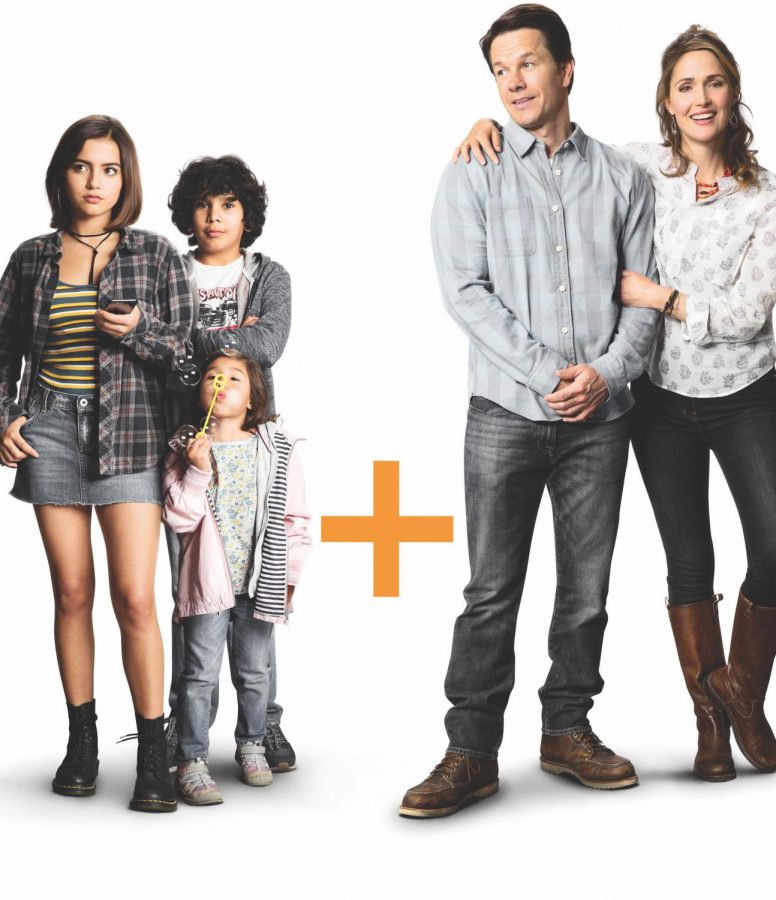 The cast of “Instant Family.”

There’s an iconic Norman Rockwell picture of Thanksgiving. Looking down a long white table, the matriarch and patriarch of the family set down a massive turkey, surrounded by the grinning faces of a stereotypical American family.

It’s a nice painting, but it’s far from the reality found at many tables around the country. The classic nuclear family is far from the given it was in Rockwell’s time. “Instant Family,” starring Mark Wahlberg, explores how the idea of what makes a family has changed, and emphasizes that, at the end of the day, love is more important than blood in bringing people together.

This film follows the young couple Pete and Ellie — portrayed by Wahlberg and Rose Byrne —who decide to adopt after feeling they missed their chance to have children of their own. After browsing through an adoption fair, Pete and Ellie find themselves in uncharted territory after going from being a couple to parents to a teenager and two young children.

The story is a familiar one for writer, director and producer of “Instant Family,” Sean Anders. Similarly to Pete and Ellie, Anders and his wife adopted three biological siblings from the foster care system several years ago after feeling like they missed out on having their own children.

“I said as a joke to my wife, ‘Why don’t we just adopt a five year old and then it’ll be like I got started five years ago,’” Anders said in production notes. “My wife said, ‘You know I would really consider that.’ And I said, ‘I was really just kidding.’ Yet, somehow a conversation sprang up out of that.”

Wahlberg — who previously worked with Anders on “Daddy’s Home” and its sequel — believes Anders’ personal connection to the content will enhance and develop the film’s emotional core.

“I think it gives it an emotional anchor, and just an honesty and authenticity that makes it profoundly emotional and personal,” Wahlberg said in production notes. “It’s something everyone can identify with.”

Anders said he never envisioned turning his life into a film — mainly because he said he didn’t have that interesting a life before the adoption. But Anders’ writing partner John Morris suggested the idea for the movie after watching Anders’ family change and develop over the years.

Morris saw screen potential for Anders’ story because he didn’t know much about the adoption process, and neither did Anders before he went through it. Anders was originally apprehensive about making a comedy about the foster care system, but Morris pointed out that many of Anders’ experiences with the emotionally trying process were light-hearted and funny.

The movie’s tone stays true to the realities of the foster care system: for every difficult day and heartbreaking moment, there are also surprising moments of joy and hilarity in figuring out the new normal. Anders said he had to carefully toe the line between audience stereotypes of the foster system and reality. He said many movies are either sugar-coated or trauma-focused, and Anders wanted to tell a more complete story by not shying away from the difficult moments, but also allowing the audience to laugh and feel the joy of creating a family.

The entire creative team was determined to make the movie as authentic as possible. Anders met with adoptive parents, children who went through the foster care system and social workers to hear perspectives and stories beyond his own.

Anders described the process of creating an accurate representation of foster care families onscreen as daunting because every adoption story is different. While the film is inspired by his personal experiences, he weaved in stories and insight from others who shared their own experiences with the system. Navigating through these different perspectives was often difficult to juggle, Anders said.

“One of the hardest parts was trying to narrow (the different experiences) down to one cohesive story because everybody’s story was almost movie-worthy by itself.” Anders said. “I wanted to touch on a lot of different areas that are the more common areas people deal with in this.”

One specific area Anders touched on was the difficulties that come with adopting a young adult. Anders said he wanted to include a teenager in the film, because he felt they are the most misunderstood group in the foster care system.

To understand this experience, he sat down with the adoptive parents of teenage girls and the young women themselves. Through these meetings he met Maraide Green, who later became a consultant for the movie and served as inspiration for the movie’s 15-year-old Lizzy.

Green reminded Anders of the character they had in mind, because she was smart, poised and open to talking about her experiences. Anders began sending her drafts of the script and she would send back feedback. Once the movie was set to begin production, Anders called Green and told her they wanted to bring her on set to Atlanta, Georgia.

“I had no idea any of this would ever happen,” Green said. “I thought I would just end up giving him notes and then maybe see it one day, but Sean brought me along for the whole process and it’s been really rewarding.”

Green said the film is important to her because it depicts some of the toughest times in her childhood. She said the movie can act as a resource for those in similar situations.

Anders knew “Instant Family” had come together how he envisioned during its first audience screening. The seats were filled with social workers, adoptive parents and people who were once in the foster care system. Anders said he could tell viewers came in skeptical, but began to warm up to the film over its course.

In the end, the film received a standing ovation.

“It was one of the best moments of, I was going to say my career, but really one of the best moments of my life, because it went from being so terrifying to so gratifying,” Anders said. “A lot of families have thanked us for the authenticity of the movie, because they feel they’ve had such a hard time explaining to people they know how this works, and now they feel like they have this movie that demonstrates it for them.”

Read more from November’s edition of The Monthly here.