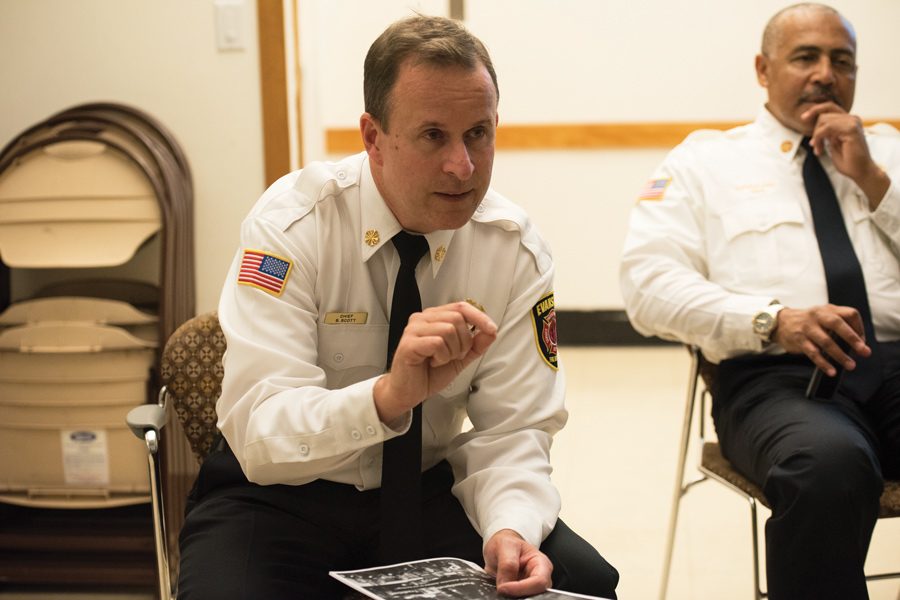 Evanston Fire Chief Brian Scott at a meeting. Following the city’s approval of its 2019 operating budget, EFD Station 4 will remain open in Evanston.

Fire Station 4 will remain open following the approval of the city’s 2019 operating budget, ensuring service levels and response times will be maintained at the current standard.

Aldermen voted 6-3 to approve the city’s 2019 operating budget at a Nov. 19 City Council meeting, granting the city more than $319 million for the next year. The budget, which seeks to fill a projected $7.4 million deficit, was released at the beginning of October and includes a number of expense reductions and revenue increases.

“The council should be given a ton of credit for having to balance a number of important priorities for the community with some very very stringent fiscal restraints,” Scott said. “Overall, the budget process was the best you can do under very difficult circumstances.”

The closure of the station was included in the city’s first draft of its budget which estimated a $1.2 million cut to EFD. The cut would have eliminated nine staff positions, the proposed station closure and the resulting elimination of its fire engine. Station 4 — located at 1817 Washington St. — is in the 2nd Ward and services the southwest region of Evanston.

Now, the department will hold some position vacancies open and cut parts of its community engagement programming for the next fiscal year. Scott said EFD will continue to work with aldermen to ensure it operates “as efficient as possible while maintaining critical service levels to the community.”

Scott told The Daily in October that if the station were to close, he feared the result would be a “cascade effect” throughout the city.

“I would always caution the Council in looking at the fire department as a production-type model,” Scott said at a November City Council meeting. “What we need to look at is its resiliency. … Certainly, the number of fires we go to isn’t a lot compared to the overall calls we respond to, but when those fires occur, we need the requisite amount of people.”

Scott said that if Station 4 were to close, the response times in the area currently served would generally have increased by around 50 percent if all on-duty firefighters in the area are available and in station. The current response time in Evanston is on average three minutes and 15 seconds, well below the national average of four minutes.

The closure, Scott said, would have added roughly one to two minutes of response time to calls.

During a Nov. 5 council meeting, aldermen overwhelmingly opposed the possible station closure, referring to the increased response times and also pointing out the fact that many residents rely on firefighters — who in Evanston are cross-trained as paramedics and whose vehicles are supplied with medical equipment — for medical care.

Ald. Judy Fiske (1st) said during the meeting that she knows the city has to “find a way to deal with the budget but it shouldn’t be on the backs of police and fire.”

Mayor Steve Hagerty said at the the Nov. 19 meeting that the budget is “not perfect.”

“There is sacrifice that has been made across the board in terms of programs, as well as for taxpayers, but it’s good work that’s been done,” he said.