With the ribbon cut, Sheridan/Chicago bike lane project is complete 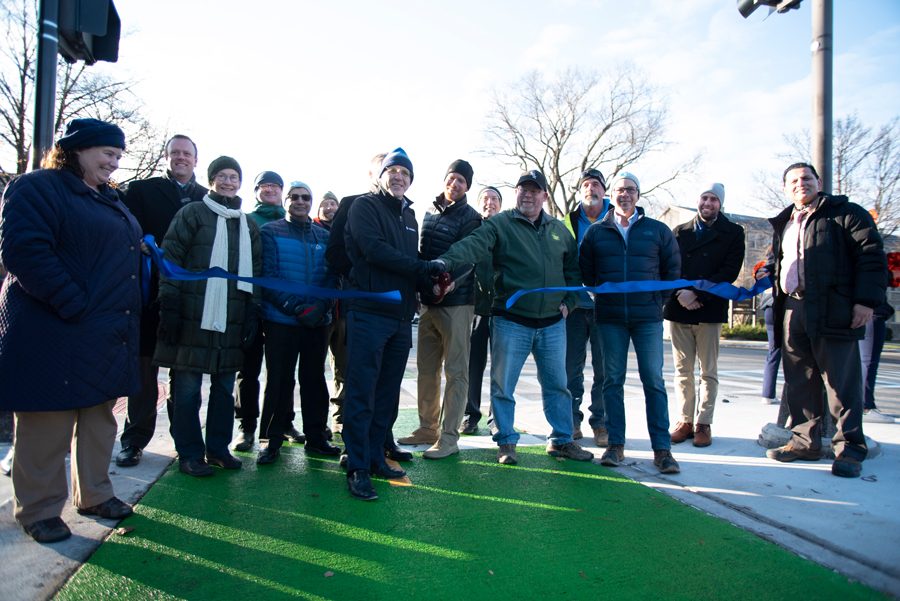 Evanston Mayor Steve Hagerty cuts a ribbon held across the bike lane at Sheridan Road and Lincoln Street. The ribbon-cutting ceremony featured Northwestern and Evanston officials as they commemorated the completion of the Chicago Avenue/Sheridan Road improvement project.

On a blustery and brisk Tuesday morning, city and University officials gathered with Evanston residents to celebrate the completion of the final phase of the Chicago Avenue/Sheridan Road improvement project.

The project, which had been in the works for many years, began construction in March 2017. Its purpose: improving and adding a bikelane to a nearly two-mile stretch from Chicago Avenue and Grove Street to Sheridan Road and Isabella Street/Ridge Avenue.

The push for bike lanes on Sheridan Road gained renewed attention after the 2016 death of Chuyuan Qiu, a Weinberg freshman who was turning onto the road on her bicycle when she was struck and killed by a cement truck. Work on the project had been planned for a number of years, but Illinois’ lack of budget through 2017 set back the construction several times and temporarily halted it, causing delays.

The project included a variety of street improvements, like a protected bike lane, a new water main, landscaping, and more, per an Evanston news release.

The sun was gleaming through the crisp air as Mayor Steve Hagerty and city officials spoke to commemorate the completion of the project, citing its benefits not only for Evanston and residents but for the city’s infrastructure.

Hagerty said the final project follows the “complete street approach,” which focuses on pedestrians, bicyclists and public transportation, “as well as the people still driving cars these days.”

Along the east side of Sheridan Road and Chicago Avenue where the construction took place, is the protected bike lane, with its vibrant green paint job and a cement barrier.

The bike lane runs through the Northwestern University campus, providing a space for safe transportation for students on their bicycles.

“This project is another example of the strength of the University’s partnership with the City of Evanston,” University spokesman Jon Yates said in an email. “We worked closely with city and state officials to increase pedestrian safety and improve traffic flow in the surrounding community.”

Lara Biggs, Evanston’s engineering and capital planning bureau chief, described the project as “once in a lifetime,” stating that the collaboration between the community and University was successful.

Evanston resident Jeff Balch, who attended the ribbon cutting, said he sees the project as “part of the process of graduating from the reliance on motor vehicle(s).” Balch said he uses the bike lane frequently and works in downtown Evanston.

The ceremony was quick and cheerful, despite the chilly conditions.

“My toes are cold and my heart is warm,” Balch said.