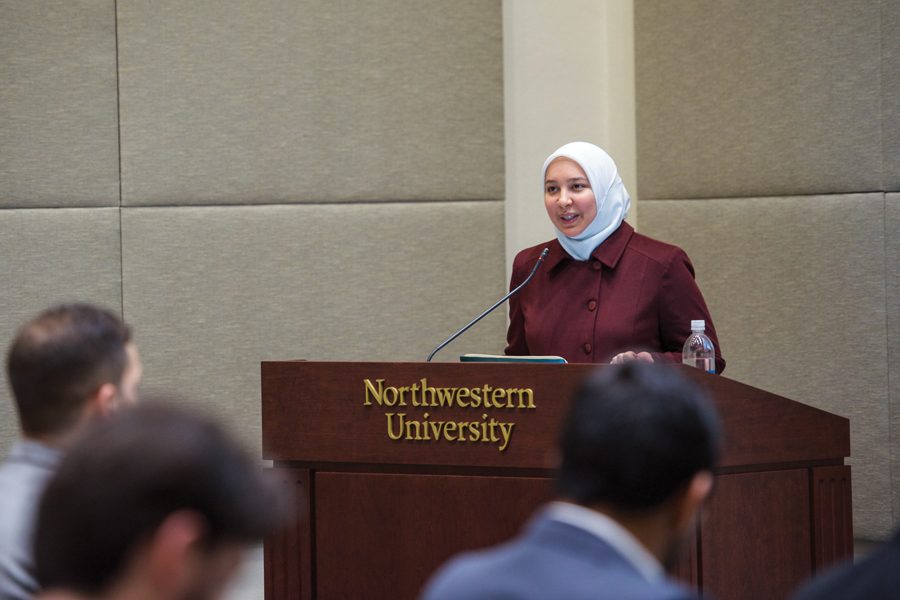 Dr. Rania Awaad gives a talk Friday at Hardin Hall. Awaad is a clinical psychiatrist at Stanford University, and during the event addressed issues of mental health in the Muslim community.

While in college, now-psychiatrist Dr. Rania Awaad didn’t take a single psychology course. At the time, she thought of psychology as a “Western construct.”

“What good Muslim takes psychology?” she asked. “That’s a bunch of nonsense.”

It wasn’t until Awaad was a practicing spiritual counselor that she realized something her freshman-in-college self would not have believed: Islam can’t fix everything.

Awaad, a clinical psychologist at Stanford University, spoke to a crowd of around 75 in Hardin Hall for the Muslim Cultural Students Association fall speaker event, Inside Muslim Minds.

During the event, Awaad addressed issues of mental health in the Muslim community, like the problem of many Muslims not seeking treatment for mental illness. Both internal and external factors drive this reluctance to seek help from a counselor or psychiatrist, and the biggest deterrent is a fear of judgement, Awaad said.

But that jugement can come from more than one angle. On one hand, Awaad said many Muslims don’t feel comfortable disclosing mental illnesses to their other Muslim friends, who may not consider mental health issues real problems.

Awaad described an incident where she heard a woman speak about judgement she got for disclosing her depression — when she told her friends how she felt, they told her simply to pray more.

“It’s not because of laziness,” Awaad said. “She would say, ‘Look, I am barely brushing my own teeth and combing my own hair. If I’m not taking care of my daily basic functions of living, how is it that I’m supposed to do extra prayers?’”

The other worry Awaad said Muslims may have is that non-Muslim counselors won’t be culturally competent enough to integrate Islam into traditional therapy. But this, Awaad says, is where history comes in.

One of Awaad’s best received research papers, she said, was about a translation she made of a document from the 9th century in which a Muslim doctor almost perfectly described the symptoms of Obsessive Compulsive Disorder.

In addition, she said, the first psychiatric hospital was built in what is now Baghdad, also in the 9th century. What Awaad learned from doing her research contradicted what she thought as a college student — that psychology was Western in origin.

“I want you to know your own heritage,” she told the audience. “So that when you start this discussion with your folks and your friends and your family members, you know where you’re coming from.”

Starting that discussion, Awaad added, is extremely important, especially for college students. She told the audience to be aware and “not ostriches sticking our heads in the sand.”

“Subjects like this are really important to gain knowledge on,” she said, adding that she thinks it’s necessary to learn about a new perspective and make changes based on new information.

Awaad ended her talk with a reminder that the Muslim community is not immune to mental health concerns, and urged the audience to look out for friends and family members who might be struggling.

“We have to actually talk about these things in much more detail and acknowledge them for what they are,” she said. “What we have going on is what everyone else is susceptible to, and that’s where the conversation has to start.”