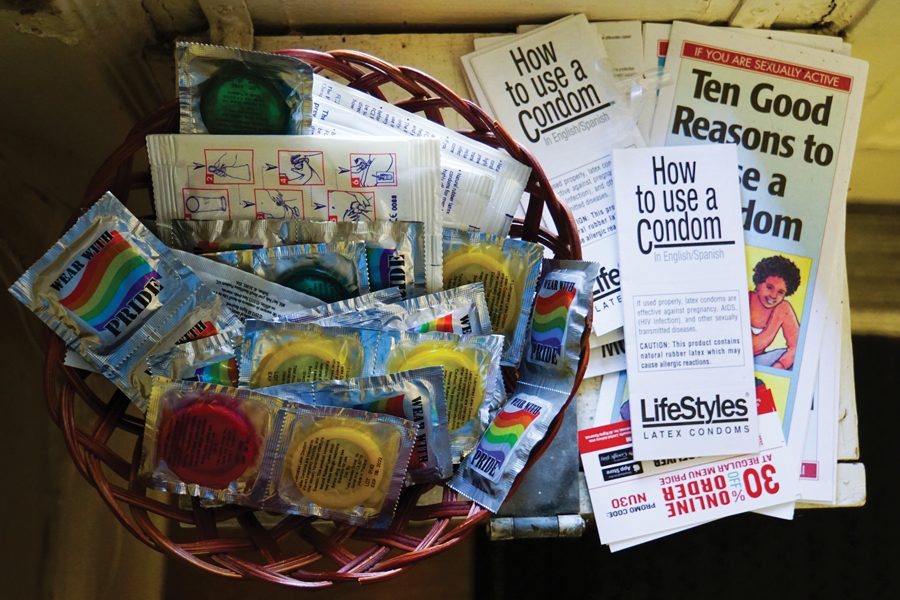 Condoms in a basket. CARE provides free condoms as well as plans content for The Student Body, a True Northwestern Dialogue about sex and consent.

Rates of sexually transmitted diseases have risen for the fourth consecutive year to a record high, according to the Centers for Disease Control and Prevention. But Northwestern hasn’t changed its approach to addressing it students’ sexual health in response to the news.

Nearly 2.3 million cases of chlamydia, gonorrhea and syphilis were diagnosed in 2017, an increase of more than 200,000 cases from the year before. Young people are especially at risk, since they make up about half of new cases, and most of them don’t get tested.

“Certainly young people are the individuals in our nation who are at greatest risk for sexually transmitted infections,” Edward Hook, the scientific committee chair of the National STD Prevention Conference, said in a press briefing earlier this year.

Many students come to college without having learned about safe sex and STD prevention in high school, and while some are turning toward colleges to ensure their students are properly educated, Northwestern hasn’t made any changes to orientation programming in response.

Madison Fiedler, who attended an all girls middle school in her hometown of Asheville, NC, says her high school sex education was inadequate.

“Our sex education comprised our math teacher bringing in some organic vegetables from her garden and putting some condoms on them, and asking if we had any questions,” the Communication senior said. “We didn’t know what to ask questions about.”

Adequate sexual health education — or any sex education — isn’t a given. According to the National Conference of State Legislatures, 24 states in the U.S. require sex education be taught, and only 21 of those states are mandated to also cover HIV and other STDs.

Northwestern students come from around the globe, so sex education, especially including a discussion of STD prevention, isn’t a universal experience. Many students come to school without having sex, and may have trouble learning safe sex on their own.

“When I came to Northwestern there was a huge learning curve for me,” Fiedler said.

“CARE can provide programming on sexual health such as learning the basics on contraception, STIs and safer sex,” said CARE assistant director Carrie Wachter. “Essentially all that one should have learned in high school but often does not.”

CARE also helps plan content for The Student Body, a True Northwestern Dialogue about sex and consent presented to students during orientation.

But the TND does not include detailed information about sexual health and STDs. Just sex and consent are “difficult to teach in 45 minutes,” Wachter said. “We try to be conscious about what aspects of consent are going to make the most sense and feel the most relevant to talk about during such a short time frame.”

In light of the new figures, Wachter said, there’s a chance more content could be added in the future.

Patricia Hilkert, the director of New Student and Family Programs, which plans orientation, said her office and CARE would need to work together to change the content.

“If there are rising rates of STDs we will have to look into this issue more and see how it can be incorporated into the TND,” Hilkert said. “Currently, the focus of the TND is more about healthy sexuality and consent so there would definitely have to be some additions to the script and discussion guide.”

And Fielder said adding content about safe sex and STD prevention “wouldn’t be disruptive” to the existing content of the TND.

“When you’re talking about safe sex, consent is already a part of that definition, or it should be,” Fiedler sad. “And so should pregnancy and STD prevention and also basic resources.”

She added that, though including that level of basic sex ed may seem pedantic, it’s “one of those things that can’t be talked about too many times.”

CARE isn’t the only resource available to students when it comes to learning about safe sex and STD prevention. Sexual Health and Assault Peer Educators is a student-run, CARE-affiliated group that facilitates campus discussions about sexual health and assault.

Communication sophomore Amy Prochaska, who is on SHAPE’s executive board, said SHAPE tries to combat the rising infection rates by educating students.

“We do this mostly through our presentations which clarify and specify what the infections are, how to get tested, preventative measures, and possible treatments,” Prochaska said.

In addition to already existing programming — including the G-Spot, a weekly installation in Norris University Center — Prochaska said she’s trying to work with the University to provide a free day of STD testing sometime in the near future.

Occasionally, Northwestern does provide a day of free testing, like when Multicultural Students Association and Asian Human Services of Chicago partnered for confidential HIV testing in February.

Fiedler said the by-request availability of CARE and SHAPE programming is a problem, and the University doesn’t do a good job publicizing the “resources it actually offers,” Fiedler said.

What the school offers in terms of sexual health services and education isn’t necessarily clear, she added. If she were to be diagnosed with an STD, she wouldn’t know where to go.

“Be realistic about the limitations, but be transparent about where you go when you want to do what,” she said. “It has to be easy for people to know what to do. It’s always easier to do nothing than to do something.”