Key jangling has been a tradition at football games for years. Some say it is elitist 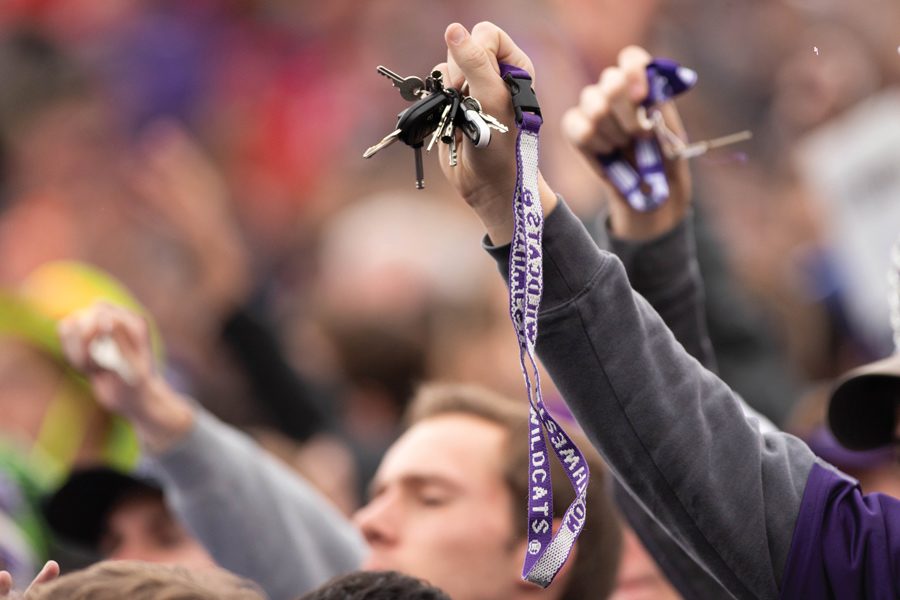 Northwestern students jingle keys before a kickoff. The taunt has some elitist undertones, but it’s been part of the school’s tradition for years.

When Weinberg sophomore Vicente Rudolph went to his first football game during Wildcat Welcome, he watched as fans jingled their keys at kickoff. He figured it was a form of distraction, to try and throw the opposition off their game.

Rudolph said he later found out the tradition implies that Northwestern is so academically superior that even if the Wildcats lose, it’s OK — students at the competing university would “valet our cars” in the future.

“It is unsportsmanlike and it’s not in the spirit of the game because it takes a step back from football and makes it like ‘we are better than you’ in other aspects,” Rudolph said.

Northwestern has not heavily promoted the jingling the keys since the 2011 Wildside 101: Northwestern Football traditions video. Rudolph said he thinks students continue to do it because of tradition and groupthink.

McCormick freshman Alexandre Kaiser also heard the jingling at his first game, but thought it was inoffensive and funny, he said.

“If you look at all the other schools, they are chanting that we are nerds and we’re chanting that they’re going to work for us one day,” Kaiser said. “There is a cycle where you are just trying to get under the skin of the other team…It is kind of just mutual at this point.”

Weinberg freshman Grace Hauser said that although poor sportsmanship is present among many universities, the jingling makes Northwestern look unprofessional.

“I do think that when you (don’t consider) the intended audience it is an elitist thing,” Hauser said “That’s what makes me feel a bit uncomfortable.”

Northwestern football has had a reputation of losing, and has only recently become a winning program. Hauser said she felt like the tradition had been around for a long time and was created because students resort to celebrating academic success if they fail athletically.

Maddy Fisher, former vice president of Wildside, said she was curious about the origin of the tradition and corresponded with University archives. The earliest reference to shaking keys she found was in 1984 in The Daily Northwestern, which refers to it as an established tradition.

Fisher said a theory she learned from University archives is that the tradition started around the time of the team’s losing streak between 1979-1982. However, she does not participate in the tradition and hopes students understand the meaning behind it.

“I think students should take it upon themselves to recognize that it has very serious and consequential undertones,” Fisher said. “I don’t know that realistically seeking out some sort of implementation of an order (to stop) from the University or Athletics is necessarily realistic. But I think it is something that the University should strive towards making sure everyone understands clearly what it means and acknowledging that isn’t a way we would want to reflect ourselves.”

This story has been updated to clarify that Maddy Fisher was commenting on a theory she learned from the University Archives.