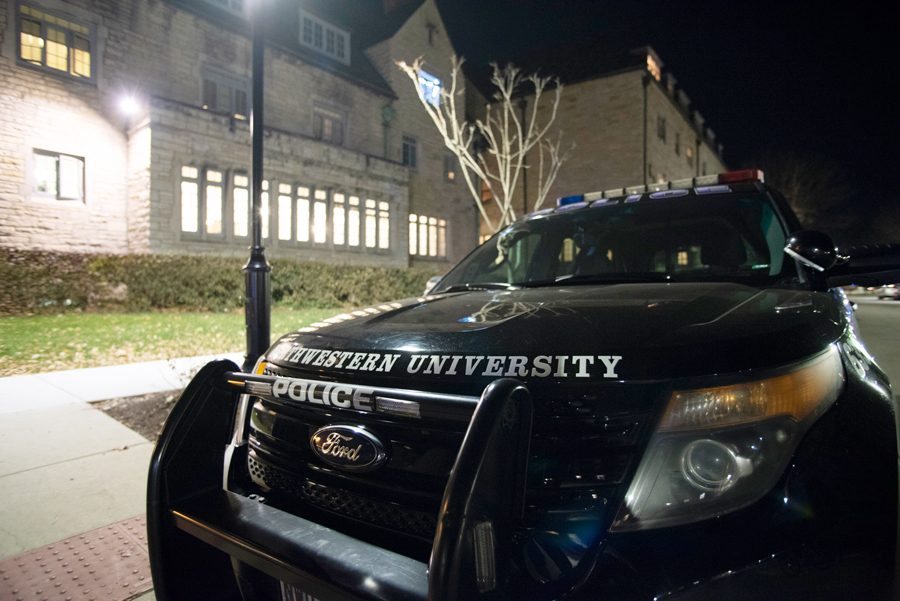 University Police car parked in the Sorority Quad Tuesday night. University Police has been responding to recent incidents by increasing patrol on and around Northwestern’s Evanston campus.

Northwestern students have been put on edge by a number of incidents involving men grabbing women by the tops of their backpacks or arms or following them down the street.

Communication freshman Samantha Tapper said before the reports, she didn’t think these types of incidents could occur at Northwestern. Now, she said, she’s anxious.

“I just felt a lot of anxiety, especially for the future,” Tapper said. “Campus is very dark, especially on the path by the lakefill, and walking through the trees can be scary if you don’t really know who’s around or who’s watching you.”

Students have also criticized the timing of UP’s alerts, which can sometimes take hours after the incident to reach the public.

Tapper said she feels incidents weren’t addressed quickly enough, and that she heard about them from social media and other students several hours before the University said anything.

Weinberg sophomore Gabriella Boone thinks UP should report incidents faster, so that students are aware as soon as possible, even if that means giving incomplete information.

“I get that they’re wanting to make sure that what they’re reporting is accurate, but I feel like they should let us know in some capacity what is happening as soon as they can,” she said. “Even if it’s not an official report.”

For things like assault, homicide or armed robbery, he said, information will be pushed out quickly, “at the risk of some degree of inaccuracy.”

These incidents, he added, aren’t considered dangerous enough for a rushed, potentially inaccurate report. From the initial report by the victim to the eventual crime alert email, the process can take around an hour, Lewis said.

Associated Student Government President Sky Patterson suggested the creation of an online platform for students to report incidents would help “expedite the transfer of information” between students and the administration. ASG on Wednesday passed emergency legislation calling for Northwestern to make more efforts to protect students.

“There should be efforts to make sure students know that stuff like this is happening,” she said. “Just so that we as students can be aware of situations like this and adjust accordingly.”