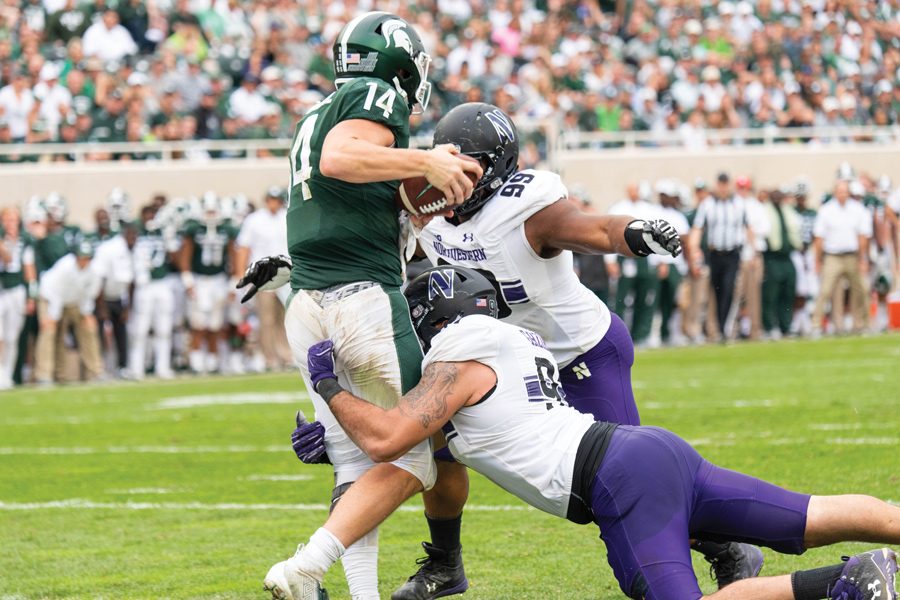 Joe Gaziano and Jordan Thompson bring down Michigan State quarterback Brian Lewerke. The duo has led the Wildcats defensive line throughout the season.

Even during Northwestern’s season-changing four-game win streak, the Wildcats were inconsistent. Whether in pass offense (senior Clayton Thorson’s two games with less than 200 passing yards), rush offense (back-to-back under 35-yard performances) or pass defense (allowing more than 300 yards passing to struggling quarterback Brian Lewerke), NU has been missing something each week.

Except quality defensive line play, which has been there all along, powering the Cats’ resurgence.

Against Michigan State, the group was crucial in two first half red zone stands that led to field goals and another goal line stand to ice the game late in the fourth quarter. Against Nebraska, sophomore Earnest Brown’s scoop-and-score fumble return touchdown changed the complexion of the first half, and classmate Sam Miller led the team with 14 tackles. Against Rutgers, NU allowed 188 total yards.

And against Wisconsin, the Cats held superstar running back Jonathan Taylor to his worst game of the season: Forty-six yards and two fumbles. At one point, he was benched.

That’s how good the NU defensive line has been. It got a preseason Heisman Trophy candidate benched.

“I always want them to play better, but it’s a good group to coach,” defensive line coach Marty Long said. “We’re rotating eight or nine guys, so that’s good. Some teams, they only play six, and some barely take their starters out. We’ll roll guys, which is good.”

Junior Joe Gaziano is the star of the group, with his team-leading 8.5 tackles for loss and 4.5 sacks. He’s joined on almost every down by senior defensive tackle Jordan Thompson — third on the team with four tackles for loss — and a deep rotation of veterans making important contributions.

Sophomores Brown and Miller have been consistent contributors, including their game-breaking performances against Nebraska. Senior Fred Wyatt is tied for fourth on the team with 3.5 tackles for loss. Juniors Alex Miller and Trent Goens have each provided steady contributions while rotating into games. This depth helps the line keep opponents on their toes.

“When we change up our pressures, it keeps the offensive line guessing and they can’t key in on one guy particularly player, and it allows other guys to free up,” Gaziano said last month. “We’re trying to change up our looks and not give the same pressure.”

The line’s contributions can also be seen in the impressive tackling numbers the Cats’ linebackers have produced this season. NU’s defensive scheme relies on its linemen to eat up blocks, freeing the linebackers to operate in space and make plays.

Sophomores Blake Gallagher and Paddy Fisher lead the team with 86 and 69 tackles, respectively. Senior Nate Hall and sophomore Chris Bergin have split time at the strong-side linebacker spot due to Hall’s injuries, and their 73 combined tackles would rank second on the team.

They’ll need that space to operate against an efficient Iowa passing game Saturday. The usually run-focused Hawkeyes rank 119th in Rushing S&P+ yet 38th in Passing S&P+ behind the arm of experienced signal-caller Nate Stanley.

Iowa’s play-action passing game will challenge NU’s linebackers, but it should also provide time for the Cats’ defensive line to put pressure on the quarterback, something they’ve struggled to do at points this year.

“We play gap sound defense on the defensive line, we’re always trying to cancel gaps and get a good push, and that doesn’t always translate into a good pass rush,” Gaziano said this week. “But we can capitalize on third downs. When we know, if it’s a third and long situation, they have to pass, that’s when we have to capitalize and be able to land on the quarterback and affect his throws.”