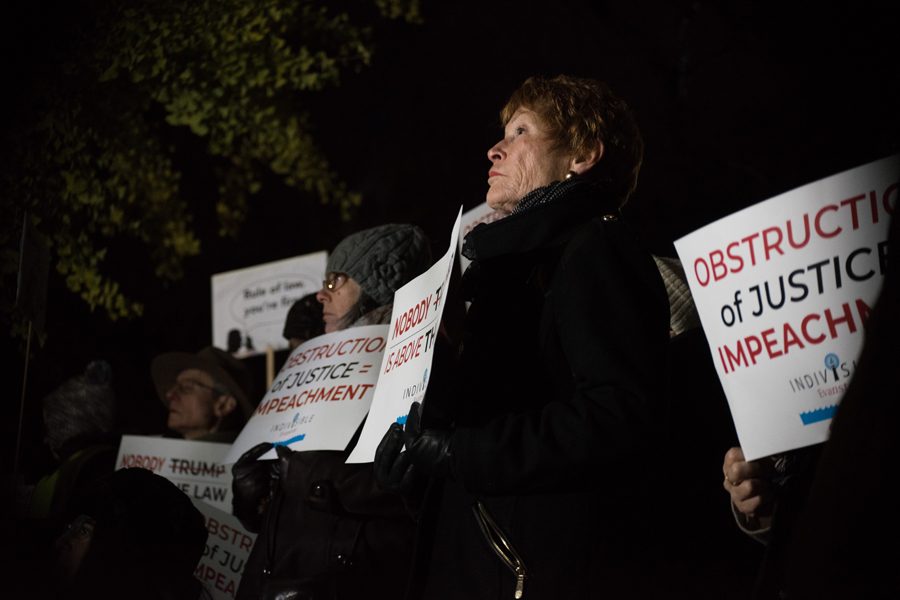 Protestors hold signs at a rally in downtown Evanston. Over 900 people marched through the city in protest of President Donald Trump’s firing of Jeff Sessions.

Over 900 people marched through Evanston on Thursday in protest of President Donald Trump’s firing of Jeff Sessions, who on Wednesday resigned as Attorney General.

The rally, which was held Thursday evening and organized by Indivisible Evanston, came in direct response to Sessions’ firing. Organizers emphasized the importance of supporting the ongoing investigation by special counsel Robert Mueller into Trump’s ties to Russia, from which Sessions had recused himself.

The current Acting Attorney General, Matthew Whitaker, has previously criticized the investigation, leading many to wonder about the future of the inquiry.

The organization hosted a ”rapid response” meeting in Raymond Park, which was open to members of the group and all Evanston residents, before marching along Chicago Avenue. Attendees listened to eight speakers, including Mayor Steve Hagerty and U.S. Rep. Jan Schakowsky (D-Evanston), who discussed constitutional values and the importance of holding all citizens to the law.

Schakowsky said Trump has not maintained his responsibilities as president by criticizing and possibly interfering with the Mueller probe, and that she will be proposing legislation and bipartisan meetings to fight for change.

“I believe that one of the reasons that the Democrats took the House (of Representatives) back is that Americans care about the Constitution and the role of law,” Schakowsky said. “(The constitution) has no party stamp on it. This is about the rule of law. It is very clear that Donald Trump crossed a red line when he fired his attorney general.”

Other speakers — including Andrea London, rabbi at Beth Emet the Free Synagogue and Grace Imathiu, senior pastor at First United Methodist Church — spoke about how their faith supports standing up for democracy.

Linda Tate (Weinberg ’76), the co-leader of Indivisible Evanston, said she and the other members of the organization’s leadership team had asked these speakers to come to Evanston months earlier, in the event that Trump would at some point “get rid of Sessions.”

Tate said that she hoped the rally was able to provide other Evanston residents with an outlet for support and empower them to voice their opinions.

“We are basically here taking to the streets to show everybody that Trump cannot get away with everything and he is not above the law,” Tate said. “Mueller’s investigation is really what separates us from being a democracy and Russia and a lot of other countries out there. So we are here to say we oppose what he is doing and we are not going to be silent about it.”

After the speeches, the attendees marched towards Orrington Avenue and around the block back to Raymond Park. Evanston resident Daina Jauntirans said she rallied because she wanted to do her part in fighting for change in the current government.

“(I marched) because years down the line when my kids asked me ‘what did you do?’, ‘why did you let these things happen?,’ ‘what were you doing at the time?,’” Jauntirans said. “I want to be able to look them in the eye and be able to say that I tried my best to stop this perversion of democracy that is happening at this time.”