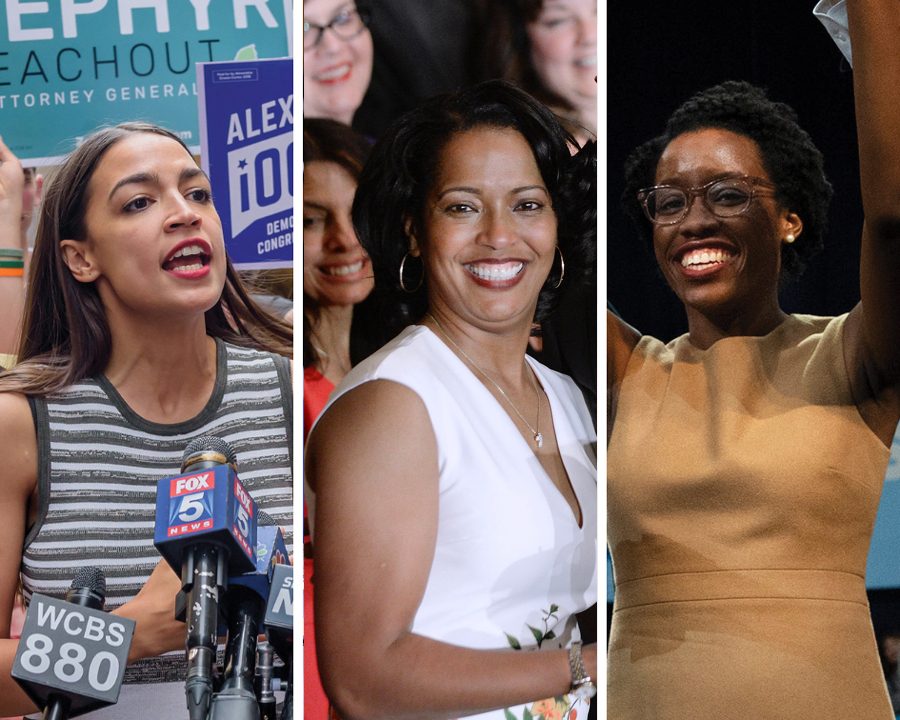 Alexandria Ocasio-Cortez, Jahana Hayes and Lauren Underwood (left to right). Hayes and Underwood — who are both black — and Ocasio-Cortez who is Latina were among the myriad candidates of color who won office on November 6.

“On this night, we made history.”

After defeating six white men to win the Democratic primary, Underwood ran as a challenger to a longtime Republican incumbent in a majority-white district — and she landed a monumental win.

In an election season where 216 candidates identified as black, Latinx, Asian, Native American or multiracial, Underwood was one of countless women of color to defy the odds and win office.

And the barrier smashing continued in Congress. After pulling off one of the biggest upsets of the primary season, Alexandria Ocasio-Cortez cruised to victory as the youngest woman ever elected to Congress. Jahana Hayes was elected as the first black woman to represent Connecticut in the House, while Veronica Escobar and Sylvia Garcia became the first Latina women to represent Texas in Congress. In a record year for Native American women running for office, both Deb Haaland and Sharice Davids became the first two ever elected to Congress.

Palestinian-American Rashida Tlaib and Somali-American Ilhan Omar became the first Muslim women elected to Congress with huge majorities of the vote. Omar said she didn’t run to become “a first,” but rather, to make a difference in the current political landscape.

As Massachusetts’ first black woman elected to Congress, Ayanna Pressley stressed in her victory speech “the historical significance of this evening is not lost on me.”

With no Republican in the race, Pressley’s spot in the House was all but certain — but getting there, she said, was a challenge.

“When it comes to women of color candidates, folks don’t just talk about a glass ceiling — what they describe is a concrete one,” Pressley told the crowd listening on election night. “But you know what breaks through concrete? Seismic shifts.”

Still, some candidates fell short in closely followed gubernatorial races, with two failing to become the first black governors of their respective states.