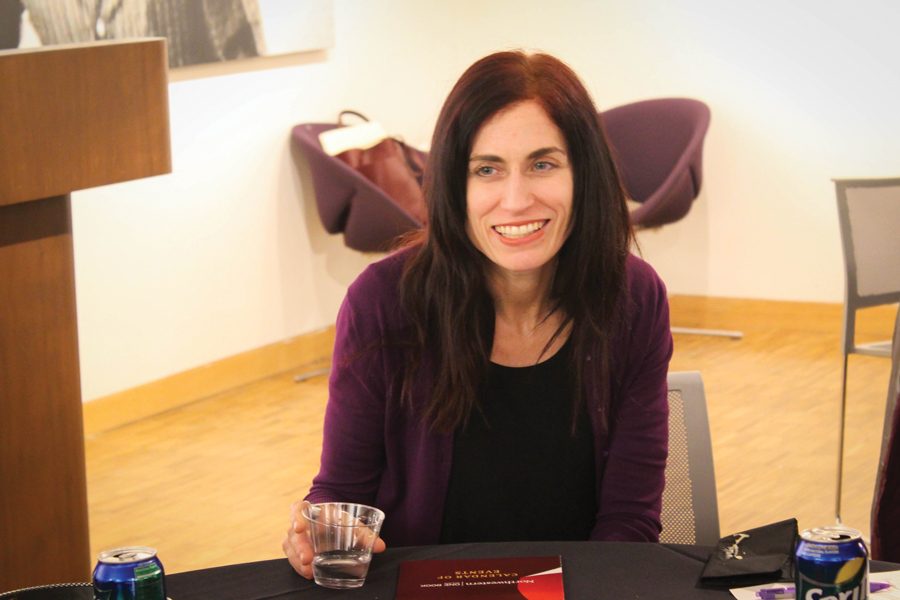 School of Law Prof. Deborah Tuerkheimer engaged with attendees in a small group setting after discussing rape law in the era of the #MeToo movement.

Pritzker Prof. Deborah Tuerkheimer took aim at the nation’s rape laws at a One Book Northwestern event on Tuesday, saying the next stage of the #MeToo movement should reform the nation’s justice system to better allow sexual assault survivors to make allegations against their assailants.

Tuerkheimer, speaking to attendees at the intimate “Dittmar Dinner,” said the current climate is a prime opportunity to make changes to the nation’s rape laws.

“Circa 2018, constraints on women’s agency, sexual and otherwise, have been made newly visible,” Tuerkheimer said to about 45 people at the Dittmar Memorial Gallery. “#MeToo may even produce durable cultural change, but I think it’s still too soon to tell.”

Tuerkheimer is on the One Book One Northwestern Steering Committee, and interviewed author Margaret Atwood when she spoke at NU’s Chicago campus.

Tuerkheimer is currently working on two projects with the American Law Institute. One is aimed at reforming the 1962 Model Penal Code Sexual Assault Provision, which Tuerkheimer said retains a force requirement, meaning that most non-stranger rape is put beyond the reach of rape law. The other project focuses on helping articulate a set of procedures and practices for institutions of higher education responding to sexual misconduct on campus.

“I feel quite fortunate to be a part of these conversations, especially at a time when so much is in flux,” said Tuerkheimer. “This presents a real meaningful opportunity for change.”

Tuerkheimer also raised the conversation of “codifying affirmative consent standards, that yes means yes and only yes,” she said. She recognized that this is a conversation at NU, and compared the progressive discussions about consent on college campuses to the “archaic view of consent” held in criminal law.

“I would suggest that yes, the absence of consent is what transforms sex into rape,” Tuerkheimer said. “In stark contrast, the criminal justice system’s treatment of rape reflects a doctrine that is, in my view, woefully out of step with modern conceptions of sex and female sexuality.”

After Tuerkheimer’s speech, during which she also touched upon current events such as the hearings surrounding Supreme Court Justice Brett Kavanaugh, attendees were guided through discussion questions in small groups. One Book fellows facilitated conversations and Tuerkheimer created the questions beforehand.

“I was nervous to facilitate this conversation because it is such heavy stuff,” said McCormick senior AnnElise Hardy, a One Book fellow. “­­­­­­­­­­­But the discussion was very open, and it’s important to have spaces to talk about this topic.”

Tuerkheimer circulated the room as the groups conversed, and said she was impressed by students’ answers to questions such as, “What is your estimate of the frequency of false allegations of sexual assault?”

Weinberg freshman Tessa Volpe guessed two percent, a spot-on estimate. Tuerkheimer noted that usually, adults guess the frequency to be 50 percent or more, but that research shows it to be a two percent to five percent range.

Audience members seemed shocked to hear that the way Offred, the protagonist in “The Handmaid’s Tale,” is treated by Commander Waterford would not meet the United States’ standard for rape.

“As the path of #MeToo continues to unfold, I think it brings into clearer focus the danger of what we might perceive as rape myopathy,” said Tuerkheimer. “Rape law retains retrograde, repressing features that make it a prime target, indeed a necessary target, for feminist reform.”