In leaked draft rules, federal government plans to allow cross-examination by those accused of sexual assault 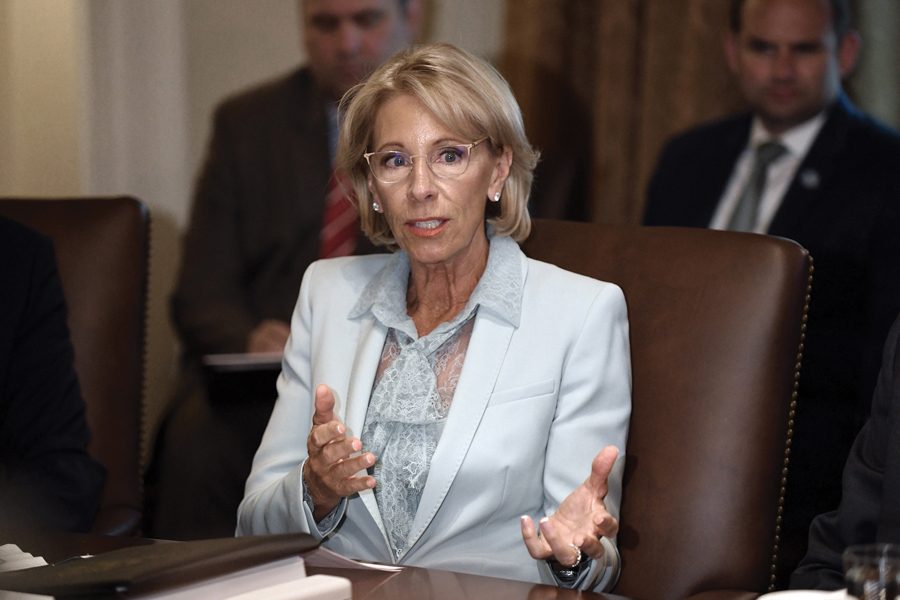 Education Secretary Betsy DeVos and the Republican administration have launched an effort to bolster the rights of the accused. A leaked draft of Title IX rules will allow students accused of sexual assault to cross-examine their accusers.

The federal government is planning to require that schools allow students accused of sexual assault to cross-examine their accusers, a remarkable shift from initial reported drafts of proposed rules and an even wider move away from Obama-era protections for sexual assault survivors.

The proposed rule, reported by the Wall Street Journal this week, would make cross-examination a mandatory process for investigations under Title IX, a federal law barring sex discrimination in federally funded schools. Though the latest draft is less accuser-friendly than a previous version leaked in August, schools could facilitate the cross-examination through a neutral third party, The Journal reported.

It remains unclear if accusers will have a say in how this process plays out. An Education Department spokesman declined to comment on the draft, but acknowledged it is drafting the rules to “clarify schools’ obligations under Title IX in redressing sex discrimination, including complaints of sexual harassment, and the procedures by which they must do so.”

The report was met with immediate backlash.

“The proposed changes will make schools even less safe for survivors and enable more perpetrators to commit sexual assault in schools without consequence,” wrote over 100 survivors of sexual abuse, including former patients of Larry Nassar at Michigan State University, in an open letter to Education Secretary Betsy Devos.

Northwestern’s sexual misconduct policies could change significantly under the new policy, just weeks after the University implemented revisions that gave investigators an ambiguous amount of time to close out complaints.

The news comes at a time when sexual assault remains a crucial issue on campus. Students have mobilized to combat sexual violence, forcing University administrators to prioritize prevention. Many students have called on administrators to do more to protect students, but the new rules could put Northwestern in a legal constraint.

University spokesman Bob Rowley said in a statement that Northwestern is monitoring the forthcoming guidance to comply with the law, but “will also always put the well-being of our all members of our community first.”

“We will remain committed to developing outreach designed to prevent discrimination and harassment (including sexual misconduct), and responding to reports of such behavior in a prompt, thorough, and impartial manner,” Rowley wrote in an email. “The University will also remain committed to providing support and resources to individuals impacted by all forms of discrimination and harassment, even when an individual does not want to move through the University’s complaint resolution process.”

Northwestern received 254 sexual misconduct reports during the 2016-2017 academic year, including 71 reports of sexual assault, according to the most recent data available from the Office of Equity. Of the 94 allegations made against students, 18 were addressed through a formal resolution process that includes an investigation.

Eight reports of sexual assault were made to University Police since the start of this academic year, prompting two investigations that remain open. Rowley said last week those cases, which allegedly took place at off-campus residences, are being investigated by Evanston police.

The University’s sexual misconduct policy states that it investigates complaints submitted by any individual if it would affect the learning or working environment, regardless of location.

Since entering office, DeVos and the Republican administration have launched an effort to bolster the rights of the accused on college campuses. Last September, Devos rolled back much of her predecessor’s added Title IX protections and replaced them with an interim Q&A, arguing that previous guidance had infringed on the rights of those accused of sexual assault.

A leaked draft obtained by The New York Times in August proposed a similar rollback of accuser protections, though it made cross-examination optional. The new rule would allow for this process, which the Obama administration argued would discourage survivors from stepping forward.

The rules would also narrow the legal definition of sexual harassment and allow for informal mediation, which the Obama administration viewed as improper.

The draft is under final review at the White House and will be entered in the Federal Register as a proposed rule, The Journal reported. It will then be finalized and open to comment for 30 days before adopted as a formal regulation. This process will put the current Education Department on stronger footing than the Obama administration’s practice of issuing guidance, which is harder to enforce.