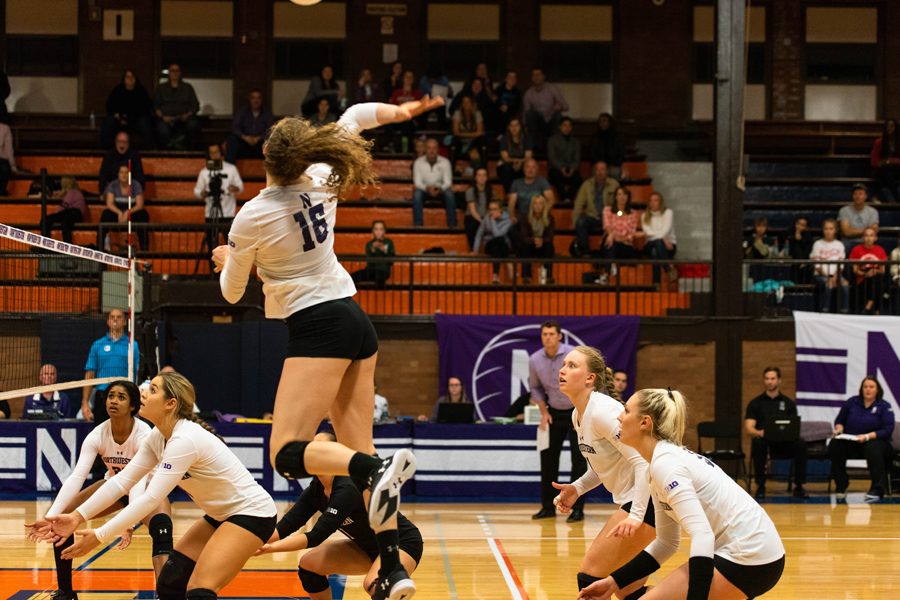 Ella Grbac swings for a kill. The freshman had 17 kills in the win over Ohio State.

Northwestern traveled to Columbus, Ohio, on Sunday — defeating Ohio State in four sets and marking the second win over the Buckeyes for the Wildcats in as many weeks.

Sunday’s win marked NU’s second victory on the road against a conference opponent this season and gave the Cats a season sweep of Ohio State (12-14, 3-11 Big Ten). The Cats (14-12, 4-10) have now won four of their last six matches against conference opponents.

Prior to this stretch, NU had faced eight Big Ten opponents without a victory. Coach Shane Davis is excited by the team’s improvement and ability to win a tough road match at OSU.

“Anytime you can get a win on the road in the Big Ten is a huge accomplishment,” Davis said. “It’s a great testament to our team’s resilience and ability to bounce back this year, especially after our loss at Maryland.”

It was indeed the team’s ability to bounce back and remain resilient that led to its victory Sunday. After a commanding win in the first game, Ohio State capitalized on several service and attacking errors from the Cats to cruise to a second set win. NU had five service errors in the second set alone, and had a .147 hit percentage — easily its lowest of the match.

Freshman outside hitter Ella Grbac said the team came together following the loss in the second game. Grbac finished with a match-high 17 kills in the win.

“In our huddle, we told ourselves the second game wasn’t us,” Grbac said. “We made so many errors that I think we got down on ourselves.”

In the third set, however, the Cats and Buckeyes traded blows back and forth in a set that featured 14 ties and 10 lead changes. After falling behind 22-19, NU scored four straight points to take a 24-22 lead. The set would then continue to bounce back and forth until a block from sophomore middle hitter Alana Walker and a Grbac kill secured the third set victory for the Cats.

“I call that the swing set,” Davis said. “We battled back and forth until our passing settled down, and our blocking picked up. That set carried a ton of momentum into the fourth set as well.”

Following the momentum-swinging third set, NU settled down, took care of business and pulled away from the Buckeyes, 25-20, to secure the season sweep. The Cats held OSU to a mere .121 hitting percentage throughout the match, and had 11 blocks (including four by Grbac and seven by Walker). With four wins in its last six games, NU is flipping the narrative of the season.

“This team is learning and is much younger than years passed,” Davis said. “We’re not making the same mistakes we were making one month ago, so it shows our ability to learn and get better as each match goes on.”

The Cats’ victory on Sunday followed a four-set loss to Maryland (15-11, 6-8 Big Ten) on Nov. 2, in which NU battled hard against a Terrapins team in the midst of an impressive season. NU was within five points of victory in each of the three sets it dropped to Maryland.

Sunday’s win gave the Cats their fourth conference victory of the season. With seven games left in the season, this year’s squad has already matched their conference win total from last year.

Freshman setter Kiara McNulty, who had a team-high 33 assists Sunday, said the team’s recent success is an indication of the direction the program is headed.

“Getting all of our younger players involved and more experienced — myself included — has been big to our success” McNulty said. “We’re headed in a great direction as a program, and it’s really exciting for us.”