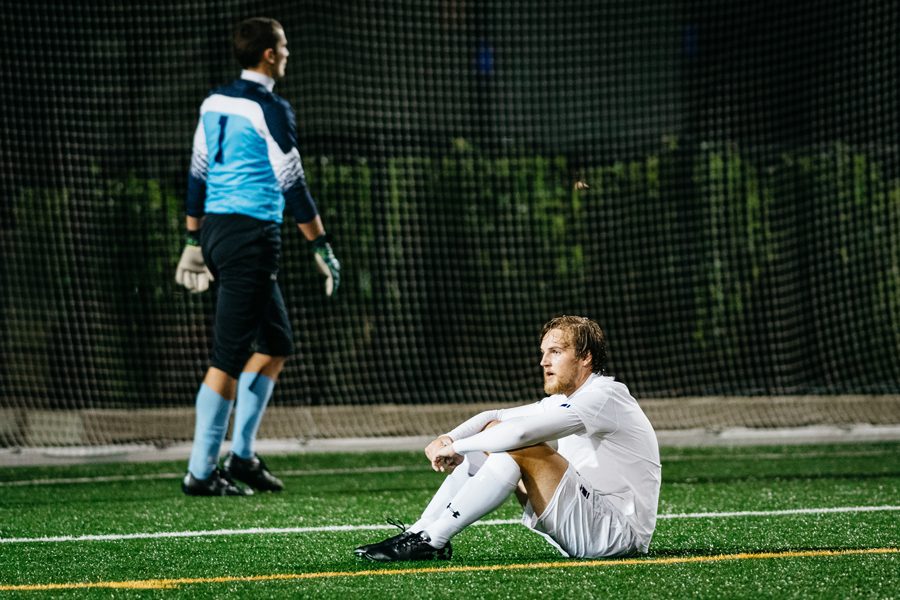 Indiana had been in command against Northwestern all afternoon.

With time winding down and his team trailing 1-0, junior midfielder Matt Moderwell cranked an ambitious shot over goalkeeper Trey Muse that hit off the back post. The ball ricocheted into the back of the net, and the Wildcats had suddenly, shockingly tied the game against perennial power Indiana.

No. 8-seed NU traveled to Bloomington this weekend for the Big Ten Tournament, beating No. 9-seed Ohio State 3-1 on Saturday. The Cats’ season ended just the next day against No. 1 Indiana, when the Cats fell in overtime, 2-1.

NU (6-9-5, 0-5-3 Big Ten) and the Buckeyes (1-15-2, 0-7-1) both came into the weekend without a Big Ten win between them this season, but each side knew something would have to give. The first half was physical and back-and-forth, with seven shots by Ohio State and four by NU.

After a 1-1 split at halftime, the Wildcats began to break away. In the 78th minute, junior forward Ty Seager muscled away his defender in the box. He passed to senior midfielder Camden Buescher, who slotted the go-ahead goal into the bottom left corner.

Buescher — who has been in and out of the lineup all year — had netted a hat-trick the game before against Concordia-Chicago. Junior midfielder Mattias Tomasino liked seeing the big contributions from seniors, in what everyone knew could be their last game.

The Cats did move on, thanks to Buescher’s effort and an 88th minute counterattack finish by Moderwell that gave NU an insurance goal and a 3-1 lead. Immediately after the game against the Buckeyes on Saturday, recovery efforts started. The team had to get their bodies and minds ready for a much stronger opponent in the Hoosiers.

The Hoosiers (16-2-0, 8-0-0) — undefeated in the conference this season — boast the Big Ten defensive player, freshman, goalkeeper and coach of the year for the 2018 season. But that did not deter NU.

The Cats defense was pressed from the start, as Indiana’s powerful attack seemed to come in constant waves. In the first half alone, they piled up 13 shots, three on goal.

“I thought (sophomore goalkeeper Miha Miskovic) made some good saves,” coach Tim Lenahan said. “But I also thought the defense sacrificed everything they had to keep the ball out of the net.”

NU managed to keep the game scoreless until the 80th minute. Then, Indiana midfielder Spencer Glass cracked a shot against the post, sending it skidding across the face of the open goal. It only took his teammate Rece Buckmaster’s sliding deflection to send the ball into the net, and give the Hoosiers their 1-0 lead.

After such a one-sided game, it seemed like a decisive blow. However, nine minutes later Moderwell found himself in the Indiana box, ball at his feet. He rifled off the shot from a near-impossible angle, and jumped away in ecstacy when it hit the back of the net.

The goal sent the contest to overtime, where Indiana kept up its dangerous pressure. Six minutes in, midfielder Francesco Moore chipped a cross across the net and Glass headed in the winning goal.

“Every single person that stepped on the field today and the entire bench was all bringing their best game,” Moderwell said. “Even though we didn’t get the result, we were still very proud of what we put out there today.”