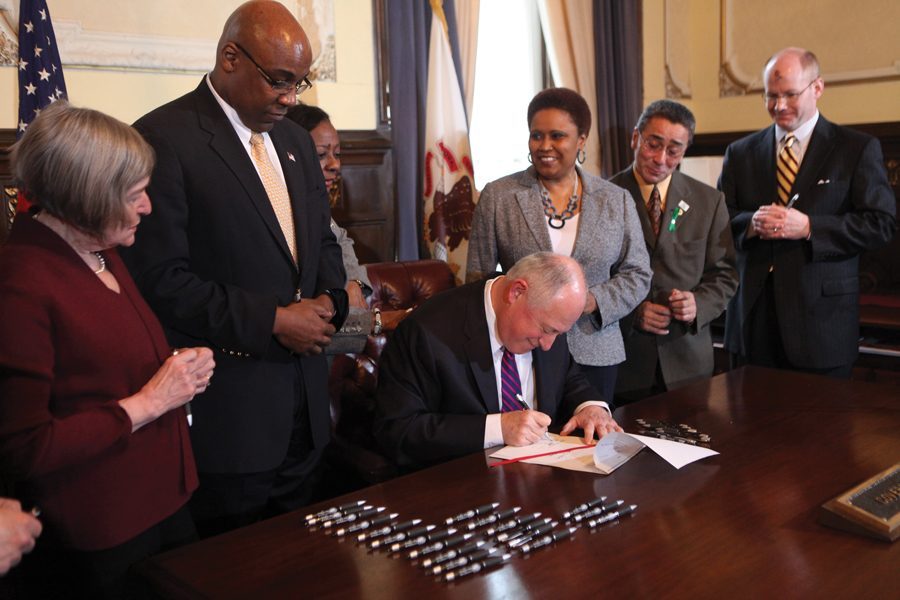 U.S. Sen. Kwame Raoul (D-Ill.) at the 2011 signing of a bill that ended the death penalty in Illinois. Raoul on Tuesday won the race for Illinois attorney general.

The election was expected to be the closest of five statewide races, but Raoul dominated, claiming about 55 percent of the vote as of late Tuesday. Harold has received 42 percent of the vote while Libertarian candidate Bubba Harsy is falling far behind.

Raoul will replace Attorney General Lisa Madigan, who declared she would not run for a fifth term re-election. Madigan has held the seat since 2003.

Although Raoul led against Harold in the polls and received the endorsement of former president Barack Obama, experts were still unsure of his chances going into Tuesday’s vote.

On Nov. 2, Raoul received a last minute $1 million donation from Illinois House Speaker Mike Madigan (D-Chicago), whom Harold has targeted for his complacency in attacking corruption.

Raoul has advocated for gun violence reform in his campaign. He also has said he intends to act as “the last line of defense” against federal opposition to affordable health care, the environment and abortion rights.

At his election party Tuesday, Raoul said he felt there was never a more important time to run for office.

“This campaign was just the audition for the work that is to come, he said.”I’ve spent my career fighting for voting rights, healthcare access and a woman’s right to choose.”

Harold promised to target corruption, which earned her the endorsement of the Chicago Tribune. She also said she would serve as a check in a Democratic-controlled general mansion. In his attack ads, Raoul effectively drew attention to her right-wing social beliefs, including her opposition to LGBTQ rights and to the Affordable Care Act.