Northwestern has one of the highest voting rates among universities 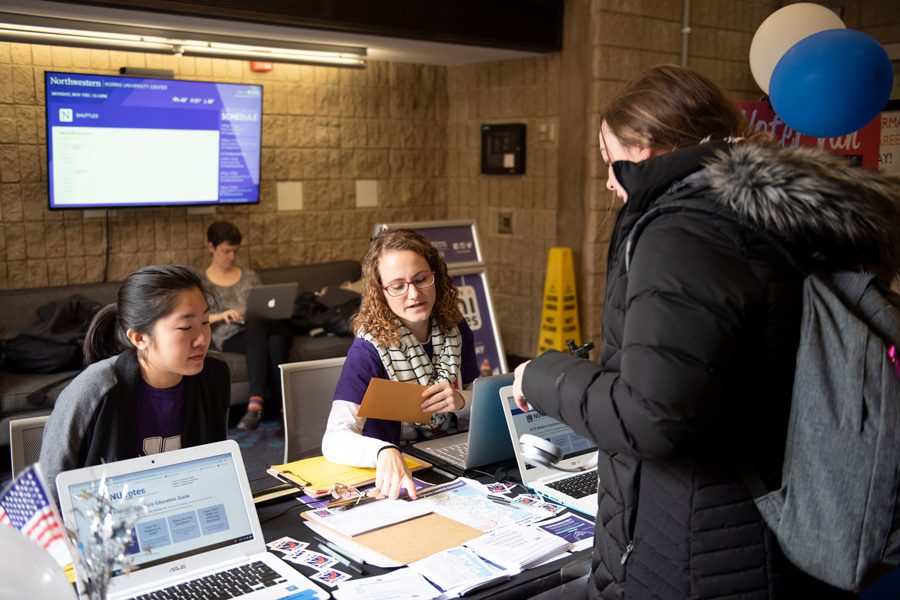 An NU Votes staffer asks a student to fill out a form at the voter van table. NU Votes ramped up its voter turnout initiatives leading up to the midterm elections on Nov. 6.

Information stations, “voter vans” and online education guides at nuvotes.org: in preparation for the 2018 midterm elections, NU Votes is pulling out all the stops to make sure Northwestern students are voting on Nov. 6.

NU Votes — a non-partisan initiative of the Center for Civic Engagement — is aiming to boost NU’s turnout above its 2014 midterm elections turnout of 22 percent, which was already four percentage points above the national average for college students.

Rob Donahue, the associate director of CCE, said NU Votes’ most successful measure has been giving students the opportunity to register to vote on the first day of orientation. Before starting first-day registration several years ago, between 25 and 35 percent of incoming freshmen were registered to vote, Donahue said. By 2016, over 90 percent were registered to vote every year after the first day of Wildcat Welcome.

SESP freshman Joanne Lee turned 18 after the primaries this year and registered to vote at orientation. Lee said she would have had to do her own research on registering if she hadn’t been able to do it at NU.

“Having (registration) in the check-in process was nice just because it was right there, and they were like ‘Hey, it only takes five minutes,’ and I was like ‘Sure, I needed to do it anyway.’ So in that sense, it was convenient,” Lee said.

Medill senior Darby Hopper, a former Daily staffer on the NU Votes staff, said some states have rules that make it harder to vote — in Michigan and Tennessee, for example, most people who register to vote by mail cannot vote absentee in their first election.

Part of the reason Northwestern has such high registration and turnout rates, Donahue said, is because NU Votes has resources for students who choose to vote outside of Illinois, such as a yearly education guide that includes deadlines and registration information for every state.

In addition to giving students the opportunity to register to vote or make updates to their registration on the first day of Wildcat Welcome, NU Votes offers additional resources — such as a week-long registration station at Norris University Center and the “Voter Van” to take early voters to stations — before elections to increase turnout.

Hopper said in addition to registering students at orientation, the reason NU Votes has been so successful is its visibility. She said NU Votes’ presence in Norris encouraged students to register or ask questions who otherwise might not have thought to do so.

“It’s not necessarily the first thing students remember every day: I can vote in this country,” Hopper said.

Donahue believes NU has contributed to a national conversation about higher education’s role in preparing students to be responsible citizens.

“It’s good to show the rest of the country what is possible when you give young people the chance to express themselves and make it easier for them to get their voice out and get involved with the system,” Hopper said. “Too often I feel like we’re disenfranchising kids before they even get the chance to participate.”