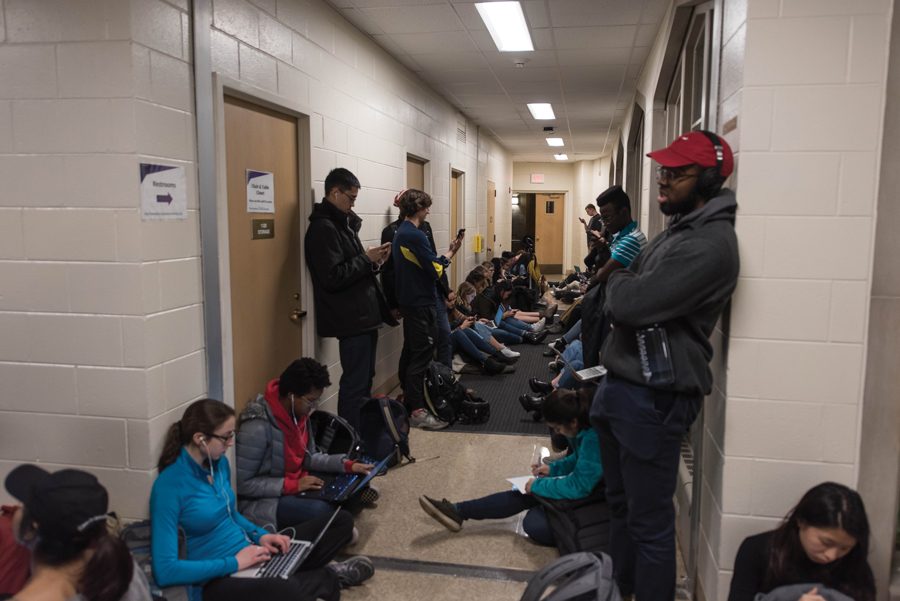 Voters wait to vote at Parkes Hall in 2018. Northwestern does not plan to host a polling location this Election Day.

Some South Campus voters waited for as long as two hours before voting at Parkes Hall on Tuesday.

Students sat in the halls as they waited in line, some doing their homework or reading up on the election.

The wait shocked some who had voted there before. High turnout this year, plus the fact that voters are allowed to register at the polling station, likely contributed to the long wait times, said Eamon Kelly, Evanston Democratic Committeeman.

Evanston resident Michael Ilahi, who has voted there since the 1980s, said he “never imagined the wait would take this long” and that he was impressed by how many Northwestern students were participating.

“Everybody is fully engaged with current events,” said Marc Abramson, the precinct’s equipment manager. “This is exceptional. We’ve had way above average turnout.”

Abramson said the results were “consistent” with his experience administering early voting at sites in Skokie, where he said people of all ages and nationalities turned out in large numbers.

Voter turnout in this election has been high across the country. Northwestern also facilitates voter registration for freshmen and transfers as soon as Wildcat Welcome, part of an initiative from NU Votes.

“It’s the first major election that’s happening since the 2016 presidential election,” said NU Votes member Jessica Wang. “I think that has really motivated a lot of people to say, ‘We’re tired of what’s been going on in the past two years and we want to exercise our political power.’”

Although the wait may have deterred some students, others emphasized the importance of civic engagement.

“I’ve voted here five times and I’ve never waited in line before,“ SESP senior Alexa Sledge said. “I think this year Northwestern has done a really good job with clear messaging about ways to vote, so we’ll have a really high turnout. I see (the wait) as a positive thing.”

With polls closing at 7 p.m., people stayed until around 8:30. Some unofficial volunteers also ordered pizza, saying they didn’t want prospective voters to leave because they were hungry.