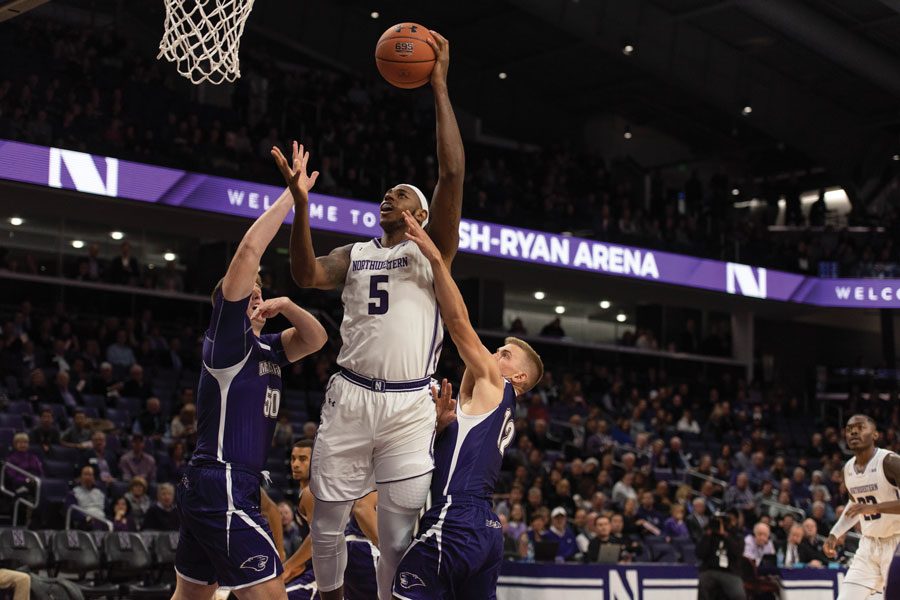 Dererk Pardon finesses in the post. Pardon had 11 points on Thursday, but only had one field goal attempt in the second half

It’s not a stretch to say Northwestern was the only program in the country with three five-star recruits at its exhibition game.

But on Friday night against McKendree, Patrick Baldwin Jr., Max Christie and Caleb Furst — all five-star recruits in the Class of 2021 — were sitting in the first few rows of the lower bowl at Welsh-Ryan Arena.

During a game where no one played more than 25 minutes or took more than 11 shots, it’s hard to project what the recruits could have taken away from the first game in the renovated arena.

But they were watching — and they will be all season.

As the Wildcats slumped to a 15-17 campaign last year and lost their final seven games, they lost some of the momentum the program created in 2017. Attendance was already down because of NU’s temporary transition to Allstate Arena, but having five students in the student section at tipoff for a 71-64 home loss against Maryland left a negative impression.

The incoming freshmen replacing Bryant McIntosh, Scottie Lindsey and Gavin Skelly all committed in the immediate aftermath of the infamous 2017 campaign, and it’ll be a difficult sell for Baldwin, Christie and Furst if the Cats follow last year with a season that feels the same way. Since last year’s senior class didn’t have much success until its 2017 NCAA Tournament run, Collins wasn’t able to recruit freshmen as talented as forwards Pete Nance and Miller Kopp in 2015 and 2016.

To prevent history from repeating itself, a goal for this year is restoring the national perception NU had the last time it played a full season in Welsh-Ryan Arena.

In a preseason media poll, the Cats were slated to finish 12th in the Big Ten, which would be their lowest ranking since the conference expanded to 14 teams. At the conference media day, when coach Chris Collins was asked about the poll, he acknowledged that he saw it but the results were “all good.”

“I think this year is going to be a surprise,” junior forward A.J. Turner said. “Not for us, because I think we know what we are capable of. But for other people.”

This season could go one of two ways for the Cats: they’ll gain recognition as one of the most dynamic young teams in the country, or they’ll be perceived as just another interesting rebuilding team in the Big Ten.

The former happens if Collins’ lineups lacking a point guard but featuring several high-flyers score well enough down the stretch of close games. But if not, Collins will continue selling fans on the program’s future, exactly what he did after McIntosh’s freshman year.

All but three high-caliber Big Ten teams lost noteable starters, and the conference is significantly weaker than it has been recently. NU will be in more competitive Big Ten than last season — either the Cats win a lot of games and return to the NCAA Tournament picture or they won’t and the season will evolve into a developmental one.

In order to continue on the trajectory Collins is expecting, there’s legitimate pressure on Pardon to anchor a strong defense, Law to increase his offensive output and Nance and Kopp to live up to the expectations as some of the highest ranked recruits the program has ever signed.

The sixth-year coach called this season a “bridge year” for the program, and he’s right that the program’s future is linked to this year’s performance. Those are the stakes for a year many could overlook following the departure of last year’s seniors.

Contrary to popular perception, one of the most important campaigns in Northwestern basketball history starts Thursday.