Volleyball: Northwestern looks to go 2-0 during weekend matches against Ohio State and Maryland 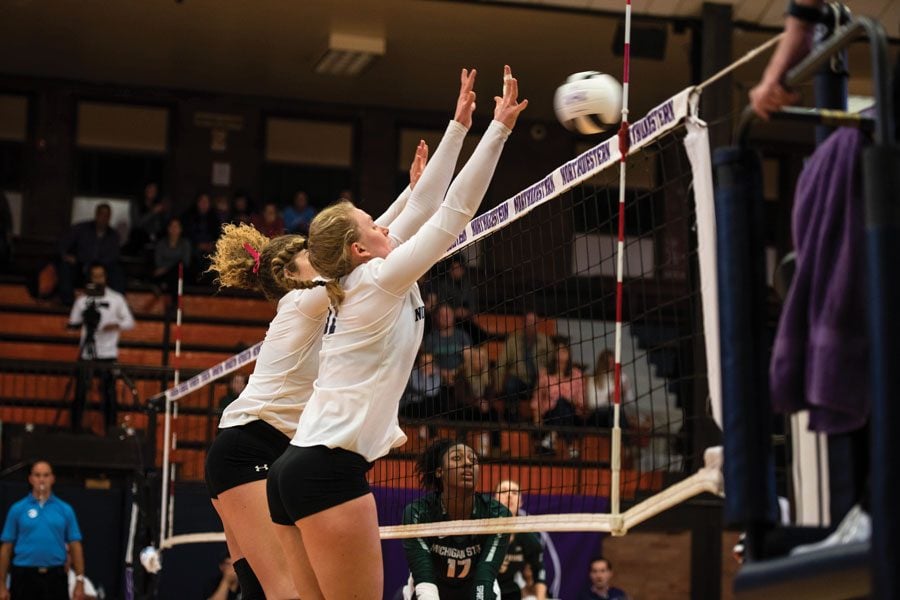 Britt Bommer and Ella Grbac jump for a block. Bommer and Grbac will look to help the Wildcats pick up two victories this weekend.

Before playing its first game in the new Welsh-Ryan Arena next week, Northwestern will head on the road to face Maryland and Ohio State.

The Cats, who played their final game in Beardsley Gym on Sunday, enter this weekend having won three of their last four games. The Terrapins, on the other hand, have lost four out their last six.

As a team, Maryland (14-10, 5-7 Big Ten) has a .213 hit percentage, but sophomore setter Nicole Alford and freshman middle blocker Rainelle Jones lead the team with rates of .271 and .268, respectively.

Fortunately, NU (13-11, 3-9) has started to find its grove after losing eight straight games to begin Big Ten play, including six games against ranked in the top 25. In their last three victories, the Cats have hit .233, which is an improvement from .195 average on the season.

In addition, NU’s two highest hitting percentages in conference have been in its last two contests. After hitting a remarkable .321 against Iowa on the road, NU’s hitting percentage was .258 against Ohio State and the team will look to continue its success again on Sunday in Columbus.

Sunday, the Cats beat the Buckeyes (12-12, 3-9) in straight sets and sophomore middle hitter Alana Walker led the team with 10 kills and a .571 hitting percentage. She was not the only player who contributed efficiently as Olivia Viscuso had a .471 hitting percentage and Kiara McNulty added 23 assists.

Winning both games this weekend would be huge for the Cats as they currently sit at 11th in the Big Ten, tied with Ohio State. At 3-9, two wins could separate themselves from the Buckeyes and move up the standings and catch up with Maryland, who currently has a conference record of 5-7.