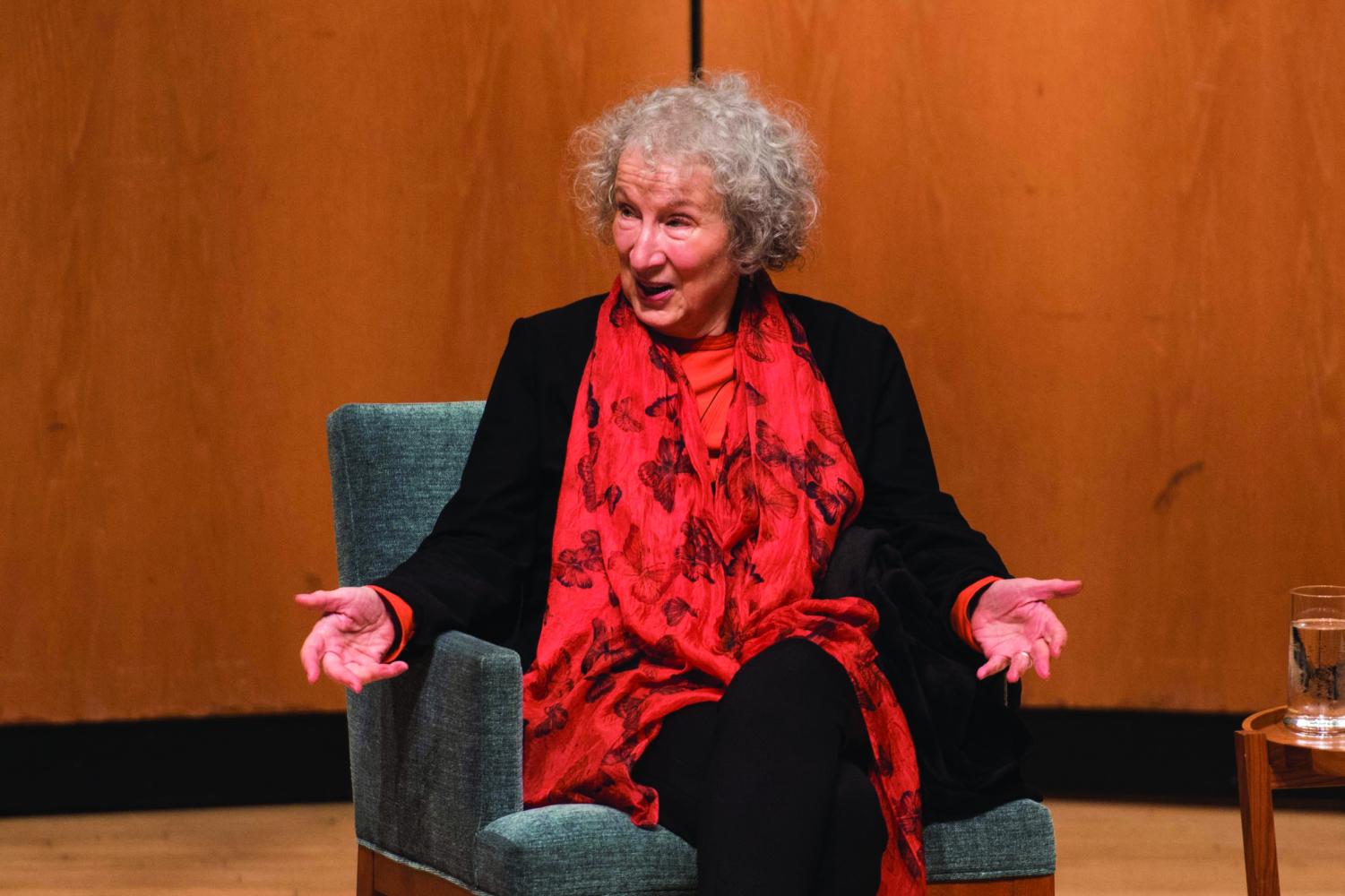 If you’ve seen a shock of red in a besuited D.C. courtroom or a white-hooded woman quietly protesting in front of the Capitol, you’ve seen the work of Margaret Atwood incarnate. Inspired by Atwood’s bestseller “The Handmaid’s Tale,” these women model themselves after the novel’s handmaids — fertile women forcibly raped each month by a brutal elite class. Their presence at high-profile political events like the Senate hearings for now-Supreme Court Justice Brett Kavanaugh is unmistakable and sends a clear message of how they feel.

On Atwood’s part, the award-winning novelist commends the protestors tactics, calling them “perfect.”

“Nobody can accuse (protestors) of dressing immodestly, and (they) can’t be kicked out for causing a disruption because (they’re) not saying anything,” Atwood said. “But anybody looking at it understands it.”

Atwood spoke at a One Book keynote Tuesday at Pick-Staiger Concert Hall to a sold-out audience in a conversation with English Prof. Helen Thompson. Her novel, “The Handmaid’s Tale,” is the program’s 2018-2019 selection for the academic year and was sent to all first-year students over the summer.

The book focuses on a dystopian reality in which the United States government has been overthrown by a theocratic regime. In this “Republic of Gilead,” the ruling class of men subjugate and blame women due to a massive fertility crisis. Justifying themselves with a passage from the Old Testament, men assign Gilead’s remaining few fertile women to households to bear children for its husband and wife. The novel’s protagonist, Offred, is one of these “handmaids.”

In a post on the One Book website, Thompson said the popularity of Hulu’s television show of the same name was part of why “The Handmaid’s Tale” was chosen as this year’s One Book. More importantly, though, she said the book compels its readers to examine the current national conversation about sexual assault, restrictive politics and the #MeToo movement.

“Atwood’s vision of a totalitarian theocracy in which fertile women’s bodies are directly controlled by a ruling caste of men has assumed urgent elements to the current political moment,” Thompson said in her introduction of Atwood.

Acknowledging the “creepily real” actuality of some of the events depicted in the novel, Atwood said nothing in the book is completely fictional—she took true stories from different parts of the world and wove a narrative from them. As opposed to labeling her books as works of science fiction, she instead refers to her books as “speculative fiction,” meaning, she said, these events are based in reality.

In writing “The Handmaid’s Tale,” Atwood said she was inspired by three different historical areas of study: 17th century Puritan New England, 20th century totalitarianism and the 1980s backlash against women’s reproductive rights. Atwood said the book’s New England setting was meant to be “shocking,” since the region was the birthplace of the American Revolution.

The book has become more relevant since its original publishing in 1985, Atwood said. Citing the recent pipe bomb threats against Trump critics and the Pittsburgh synagogue shooting as examples, Atwood said there is valid concern the democratic ideals America has represented for centuries are now under threat.

“This time that we’re in right now, I’ve never seen anything so close to the 1930s in the 78 years I’ve been alive,” Atwood said. “The 30s were very polarized and saw the rise of a number of fascist states, and a very active right pitted against a very active left. In either case, totalitarianism is emerging…and (dictatorships) all try to control women, one way or another.”

Although the novel feels more pertinent in recent times, Atwood said she wouldn’t change the recording method Offred uses to tell her story. In the book, Offred creates the narrative in her own head, due to a ban on reading and writing for women. In an epilogue, it is revealed “The Handmaid’s Tale” has been mysteriously preserved on a series of cassette tapes and is now studied by scholars of the Gilead era.

Atwood said even though new technology has been invented since the book’s original publishing, this would not change Offred’s recording system, as she needed something she could hide away from the rest of the world until the dictatorship had fallen.

During the talk, Thompson spoke about a recent second epilogue added to the novel’s audiobook which includes a strange message from a Gilead scholar who tells the listener to wait one or two more years for more news on the regime. Thompson then asked if there was a possibility of a sequel to “The Handmaid’s Tale.”

To that, Atwood gave a coy smile.

“November the 29th is the big day,” she said mysteriously. She did not comment further.

The future implied by the epilogues foreshadows the eventual fall of the book’s authoritarian government, but it’s unclear if this is thanks to the secretive resistance group discovered in the novel, Mayday.

Atwood said Mayday is representative of the many protest movements against oppressive governments, citing Nazi opponents and members of the Underground Railroad as examples, and reminding the audience, “there are always resistances, organized or not.”

She noted college students, especially those of today, are more resistant and politically engaged than those of the previous generation because of current administration policies and the frequency of tragedies such as mass shootings. She said she was excited to speak to Northwestern students because of the effect young people have on the future of the country.

Her advice to this generation of college students?

Most of all, she said, “The Handmaid’s Tale” is a story of an ordinary woman to whom extraordinary things happen. As seen in many of the histories that served as inspiration for the book’s plot, it’s never out of the realm of reason to think a sequence of extraordinary events could begin at any moment.

“Never say it can’t happen here, because these things could flip a lot faster than you think,” Atwood said.