It was 1889 when Northwestern and Notre Dame met for the first time in football.

The two programs have inscribed 129 years of indefatigable history since, albeit a decidedly unbalanced history at that. The Fighting Irish have won 37 head-to-head meetings, captured 11 national titles and produced seven Heisman Trophy winners. The Wildcats have won nine times, captured no national titles and produced zero Heismans. One program has cemented itself as one of the most storied in college athletics; the other has broken out of irrelevance only on a few special occasions.

Yet this Saturday, it is the former of those programs heading on the road and putting its college football playoff aspirations in serious jeopardy against the latter.

Indeed, for the first time since 1976, the next chapter of NU and Notre Dame’s rivalry for Chicago’s hearts and spoils will be written at Ryan Field, before 47,130 fans ready to watch Evanston’s most anticipated sporting event in years.

They’ll see a Wildcats team, led by arguably its most accomplished quarterback of all time and currently in pole position in the Big Ten West race, host an undefeated, No. 4-ranked Fighting Irish squad with eyes on a 12th title.

The stakes can’t be overstated.

It was 1930, and again 1936, when the Wildcats entered the final game of the season undefeated — with the national title within reach — but were felled by the Irish. Within that stretch, the two teams began playing for a knobby walking-stick trophy known as the Shillelagh, a tradition that lasted three decades.

It was 1962 when Cats entered their Notre Dame matchup ranked third, following a big road upset of Ohio State. They exited ranked first, having pummeled the Irish — for their fourth win in as many years in the series — in front of the biggest crowd in Dyche Stadium (now Ryan Field) history.

Larry Benz, a fullback who had thrown two trick-play touchdowns passes in the team’s 12-10 road win the year before, does too.

Not since that era of Ara Parseghian has NU defeated a top-5 team at home — they last did so in 1959, upsetting Oklahoma — or been ranked No. 1 in the AP Poll. Parseghian, in fact, may have accomplished a bit too much for the Cats’ own good. It was 1964 when Parseghian was lured away from Evanston to become the head coach in, of all places, South Bend. 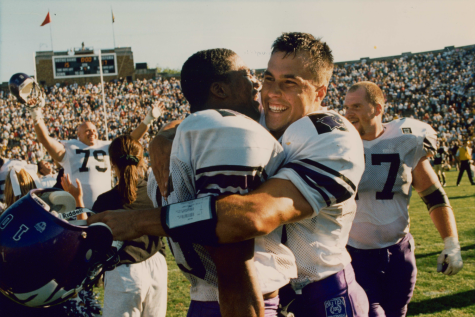 It was 1995, three long decades later, when NU stunned Notre Dame in the season opener to spark the fabled Rose Bowl season, signifying the program’s return to relevance.

Those Gary Barnett-led Cats entered Notre Dame Stadium as four-touchdown underdogs, kicking off a season that pundits overwhelmingly expected would be the program’s 24th consecutive losing campaign. That team featured a new starting running back named Darnell Autry, who went on to finish fourth in Heisman voting, and a junior linebacker named Pat Fitzgerald.

NU walked onto the field with confidence that steamy afternoon and, against all odds, walked off three hours later equally confident, as 17-15 victors.

“You don’t even go into that stadium awestruck, because if you do, you’re going to lose,” Barnett said to The Daily this week. “In my pregame talk, I had said to them that after we win this game, I do not want Gatorade on me and we have to act like we’ve been here before. On the field, that’s the appearance that we gave: We didn’t want to act all giddy and stupid on television. We wanted to look like a team that was assured.”

But in the locker room? 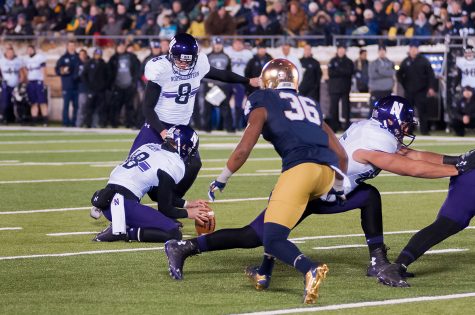 Finally, it was 2014 when the two schools ended a 19-year stretch without a single meeting, the longest the programs separated by a mere 110 miles had stayed apart since 1920, on a frigid evening in South Bend.

Cats kicker Jack Mitchell played hero that night, drilling a 45-yard field goal to force overtime in the waning seconds and a 41-yarder in overtime itself to give the purple visitors yet another unlikely victory in Notre Dame Stadium.

“You come in with your own sense of, ‘This is Notre Dame, and I’ve seen them play on TV plenty of times, and I know this stadium and that lots of historic things have happened here.’ At the same time, it’s also just another game,” Mitchell said this week.

He then admitted that once the game came down to him, he had none of that big-picture perspective.

“You just have to go with it and it happens,” Mitchell said. “There aren’t thoughts running through your head at that point.”

If those three victories represent the glorious apexes of NU’s Notre Dame history, though, they do little justice to the vast swamps in between. It was the late 1960s and early 70s when the Irish beat the Cats 11 straight times — each by 20 or more points, including a combined 134-3 margin over their last three trips to Evanston. 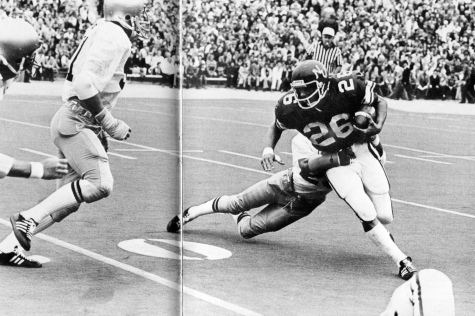 Source: Northwestern Archives / 1976 Syllabus Yearbook
Northwestern struggled to find much room to run in their 1976 game against Notre Dame at Ryan Field.

The last of those, a 48-0 drubbing on Sept. 25, 1976, marked the last time — until this weekend — that Notre Dame played beneath the matching corner towers of Ryan Field. University archivist Kevin Leonard was there.

“Northwestern was flattened, pulverized, by Notre Dame that day,” Leonard said. “They just ground them to bits.”

Randy Dean quarterbacked the Cats that afternoon, completing six of 16 passes for 77 yards and two interceptions. Nowadays, he doesn’t even remember the score of the game — “Selective memory,” he attributes as the cause, chuckling.

But he is bringing his whole family from Milwaukee to Ryan Field for the Irish’s return this weekend, and as he watches the action transpire before his eyes Saturday, it’ll carry a tinge of nostalgia.

“This is ideally what we would’ve liked when I played 42 years ago, to have this type of expectation for this game,” he said.

Bringing the Irish back

Their conversations in early 2011, scheduling the two-game series between the two schools that resulted in the 2014 game as well as Saturday’s contest, were no different.

Phillips, a former administrator at Notre Dame himself, had to convince Swarbrick that sleepy, historic, 47,000-seat Ryan Field was a suitable venue for the vaunted Irish. The last two times Notre Dame played the Cats outside of South Bend — a 42-7 win in 1992 and a 42-15 win in 1994 — the games were held at Soldier Field, a neutral site. NU had millions of dollars in ticket revenue and invaluable exposure to gain from getting an actual home game this time around.

They also had an important scheduling conundrum to resolve. The Cats were slated for only four Big Ten home games in 2018, meaning they needed all three non-conference games to take place at home in order to hit the seven home-game threshold most major programs consider necessary. That’s often not easy to do when dozens of other schools are trying to do the same.

“There’s just not that big of an inventory (of non-power-five schools) to go across the 65 power-five schools,” Phillips told The Daily last year. “And then you don’t have a 110,000-seat stadium here that’s generating $50 a ticket. You have a 45,000-seat stadium. And so the economics are tough, when you’re going up against somebody else in the Big Ten to find a partner.”

Phillips has often turned to other academically selective schools with major athletic programs — “peer institutions,” he calls them — for his non-conference scheduling, and has found success doing so. Stanford, Vanderbilt, California, Rice, Boston College and Syracuse have already faced NU so far this decade.

But it is one thing to host the Rice Owls, and another to host the Notre Dame Fighting Irish. Doing the latter is truly indicative of “the maturation and the development” of the Cats’ football program, Phillips said.

And after those calls with Swarbrick, after working out the logistical kinks and the timing difficulties and the economic viability, Phillips made that very thing happen. The home-and-home series was officially announced in April 2011.

“I think it’s important to have a game like (this) on our campus, in our community, in the city of Evanston, to shine a really bright light about a great area,” Phillips said. “It really didn’t take a ton of back and forth.”

For the first time in institutional memory, tickets to this contest were available only through purchasing season ticket packages. A huge turnout of Notre Dame alumni living in the Chicago area is anticipated, as well. As of Wednesday, resale tickets on the popular website StubHub began at $120, and went as high as $686. Tickets for the Nov. 24 Illinois game, meanwhile, start at $6.

What this game means

But Thomas still found his life in Indiana dominated by Irish references because his high school, Cathedral, modeled itself after the prestigious university.

“We had the same gold helmet type. We were an independent school. And the Irish Way and ‘Play like a champion’ slogan, all those things that are taught at Notre Dame, were a carbon copy,” Thomas said.

Not many current Cats players chose NU over Notre Dame during their high school recruitment process, simply because the two schools typically recruit within very different tiers in the recruiting hierarchy. Junior cornerback Roderick Campbell is one of a mere few who did, and though he picked the Cats, he said he still viewed receiving the Irish offer “as a validity thing — it was like, ‘Maybe I’m pretty good.’”

“I know it means a lot to a lot of our guys,” Butler said of Saturday’s game, shortly before insisting “there’s nothing in my heart for them anymore.”

Even Pat Fitzgerald himself at one point clearly harbored resentment for the Irish, even if he won’t dare speak of it now. “I enrolled at Northwestern so I could beat Notre Dame,” he famously told reporters after the 1995 win.

In one sense, Saturday’s game means very little. Regardless of the result, NU will remain 5-1 in the Big Ten and maintain its lead on the West division heading into a decisive matchup next week at Iowa.

But in another sense, Saturday’s game means more than any other night of football Evanston has seen in years, dating back at least to the 2013 College Gameday matchup against Ohio State.

The history is there, for over a century. The emotion is there, embedded within the hearts of many Cats players who, long before their own college days, either dreamt of playing for Notre Dame or playing against the Fighting Irish. And in a stroke of fortune not even Phillips could have anticipated seven years ago, the stakes are there, too: Notre Dame is an unblemished 8-0, boasting wins over the likes of Michigan, Stanford and Virginia Tech already, and a projected playoff team as of now.

Even for NU standouts like junior receiver Bennett Skowronek, who grew up in northeast Indiana but said he has no personal Notre Dame ties, that last factor alone is enough to make this game special.

“It’s not every day you get to play one of the top-ranked teams in the country, sold out, at night, in your home stadium,” Skowronek said. “Those are the games you dream about as a kid. Those are the games, when you’re being recruited, that you want to play in.”