Gun culture is alive and well but students hope for change 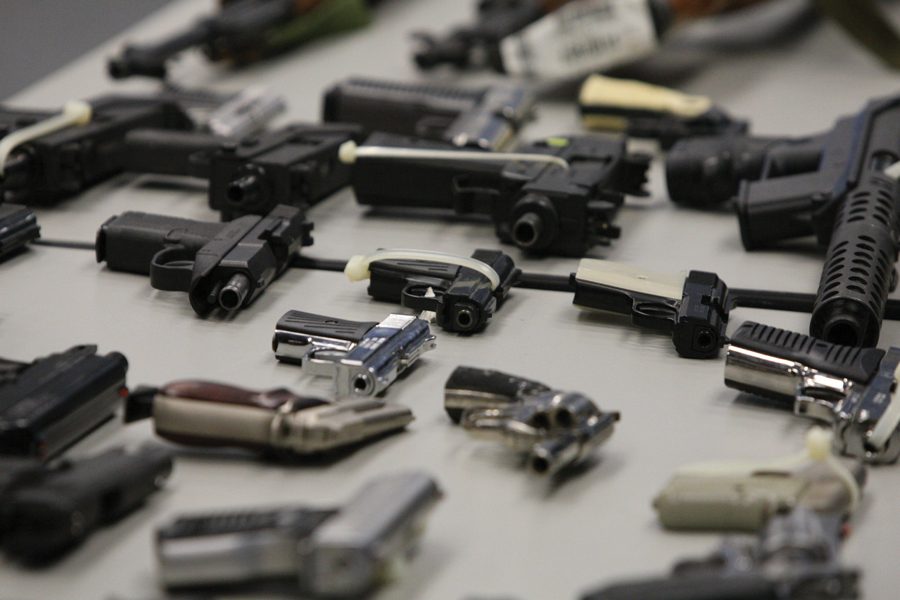 Confiscated guns on display at police headquarters in Chicago. Despite a 28 percent reduction in shootings since last year, Chicago is still one of America's deadliest cities.

Ahead of the November midterm elections, Daily reporters are speaking to voters about issues they’ll take to the polls. In this article, students tackle the issue of gun violence.

Anna Margevich has grown numb to the bloodshed.

The Medill freshman said she walked out of her high school after the shooting at Marjory Stoneman Douglas High School and participated in a city-wide march against urban crime — all to come home, day after day, to see more disturbing headlines and more lives lost. As a Chicago-native, Margevich said she knows gun violence all too well.

Research does too. Despite recent reductions in firearm-related deaths — data from the Chicago Police Department in February found a 28 percent reduction in shootings relative to 2017 — Chicago still remains one of America’s deadliest cities. Data has consistently shown that rates of gun violence in Chicago are far higher than those of Los Angeles and New York: the biggest cities in the U.S.

Vulnerable populations are hit hardest by Chicago’s crime problem. A 2017 report by the University of Chicago’s Crime Lab found that most victims of the city’s warfare come from the same five struggling neighborhoods. Between 2015 and 2016, more than half of Chicago’s homicides affected black men between the ages of 15 and 34, even though they made up only four percent of the population.

The causes for Chicago’s chronically high rates of violence are manifold, according to Northwestern students and researchers.

Margevich said the failure to successfully nationalize gun control measures has spelled disaster for city centers like Chicago: State-level gun control measures, she said, are insufficient to stem criminals, who can simply drive to neighboring states with weaker firearm provisions, like Indiana, to obtain weapons. Without comprehensive, federal gun restrictions, local crime-abatement efforts are sure to be meaningless, Margevich said.

“Even if you take guns out of the picture, there can still be mass murderings of people,” he said, referring to hate crimes involving guns. “Although guns are part of the problem, racism and bigotry — driven by a lack of education — represent the root cause of gun violence.”

Even beyond Chicago, a recent national wave of student-driven activism has ignited the political spirits of millions. But that has yet to translate into federal gun control policy.

“The U.S. is still an international outlier in terms of gun violence, so even if average rates have improved slightly, we still have a much bigger problem than most comparable countries in the world,” said Matthew Lacombe, a Northwestern doctoral candidate.

Lacombe wrote his dissertation on some of the reasons why more comprehensive gun reform has yet to take hold, despite having popular support. He found that the National Rifle Association’s political strategy plays a big role.

Lacombe said over the past century, the NRA has created a cultural narrative of the gun-owner — associating ownership of firearms with patriotism and lawfulness.

“Guns serve as a symbol of a particular traditional worldview based on self-sufficiency and order,” he said. “By associating guns with a certain set of beliefs and characteristics, the NRA has made an identity out of gun-ownership, and it’s used this to mobilize supporters into political action on its behalf.”

Margevich added that political divides can also explain the impasse. The Republican-controlled government is beholden to the pro-gun interest groups, making progress all-but-impossible, she said.

But, with the upcoming midterm elections, Lacombe said he is hopeful that progress can be made.

“If young, gun control supporters are perceived to have an impact on midterm results, it would send a signal that gun control is a winning issue for the Democrats,” he said. “If they choose to emphasize their support for gun control, it could be politically advantageous.”

For Chicago residents, the matter has a long history.