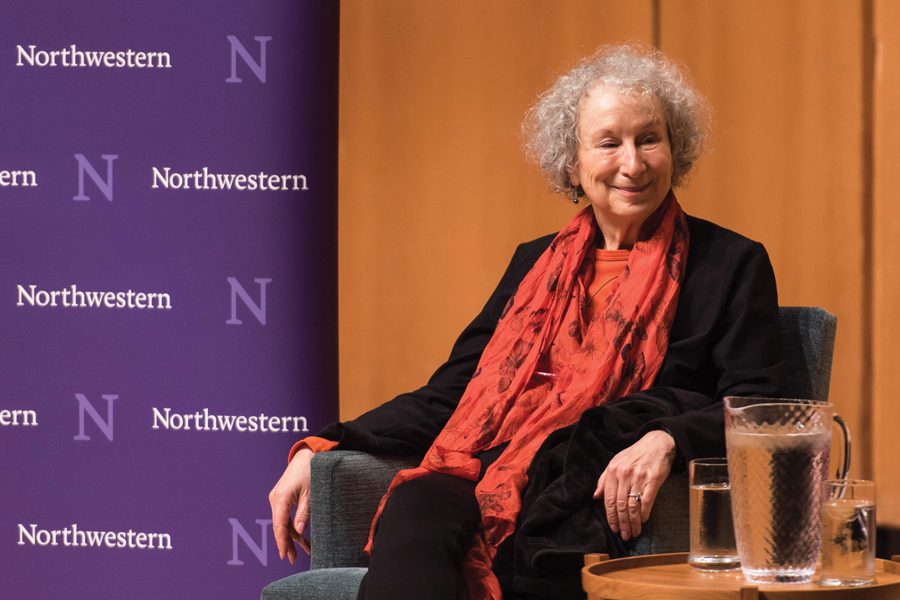 Hulu’s take on “The Handmaid’s Tale” had already begun filming when the 2016 election season began. The day after Donald Trump was elected as president of the United States, the creative team for the adaptation of writer Margaret Atwood’s famous dystopian novel suddenly found themselves working on a completely different show.

“On November 9, 2016, people in the Hulu show, who were in the middle of shooting, woke up that morning and thought, ‘we’re in a different show,’” Atwood said at the One Book One Northwestern keynote speech on Tuesday. “Not that anything changed in the scripts, but the frame changed. So instead of being seen as ‘look what we won’t do,’ it became seen as ‘this is getting too creepily real.’”

“The Handmaid’s Tale” was chosen as the 2018-2019 One Book One Northwestern book last winter. The choice attracted significant excitement from the Northwestern community compared to some past book selections.

In her introductory speech, One Book One Northwestern director Nancy Cunniff said it was extremely exciting to see a full house — nearly 1,000 students — at Pick-Staiger Concert Hall. Submissions for the first-year contest to write an essay inspired by the book — which was won by Communication freshman Ashlee Mitchell — saw a 100 percent increase from last year, she added, with 60 essays submitted.

Atwood was joined in conversation with One Book faculty chair and English Prof. Helen Thompson, and the two discussed the enduring resonance of Atwood’s novel, which follows a dystopian society named Gilead. In Atwood’s novel, the U.S government was overthrown as women were forced into an extremely subjugated existence in which they are considered the property of men.

The two mentioned the book has gained a new cultural relevance after the 2016 election. After Trump took office, Thompson said the books saw a huge surge in sales and the iconic red-robed handmaid outfit became a symbol of protest for women both in the United States and in other countries.

The two talked about the new ending of the 2017 Audible version of the “Handmaid’s Tale,” which included a Q&A about what could lead to a new Gilead — even in a stable democracy — that discusses hot-button issues such as income inequality, environmental crisis and demographic pressure.

When asked how this represented her shift in perspective from when she originally wrote the novel — in which Gilead achieved power through a violent coup — Atwood said she wanted to represent the different ways totalitarian states can come into power. While they can do so through an overthrow, someone may also take power and instead dismantle democracy from within.

“The tools of democracy can be used against it — and frequently have been,” Atwood said.

Atwood did not exclusively talk about her novel in the context of modern political events, however; a significant portion of the discussion was devoted to how World War II had an impact on its creation.

The war, Atwood said, influenced how she wrote the main character, Offred, as a normal person stuck in extraordinary circumstances —the same position some people found themselves in during the global conflict. Atwood added that this influenced her decision not to make Offred into a “woke” activist, but rather a human character with human flaws.

One Book One Northwestern fellow and Weinberg senior Meredith Belloni said she found the discussion of World War II interesting, as she did not expect the event to have played such a huge role in Atwood’s novel. However, she said added that it made sense given that Atwood’s writing was based on the experiences she knew at the time — rather than the lens of modern-day political issues.

“She wrote this book in the past, not knowing what recent politics would come to be,” Belloni explained.

At the event were volunteers of the anti-Trump organization Refuse Fascism, several of whom donned Handmaid robes.

Volunteer Lina Thorne said the organization had worn the robes during protests unrelated to Atwood and that members attended the event because they felt Atwood captured the horror of what women could face in completely theocratic societies.

Thorne said she enjoyed the discussion and appreciated the historical insight Atwood provided. She added that she agreed with Atwood about how relevant the current show has become since Trump’s election, and how that has informed her and others’ viewing experience.

“People are watching that show and are absorbed in it because of the context that we’re living in right now,” Thorne said.