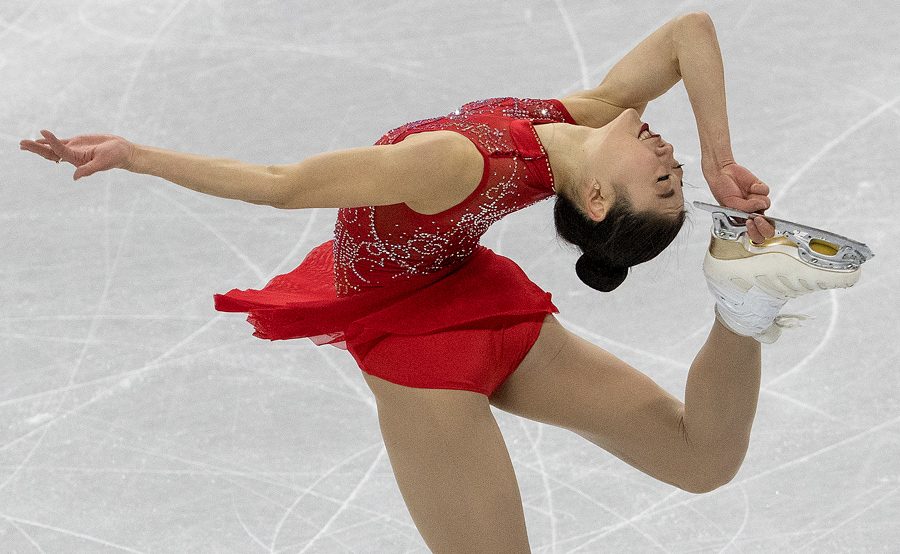 Mirai Nagasu skates at the 2018 Winter Olympics in Pyeongchang, South Korea. Nagasu became the first American woman to land a triple axel at the Olympics.

Olympic bronze medalist and figure skater Mirai Nagasu will be on campus in November as the Chinese Students Association’s fall speaker.

Nagasu, who won a team bronze medal at the PyeongChang Winter Olympics this February, was the first female American figure skater to land a triple axel at the Olympics.

“This is definitely history, or herstory, whatever way you want to put it,” Nagasu said after her performance at the Games.

The jump is one of the rarest in the sport — it starts on a forward-facing takeoff and comprises three and a half rotations — and the only American woman to land it in international competition before Nagasu was Tonya Harding, back in 1991.

Since going to the Olympics, Nagasu and teammate Adam Rippon appeared together on a special athletes season of Dancing with the Stars. Nagasu was eliminated in week three of the competition, while Rippon went on to win.

Weinberg sophomore Allison You, who is CSA’s co-chair of programming, said her co-chair had emailed Nagasu’s agent earlier this year to see if she could come to campus, but did not receive a reply. Eventually, You said, she direct messaged Nagasu on Instagram.

She added that CSA will advertise the event to other groups and schools in the area to hopefully attract a wide audience. Nagasu will speak on Nov. 10 at 2 p.m. in Harris Hall. The event is free to Northwestern students.