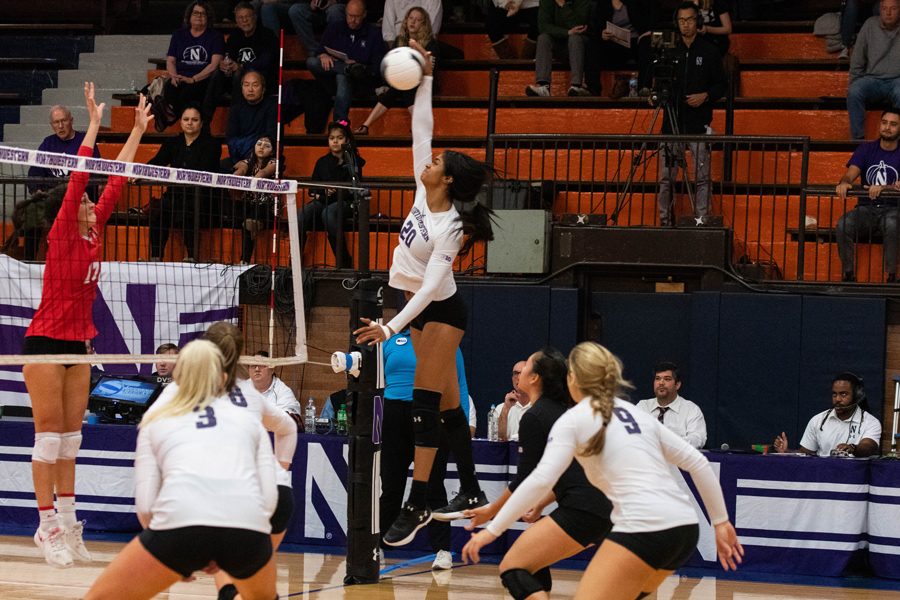 Northwestern dominated in a three-set victory over Ohio State on Sunday in its final game at Evanston Township High School’s Beardsley Gym.

The Wildcats handed the Buckeyes their fourth straight loss Sunday. Following its five-set thriller over Iowa on Wednesday, NU (13-11, 3-9 Big Ten) is on its first Big Ten win streak of the season after Sunday’s sweep over Ohio State (12-12, 3-9 Big Ten).

“We did a great job of serving and passing,” Davis said. “We were able to serve them out of system, which allowed us to be good with our blocking defense and transition.”

In addition, NU utilized a very balanced offensive showing in the win. Highlighted by sophomore middle hitter Alana Walker, five different Cats had at least five kills throughout the match.

It was Walker who came away as the standout performer for NU, though. Walker had an efficient 10 kills on 14 total attempts, including several clutch kills in both the second and third sets, and a victory-securing block over Ohio State’s Vanja Bukilić.

“We knew we’d have to come in and dominate from the start, and bring a lot of energy,” Walker said. “We jumped on them from the first serve, and had a lot of confidence.”

After jumping on early leads and cruising to dominant wins in the first two sets, the Cats and Buckeyes exchanged points back and forth throughout much of the third set. After eight ties and three lead changes, NU found itself tied with Ohio State at 19 before pulling away and winning seven of the final eight points to close out the match.

The Cats delivered in their last game at Evanston Township High School’s Beardsley Gym, which played host to NU since last season, as Welsh-Ryan Arena underwent a $110 million renovation. The new Welsh-Ryan Arena is set to open this week, and host the remaining four home matches for the Cats.

“Welsh Ryan Arena is going to be an amazing experience for our team and our fans,” Davis said. “We’re really excited to get things going in there.”

As excited as the team is to move into Welsh-Ryan, Walker and freshman outside hitter Ella Grbac both said they will cherish the memories the team made at Beardsley Gym over the last year.

“We’ve made a ton of memories in this locker room (at Beardsley)” Walker said. “It’s a really homey space that’s been nice to play at.”

The Cats will look to use the momentum of their last two victories as they continue to improve in conference play. NU’s next game comes at Maryland on Nov. 2, before heading to Columbus to once again battle Ohio State.

“We have a ton of confidence going into our next game against them,” Grbac said. “This was a really good win to have under our belt.”