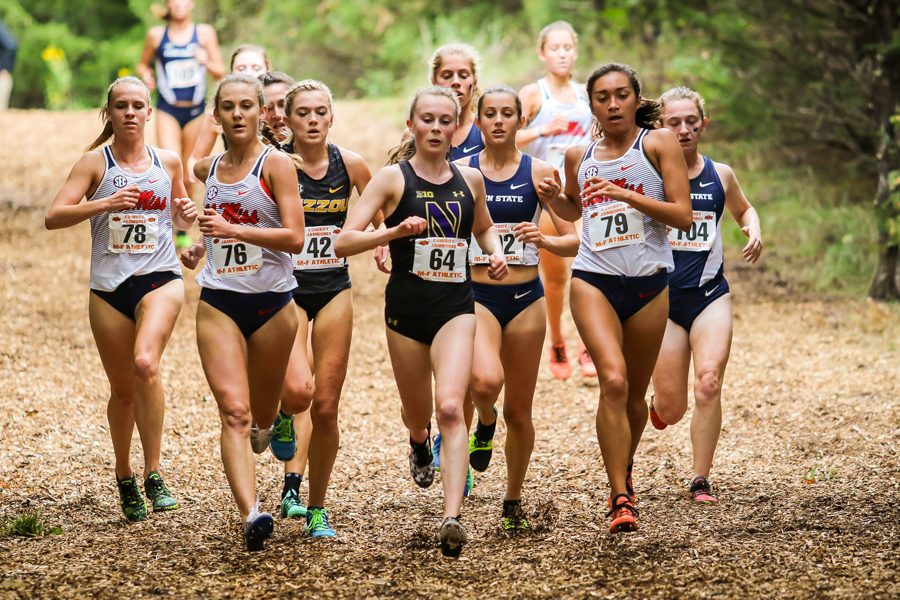 Aubrey Roberts leads a pack of runners. The junior finished in second at the Big Ten Championships.

Pack running, personal records and a program-best performance — Northwestern hit all three as the pieces came together on the brisk, bright morning of Sunday’s Big Ten Championships.

Improving for yet another year in team standings at the conference championships, the Wildcats took seventh overall, finishing with 200 points, 33 behind sixth-place Minnesota. The placement, led by a second-place finish by junior Aubrey Roberts, was the best since NU grabbed seventh at Big Tens in 2012.

“Winning (individually) was something I was always thinking about,” Roberts said. “There’s a lot of talented runners in the field and it can be anyone’s day any given race, but I just wanted to set myself up in the top group, try my best and see what happened.”

Her time of 19:58 was less than 10 seconds behind first-place finisher Alicia Monson from Wisconsin. Roberts — who placed sixth at last year’s Big Tens — went out with the lead pack through 1K, and gradually improved her place throughout the Mahoney Golf Course loop.

Coming into the race, Coach ‘A Havahla Haynes said there were two options — either someone would push the pace early on and Roberts would stay with them, or she’d have to do it herself.

And that’s exactly what Roberts did.

She crossed the 5K in first — with Monson .01 seconds behind — as the two gained distance on what was once as a tight clump of runners. Through the final straightaways, Roberts battled with the Wisconsin junior before falling behind to still break 20 minutes and snag a career personal best.

The Wildcats, Haynes said, came to Lincoln grappling with a range of illnesses; yet, they walked away posting one of the strongest performances from their top six runners of the season.

Behind Roberts, fellow junior Sarah Nicholson took 36th individually after finishing in 21:06. Freshman Sielle Kearney placed 51st with a time of 21:35, followed closely by senior Isabel Seidel and freshman Rachel McCardell who crossed the line in 61st and 63rd, respectively.

NU finished well ahead of eighth place Ohio State after the squad was outshined by the Buckeyes — falling 25 points behind them — at NCAA Pre-Nationals earlier this month. Each of the six teams beating the Cats in overall standings were ranked top-25 nationally coming into the weekend affair.

Moving up to fourth in regional rankings, NU now sits behind Big Ten foe Minnesota, as well as Oklahoma State and Iowa State.

Approaching the Nov. 9 NCAA Midwest Regional, Nicholson said the newcomer-heavy squad will look for its freshmen to continue making a difference. Challenging the Golden Gophers to make a run at an NCAA Championships bid, she said, sits atop NU’s priorities.

“They’re really strong but (we’re going to) focus on the depth of our team and making sure our three through five runners are staying in contact with them,” Nicholson said. “If we’re able to, that gives us a good shot at Nationals.”