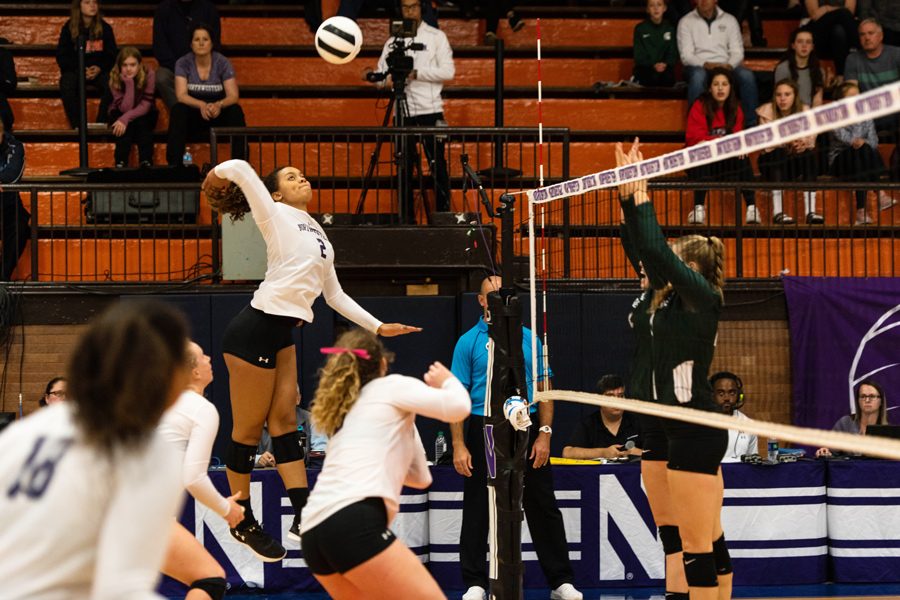 Abryanna Cannon swings for a kill. The freshman outside hitter had 12 kills.

On Sept. 30 at Beardsley Gym, Northwestern fell to Iowa in a tightly-contested five-set match.

On Wednesday in Iowa City, the Wildcats returned the favor.

“This was definitely a revenge match for us,” Robinson said. “You could really see our determination. We came out firing in the first set, second set and all the way through.”

The Cats led the first set wire to wire, opening up a 12-4 lead early on. Iowa went on a 6-1 run to pull within 13-10, but the Hawkeyes would get no closer. Robinson, sophomore middle hitter Alana Walker and freshman outside hitter Abryanna Cannon each had three kills in the opening set. Walker’s 15 kills in the match were also a career best.

The second set was a marathon, featuring 12 ties and six lead changes. NU appeared on its way to going up 2-0 with an 18-13 lead, but Iowa stormed back, and neither team could secure the winning point. The Cats staved off five Hawkeyes set points, while Iowa repelled three chances for NU to win the set before Cali Hoye, who had a match-high 30 kills for the Hawkeyes, finally put it away.

But the Cats responded to the frustrating second set by dominating the third. NU led 6-0 and 9-1 early; Iowa got as close as 22-18 late, but the Cats got three straight kills from Robinson to finish the set and go up 2-1.

“It was really good to see their ability to reset and refocus, to have a hot start in set three,” coach Shane Davis said. “They were disappointed that we let (the second set) go, but it was the way they bounced back and their confidence, the way they approached the next set was something that we haven’t really seen this year from this young group.”

NU never really got going in the fourth set, with the Hawkeyes leading nearly the entire way, but the Cats had plenty left in the tank for the final set.

The turning point came with NU ahead 7-6, when Robinson took over. She had kills on six of the final 10 points of the match, and was serving on match point when Iowa committed an attack error.

Bommer set up all six of Robinson’s fifth-set kills. Her 69 assists were the eighth most in program history, and the most by an NU player since 1997.

“We kind of play with a chip on our shoulder,” Bommer said. “People dismiss us as being too young, too naive, too inexperienced. We don’t let that deter us, and we play how we know we can play.”

The Cats hit .321 as a team to the Hawkeyes’ .238, and had nine service aces to Iowa’s three. After dropping eight straight to open conference play, NU has now won two of its last three after beating Michigan State last Friday.

Davis said the team can use this win to build momentum for the rest of the season.

“This is a high-quality team in Iowa and this is a really big confidence booster for our young group,” Davis said. “I think we’re going to see more confidence in their play.”